Nadja - "Memory Leak" - Ambient doom-metal will be what all the kids will be listening to this year, assuming someone invents an ambient doom-metal haircut. Here's 16:27 of the plodding, crashing, swirling and at times whispering of ancient dinosaurs reawakening on a chilly sun-glaring morning. Kinda like driving to work in DC and dealing with people with Virginia liscense plates. In fact, I listened to it while driving with my eyes closed and failed to fall asleep so something must be going on.

Navruz - "Navruz" - From Uzbekistan, Navruz will be playing their 2000 year old instruments on Saturday evening in one of the few world music showcases. But just as Nadja is music for meeting the urban dawn, Navruz is music for the rural early morning. And just after I wrote this, I found out Navruz stands for "New Day" in Farsi and is the Zoarastorian New Year's Day celebration on March 21st. So get an early start. 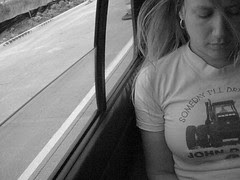 The Naysayer - "Silent Night" - Wow, Ms. Naysayer (pictured, right), way to go, desecrating this over-revered Christmas song into a gripe about too-tight pants. "Hope you'll forgive me, if I got the words all wrong." No problem.

Noahlewis' Mahlon Taits - "Street of Dreams" - Music for sitting on the porch and listening to on an ancient radio. Big surprise that this quiet de/reconstruction of American depression-era pop comes from a Japan lo-fi group. Well, not that big of a surprise.

Nobody & The Mystic Chords of Memory - "Broaden a New Sound" - Sunny California pop like Mamas and the Papas always struck me as having an undercurrent of evil, cult family connotations. This group succeeds in only strengthening that stereotype. But at least cultists are usually smiling and singing, even when they're cutting your guts out.

Novillero - "The Hypothesist" - I was on the fence for this one, but eventually the portion of this that pays tribute to the 60's Philly soul sound overwhelmed my misgivings.

The Octopus Project - "Tuxedo Hat" - Funny uniforms and rabbit ears won't make you the next Flaming Lips especially if you are an instrumental group, but searing hooks, tense combo interplay and carefully chosen musical climaxes just might. Kinda reminds me of a more playful and less dorkish Saxon Shore. Apparently, they got a Coachella gig thanks to a Myspace contest.

Odiorne - "Sirocco (Heavy Wish)" - Where Jim Chambers' (ex-Mercury Rev) has made his home since 2001. Has a similar big sound to Rev but with a dash of early Pink Floyd.

Oh, Beast! - "Outroduction" -A heavy-ass Austin band that I'm sure all the locals hate because they're annoying and loud and barely know how to play their instruments. And those are the good thing about them. They also all have facial hair. That's the bad thing. Check this out to get a good sense of where they're coming from. 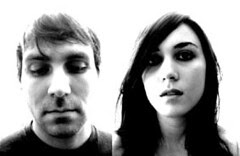 The Owls - "Air" - This is a song that I seem to love during lunchtime but hate when I got home. Right now I'm liking it. It's got that delicate side of Velvet Underground ("Stephanie Says" or Moe Tucker stuff) feel but with some keyboards might have been a more girly YLT or Stereolab.

P.O.S. - "P.O.S. Is Ruining My Life" - Hey, this is my second rap song so far of this great and insane SXSW Mp3 plow. Has a great punk-noise feel to it and none of the cliches I normally hear in the genre these days - seems to be inspired by the better demons (the non-gay/women bashing demons) of Eminem.

Palaxy Tracks - "Grey Snake" - Apparently, SXSW will be the last Palaxy Tracks show as a band as the singer/songwriter is moving to Austin and the other dudes are staying in Chicago. He (Brandon Durham) is joining Octopus Project (above). While this may have that standard indie pop-rock feel to it, it distinguishes itself with a forceful arrangement and that fact that it's based on a ghost story by Raymond Carver.

Peter and the Wolf - "The Fall" - First heard this on Gorrilla vs. Bear and made it a linchpin in a mix-CD of appocalyptic songs. This is like Iron and Wine writing songs for the The Day After or The Postman. Not totally sold on his voice but this is a fine piece regardless. 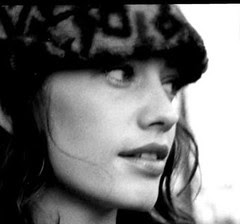 Pieta Brown - "#807" - Some nice and pretty singer-songwriter stuff from Ms. Brown (pictured left). Again, comparisons to Iron and Wine can be easily drawn.

Pilotdrift - "Bubblecraft" - One of the strangest confluences of streams in this set - think about the din that might be created if Wayne Coyne, Chris Corsano (drummer for Six Organs last release), Burt Bacharach and the guy who wrote the Theme from Charlie's Angels got together for a jam.

Pink Mountaintops - "Rock 'n' Roll Fantasy" - More fun in the rotting forest with Stephen McBean. Every one of his songs deserves repeated listening.

Polytechnic - "Pep" - A Go-Team-ish pop song that climbed onto my hard drive, broke open a stick of bubblegum and insisted that it should not go unnoticed.

Poni Hoax - "Budapest" - In case you wanted to know what happened when Romeo Void had Boney M's love child.

Pony Up - "Shut Up And Kiss Me" - I almost didn't include this cutesy novelty la-la song but it drew a belly laugh from me when the girl tells her boyfriend to just shut up and "let's be dumb / I'll show you how." So, I'll let you decide whether its fluff or worth a place on your playlist.

Pterodactyl - "I Can See A River" - I gotta keep my punk cred, right? RIGHT? This headache-inducing screamer will burrow into your skull and actually make you see that river... and it's a stinking, polluted moving scum stream filled with rotting cats and half-eaten birds.