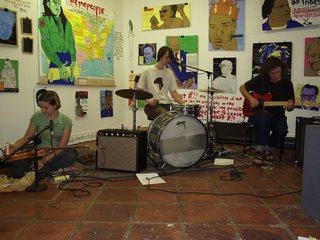 What I said back then about "Holy Train Wrecks": "Weird Weeds use acoustic guitar folk as a jumping off point to make what is in its essential "art" music - here describing the quiet before and after an accident."

Hype Machine Buzz: Low to Medium... Well-liked on popular MP3 blog GvsB (their second appearance) but more likely to be seen in MP3 blog mixes such as the recent Communications Major mix here.

Mp3s:
"The Butcher" from This is What You Want EP - entire album available for download here
"Ribs and Wrinkles" from Hold Me -- more downloads here
"For You To See Me" from most recent release Weird Feelings

Photo taken from and instore at Austin's End of an Ear record store - they got a ton of other band photos here and here for your viewing enjoyment.