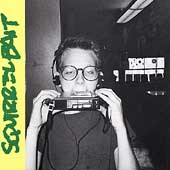 I know that kid on the cover of this record. He's the one that was at the bottom of the hill - you know the hill, the one where shit rolls down from. If you were "lucky", you were a few feet above and got to pile your own turd-balls on the poor geek (whilst simultanously dodging the work product of the lucky others). You suspected that there was maybe more to the kid than he let on. He was always in his own little world and seemingly oblivious to the taunts and torments dreamed up for him. Little did we know he was just looking forward to when he went home, strapped on a guitar or a grabbed a pair of drumsticks- or turned on his computer keyboard or fired up his video games - and all his revenge fantasies could be purged. He's the Elvis Costello, the Kurt Cobain, the Bob Mould, heck, the Colin Meloy and Rivers Cuomo. Yep. And there's only one thing worse than teenage angst and that's teenage nerd angst. And while most teenage angst records are plagiaristic or, to quote Fitzgerald, "marred by obvious supressions", this record has it down in sonic geniune boatloads...

David Grubbs, the guitarist and probably the principal songwriter said about this record that "it all came crashing together quite well... whereas [ Skag Heaven (the 2nd LP) didn't ] have the same gel nor similar snapshot-accuracy". And I think this has to do with the intensely personal nature of this record. One senses a deep, although temporary, connection being made among all the band members that may have evaporated by the 2nd LP. I don't sense the same level of intensity in Skag Heaven although it also explores themes of the downtrodden and abused, albeit in the third person. Squirrel Bait, the EP, peers in this respect where the Rites of Spring LP and Zen Arcade.

Yes, Grubbs - crash it does and smash, mash, thrash, gnash and clash as well. Funny how all those words rhyme, innit? Oh yeah, I forgot bash. As in bash in that bully's imaginary fuckface with my guitar - in front of that girlyoulike who saw you getting humiliated by him, verily in front of everyone in school and your brothers and sisters who heard the rumors. There's an inner tough guy in all nerds. Just ask those guys in that movie. Just ask Steve Albini, who befriended the band. While I don't know for sure whether this was the intent, that revenge fantasy is exactly what I get from "Hammering So Hard." And while I won't relive my own torment, I remember hearing almost exact lines like: "I'm going to beat you up at the end of this," and feeling that my problems (and fantasy solutions) were the be-all end-all and above everyone else's. The song mirrors that emotion from the the excited breathe-in / breathe-out of the stop-start thrash verse, the angry stabbing chorus and the finale where everything goes into slow motion as your revenge fantasies climax.

Then there's "Sun God" which is the strangely realist flipside of dealing with that teenage pain. "Take it away" wails singer Pete Searcy in that post-pubescent growl of his like he's in some sort of Garden of Gethsemane - yeah, that's how big these things seem to be, don't they. We can laugh at it now, I guess. "Take it away" is the wail of the guy who realizes that he can't have it all, be the perfect specmen of manhood, be the top dog, the "sun god" of the campus. This song also appeared The Wailing Ultimate (how appropriate!) compilation in 1987 and, for many, was the introduction to the band. Damn, it was a genius choice by Mr. Cosloy and the band. And while I'm not the first to note the parallels to this and Nevermind, I do think that "Sun God" is like Nirvana's "Lithium" but without the lithium. This only makes it more real and the latter song more flat in comparison.

Overall, this record is still a pleasure to listen to, as is most of this record even if it is painful to remember what being 16 years old was like.

This is required for every decent indie-punk 80's collection, doncha know? The most recent reissue was in 1997 by Drag City and was overseen by David Grubbs himself. It reportedly includes liner notes by Grubbs and inner sleeve pictures of the band in its high school nerdliness.

It is still in stock and you can buy it directly from them in either CD or 12" EP format.
Posted by Jim H at 5:06 AM

I'm 16 myself, right now. And yeah, it sucks just as bad as you remembered...

And wow, these songs fucking rule. It does sound quite Cobainey. I'm definitely going to pick up a copy of this...thanks, Jim!

Ah, you're welcome. Always great to hear that people like this stuff.

I didn't mean to imply Pete Searcy's voice, which is quite unique, or guitar playing was like Kurt's - more like the song style of tension/release verse/chorus combined with punk sensibilities was similar to some of Nirvana's songs. Husker and RoS are the only others I can think of that were doing this prior to Nirvana. Can anyone else?

Interesting read, I always liked this one better than Skag Heaven too. It's been awhile since I listened, but this still sounds pretty fresh.

As for the picture, you sure that ain't a younger pic of Albini himself? Kidding...

One of the first posts in my blog was about Bastro (David Grubbs's post-Squirrel Bait band), but I haven't heard much Squirrel Bait yet... I don't hear much of a connection between this and Bastro, but then, David's a tricky guy.

If you're a fellow Grubbs aficianado, you might want to check out my Gastr del Sol site... http://www.bitmine.net/~gnat/gastr.html

Not to be a name dropper but I knew Dave through a mutual acquaintance and had the pleasure of chatting him up a few times while he was living in DC. Nice guy - glad he has followed his muse.

Oh yeah, thanks for the link. I'll recip.

Man,still one of the best records ever...waaaaaay better than Nevermind in my book!

Great EP, but Skag Heaven is the masterpiece!