A note about my absence...

Last night my Mom died peacefully after about a month's struggle with one of the most virulent forms of cancer known to man. Although we saw some of the symptoms in April, the disease wasn't diagnosed until early May and here we are several weeks later. We had hope that her life might be prolonged for several months through the advanced therapies available today, but I am happy to remember that she was able to have a good quality of life in her last month and saw her oldest grandaughter graduate from college. I got to spend some time with her in the last month but not nearly enough because I thought there would more time over the coming year. The disease had other plans.

Thankfully, her time in unconsciousness wasn't long and yet we all got to say goodbye. As in all times like this, I am struggling with many emotions and I veer from a state of hopefulness in the renewal and reunification that a death in a family brings and deep sadness that this dear woman is gone to me and those to whom I am close. The night before her death I had a dream that I was helping raise her from a pool of water into the arms of people I did not recognize. And the next day I was whispering in her ear that it was alright for her to go.

O grant us thitherward to tend
And with unwearied hearts ascend,
Alleluia, Alleluia. 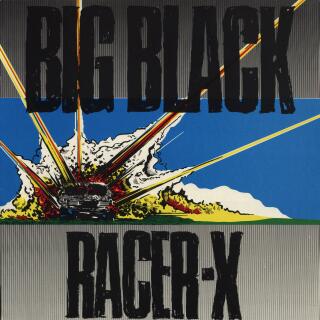 In my younger and formative years, the fascination with things like the limited edition Headache/Heartbeat autopsy picture (don't click on that) would have had me running to the record store to be the first kid on my block, etc. Now, having seen and tasted the world, I find I have a more retiring nature. In other words, I've grown as lame as the people I once decried. Violence, gore... eh, so what?

While I accept (per Girard) that violence may indeed be the heart and secret soul of the sacred, I can no longer bring myself to care. It's enough to get up in the morning or enjoy those occasional rewards of joy or pain or both without wallowing in it. But let's meditate on violence and song for at least a paragraph. After all the two have been intertwined since Orpheus got his rotten bitch head lopped off. Troubadors were the pre-modern equivalent of media ultraviolence. Marrying loud noisy electric guitars with songs about violence comes as a no-brainer. Most of the other peer bands to Big Black were doing it -- Sonic Youth took a more literary bent, Killdozer went for the joke, Live Skull went for the abstract and Rifle Sport, well, copied what everyone else was doing. Big Black just took it all, mixed it up with an industrial, faux-funk blend and turned it up real real loud. It's no wonder that Steve Albini and Santiago Durango's guitars are labelled "the knife" and "the hammer," respectively. Of the six songs here, four seem explicitly about violence -- about being killed ("Sleep"), revenge killing ("The Big Payback"), someone thinking about random killing ("Shotgun") or someone who would like to kill ("Deep Six"). They are the Reagan year equivalent of the broadside ballads -- subversive, at times funny and you would probably get arrested or drug tested if you admitted to listening to them.

But screw all that songmeaning crap -- it's the three guitar attack and the recording itself that brings me back again and again and again. Listen to, for instance, "Deep Six" where the horror of the regular truck driver guy - or Albini says in the liner notes "the whole of man's experience: sex, hate, pain, money, liquor, food, pride, humility, ambition, weapons, waylon jennings, dick size -- everything" is encapsulated into the dichotomy of the "knife" and the "hammer" doing a grimy call-response over a pumped up bass (Naked Raygun's Jeff "gigantor" Pezzatti), Albini's "neck knotted" vocals, a multi-voice chorus (!) and a hard shuffle-stomp beat. Pure magazine, indeed.

For what was reportedly a fairly lo-fi set-up, the engineering of this music is near flawless to my mind -- or at least, eminently appropriate to the songs. The only thing that holds the band back, for good or ill, is the limitations of the drum machine (a borrowed Roland Mach V). Later, the recording and programming (and I think the model) of the machine would significantly upgrade. I also think the six song EP was probably the best format for the band. It's only in Atomizer (the follow-up that the band rightly predicted would "make you shit yourself" in the Racer-X liner notes) that they put together a collection of songs that could withstand the length of the format.

I'm probably in the majority by saying it's the title track that I most love to death and holds up the best (I dare any DJ to throw it on and see if it doesn't get a big reaction). "Racer-X" starts with a pounding rhythm, Pezatti's "gigantor" bass slap and Albini's narcotic haze mumble and then explodes into a tornado of guitar noise. Those ensuring that "racism" is not present in any shape or form in modern music will likely object to Albini's reference to "cartoon Nips" and I'm not here to defend it but as a kid, that goody two-boots Speed Racer and his menagerie of synchophantic dullards annoyed me to no end - I would have called them cartoon nerds but I guess it loses some bite. All my moron "friends" watched the stupid show after school -- while I preferred Dark Shadows. In retrospect, not sure which is lamer.

In the song, the "hero" is Speed's villian brother - Rex - who is reimagined as "just a regular guy...doing his goddamn job." Rex also has a little drug problem (his speed comes from a "little glass jar") and Daddy issues ("Shut up Pop") that are only magnified by his asswipe race winning perfect brother. Rex is the perennial loser, but he's got way more cool than the blank-eyed Speed Racer can ever hope to muster in his most vivid four color cartoon dreams. Kiddies, everything they told you was wrong.. QUESTION ALL even imported anime characters that play on cable channels at 4:30PM in the afternoon. How fucking subversive is that?

Links:
Liner notes, fanzine reviews available at the Dementlieu Big Black site. I also stole the cover photo from them.


BUY:
All these songs are available on the Hammer Party CD. Life is pathetic for you if you don't have this in your collection in some shape or form. T&G Hammer Party
Posted by Jim H at 12:03 PM 3 comments: 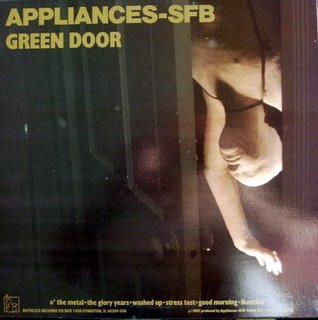 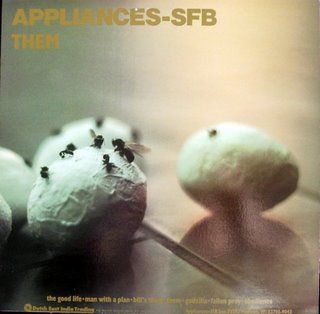 Most notable in the mix is Tom Laskin's gymnastic vocals -- ranging in style from baritone crooner to Gibbyish derangement to adenoidal headbanging --- and William Siebecker's relentless GRRR-tar and his ability to jump genres from song to song. Part of the reason Siebecker's guitar sounds so big is the welcome decision to place Bill Feeny's synthesizer in the background to create a sort of background effect that only peeps out of the mix during climaxes. If you didn't know the band had a synth and were just casually listening, you probably wouldn't even notice it.

There's a temptation to try to assign copycat labels to the band -- the song "Washed Up" with the slinky 5/4 beat, vocal barking and tinny guitar riff suggest cribbing off Killdozer but I read an interview with Michael Gerard in which he acknowledged that it was Appliances-SFB that influenced him, not the other way around. Another song "Good Morning" sounds almost like it was stolen from the back of the Butthole Surfer's van -- and yet... the lyrics turn out to reject the notion that a life of indulgence is in any way the answer: "I pick up on my endless search for fun / and so the ball starts rolling / and I can't let it get behind me / and God forbid that day should come" -- hardly an attitude the Buttholes would have copped back then. "Them" also seems to have a clear tip of the stogie and fedora to the Naked Raygun / Big Black school of punk, although slowed down, shorn of almost all UK artrock tendencies (w/the exception of the vox track) and given a whole 70's metal sheen. Likewise, there's some of that midwest urge to emulate Ohio Players (reference: RC Mob) and merge funk with the punk, often resulting in a noisy splatter ("Ikeandtina") that the recording engineers (including Butch Vig) can't keep up with. I also don't like Laskin sounding a little bit too much like Buster Poindexter at times. It's got good lyrics but its really the only song the really falls flat for me.

"The Glory Years" is a good example of their humor comingled with sports, the song is in reference to Green Bay Packers fans wallowing in their glorious Bart Star past. Lyrics are apparently adapted from the team's song and framed by a Jim Carroll Band / Lou Reed narrative about what happens when Packers fans grow old. Clever shit. Less so are their multiple send-ups of metal ("O' the Metal" and "Godzilla") - not sure who started that with these bands but it almost became a bit of a cliche for the alternative bands to have a "metal mock" song. Methinks the bands protested too much and while the tone is mocking, they sound like they're having plenty fun with the genre, however insipid it had become by that time. But then, all is forgiven for "Bill's Thing" - a mash-up of a Captain and Tennille song lyric and some hairy 70's rocker whose name I can't remember. While Killdozer made lots of hay covering 70's schlock, Appliances-SFB take it to a whole new level of both copyright law and creativity. Bill Laskin self-mockingly singing of that line that he "never wanted to touch a man, the way that I want to touch you" works on so many levels -- first just as some damn good blues-rock-scat singing, then as sort of a man driven crazy by his closeted tendencies and then just as sort of an excuse to make some funky head-banging racket. My fave song on the album.

Then, there's the Pigfuck, daddy... oh, make it all go away. Or not. I mean "Man with a Plan" is about a "pig man / short and stout", who's "plan" is apparently to just grow fat and grovel in self-degradation. Nooooo.... "Obedience" takes the pigfuck staple of equating men with animals and mixes it with their booty-shaking spin - call it pigfunk. Or don't. Just run away screaming. Finally, given that this was the era of post-hardcore, we have the one song sung by the guitarist, "Fallen Prey" which, with a few tweaks, could have appeared on an early Die Kreuzen record.

In the end, this is almost all-good, despite the limitations of the recording and the band never getting the reknown of their peers from the time. The band formed in the '70s and broke up in the early '90s. 2004 saw the release a collection of unreleased early 90's material (3rd and Long) and is still available at CD Baby. Currently the Feeny brothers are in The Reptile Palace Orchestra and singer Tom Laskin writes for Isthmus (Madison, WI alt-paper) and is listed as an author for The Nation.

This album (actually a split-EP?) is out of print - selling on the net for about $30. There's a short video clip of Appliances-SFB and other Midwest bands (including Die Kreuzen) at the Milwaukee Punk Posters site. See Laskin shaking that butt and charming the audience.

Songs (all transferred from vinyl, so forgive the audio limitations):
"Washed Up" - Laskin
"The Glory Years" - music by Siebecker, words "traditional"
"Good Morning" - B. Feeny / E. Feeny
"Man With a Plan" - Laskin/B. Feeny (the song is supposedly covered by Reptile Palace Orch)
"Bill's Thing" - B. Feeny
Posted by Jim H at 6:40 PM 12 comments: