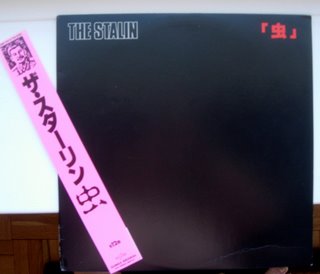 I don't know about you but there's nothing that can better get me out of the slump (besides old Angelina Jolie movies and Cab Calloway) than Japanese hardcore... and there's none better at the genre than the insane The Stalin fronted by the even insaner Michiro Endo. Japanese hardcore, like most shinto adaptations of outsider culture takes things to a ridiculous and almost spiritual level in their zeal. I swear that on some of these songs, the guitar strings vibrate like the they are the hinges on the impossibly large Gates of Heaven. That's how BIG Japcore is/was/willbe.

As a coming back to the blog treat, I'm going to post almost the entire album since its so hard to find and way out of print, so far as I know. My version is the non-picture disk (the picture disk comes with an image of the Japanese Samarai hero that the LP is named after) that came out as a reissue on Japan label Climax -- and yes, as you can see I still have the little pink sash thingie that comes on alot of Japanese vinyl -- it also comes on CDs in a way but it's hard to maintain. The sash thing just wraps around the album. In addition to their embrace of rock and folk genres, the Japanese also are the kings of cool packaging of music.

Side 1
Track 1: Mercury (Suigin)
-- not my fave track but a good enough med-temp opener that opens up the eardrums and prepares one for the mayham to commence...
Track 2: 365
- now we're talking... makes you want to throw yourself into a wall, like almost all good 'core should...
Track 3: Dorobo (The Thief)
Track 4: Tempura - nah on the sushi... it's alright but always makes me thirsty and even more hungry, though... tempura quenches my hunger and tastes best with rice wine... oh the song, as 'core goes, it's a throwaway but still quite ear-bleedingly sonic - love how it all falls apart near the end... (a live rendition of the song from 1985 via youtube)
Track 5: Fifteen - I remember when I was 15. Zits, crappy clothes, couldn't drive, smoked my first joint, handjobs in the backstage, much confusion - the song pretty much captures the feeling
Track 6-7: Sleepwalking - Die'in - I jammed these two together because they were mixed so tight that it seemed a crime to separate them into separate MP3s... "Sleepingwalking" is a typical primal screamer... "Die In" is more of the same. If you don't like Japcore, you'll probably really hate these tracks. I love where both songs take you, though if you have the patience to listen.
Track 8: The Cancellation is Free - While most of their songs batter and bruise, this song sears flesh. Endo was a Vietnam War Vet (believe it or don't, he was pretty old when he fronted the Stalin and is now 58 years old) and I wonder if the imagery I've receiving has something to do with that experience.

Side 2
Track 8: "Go Go" (or "Go Go Stalin") - Slice open those veins, scream with the blood rolling down your legs....
Track 9: Nothing - My favorite cut bar none, maybe my favorite song from this group. There's a sense of forboding yet a melodic line that cuts through it all yet it retains all that essential loud-mouthed zeal of Endo.
Track 10: The Seal (Azarashi) - We must pay for our sins by making loud noises and hitting our heads against the ground.
Track 11: Mushi - More conventional slow metal ... I suspect I may appreciate it more by understanding the lyrics - it's also almost 10 minutes long - confirming that Endo and his band weren't too concerned about adhering to any hardcore dogma. I gotta be in a mood, a dark mood, to really listen to this all the way through... very DOOMish... very metal-ish.... 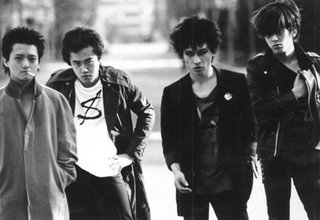 This picture came from a The Stalin fan tribute page. That is Endo second from the right. KFTH's page helped with some research as well. I also used The Stalin wiki's page to get the track listing. Michiro Endo has a web page but I haven't really tried to cut through it. There's also a fan tribute myspace page to Endo. And, of course the myspace Stalin (the band) page.

The Stalin did this for a few years and then tried to break out with a more commercial sound. ... there's a wonderfully weird video that recalls The Ramones in Rock and Roll High School out there on Youtube...

PS Much love to all that left messages of condolence and I would also like to dedicate this post to Jane Hamsher who also recently lost her motherwho is caring for her ailing mother.
Posted by Jim H at 9:05 PM 2 comments:

I'm doing okay but need some more time... until then I ran across a new track from the next Yo La Tengo album. ...one thing my Mom and I bonded over last year was Tengo's Summer Sun CD - out for a drive when I took her shopping. I was planning on giving it to her next time I saw her.

As a kid, we also had a beanbag chair - but then didn't everyone in the 70's?

Anyway, thanks for all your supporting comments in the previous post.
Posted by Jim H at 9:11 AM 1 comment: