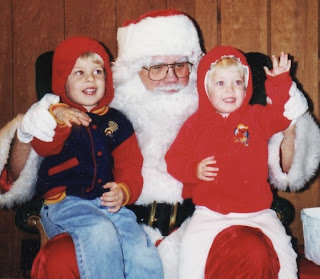 It being the holidays and given that its a tradition at so-called MP3 blogs to give shit away that isn't ours, I thought I would be no different.
Here is a ringtone from New Times Viking's free promotional MP3 from their most excellent recent digital, uh, 7" - "Call & Respond" - the ringtone is renamed just "Call Respond"
Posted by Jim H at 12:25 PM No comments:

Silver Currant blog has a 2009 Jack Rose live show for download
And there are some links to Jack's favorite Raga, upcoming release news and tributes sites on Ilx's I Love Music Board
Posted by Jim H at 7:26 PM No comments:

"Which Of You Assholes Ate Christmas!"

Blog about Jenny Mae and the late Jerry Wick (Gaunt)

Bela Koe-Krompecher started a blog about his life with Jerry Wick from Gaunt and Jenny Mae (There's a Bar Around the Corner Assholes). via http://www.citybeat.com/cincinnati/forum/viewtopic.php?f=2&t=505
Posted by Jim H at 7:46 PM No comments: 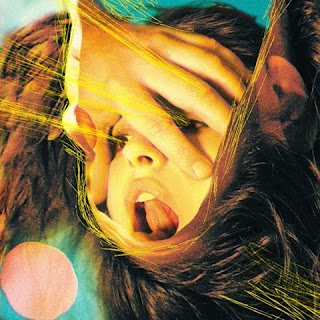 As if you all care... I mean I got delisted from Hype Machine in 2009 and posted maybe 20 times total but hey I'm still here and you know gosh-darn-it I still care.
Fave albums - these are selected as stuff I like to listen all the way through, in order and not get tired and then do it again... the songs hang together -- that's why they call them albums or something like that:
Honorable mention (because not all the songs work): Dark Was The Night compilation album & Steve Earle's cover album of Townes van Zandt songs
Most Over-rated: Grizzly Bear's album that starts with a V
My fave songs tended more towards poppy shit than my fave albums did. Most of these artists had so-so albums lightened up by these great songs and alot of these songs can be found online easily: 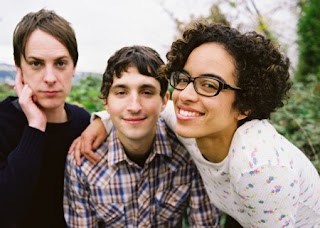 Honorable mention: "Wet Wings" - Dan Deacon (I'm so not on this guy's wagon but this experiment worked well on a mix-tape I made) 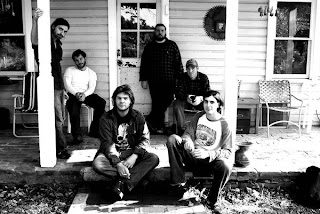 Favorite Shows I Played or Saw:
Most over-rated: The XX on Carson Daly - whatta bunch of moronic deadbeats!
Posted by Jim H at 4:09 PM 1 comment:

Soft Power | MySpace Music Videos
Soft Power is sort of a late 80's "Underground" power / art / guitar band - Nice Strong Arm, Music From Elba, late 80's Sonic Youth but as if rewritten by some German art rock band from the early 80's. The band is fronted by the guitarist and guitarist/bassist who offer male/female vocal tradeoffs on the songs. The drummer ties this band together - innovative beats and knows the songs better than the others. There's a keyboardist who generally provides background with occasional riffs thrown in - I kind of like it when the keyboardist knows how to take the backseat.
The band does some interesting stuff with odd measures. I counted one songs that appeared to be in 15/8 and another that veered from 6/8 to 4/4. The drummer never stumbled on any of this. A band to continue to watch over the next few months.
Versus are a mid-90's to late 90's Teen Beat/Merge who (I think) were once local to DC but now live in Brooklyn and aren't really a "functioning" (touring) band anymore but are putting together a new set of songs. They've got guitar, bass, violin/keyboardist, drummer. They added a fifth member halfway through the set - I think he was covering bass but couldn't really see from my vantage point.
The pros for this band is that half their tunes are an interesting take on post-punk - where the "punk" part is defined as garage punk (so I guess its post-garage punk). These songs (and I can't name them) shimmer and throw in exciting twists at the genre. Richard Balyut (the nerdy lead), while not exactly a likable prescense onstage, does best when he's mixing/harmonizing vocals with the competent female bassist (Fountaine Topps?).
However, the other half of their stuff seems too 90's indie rock and antiquated. The thing is I don't know enough about their music to tell whether this was the old stuff or the new stuff. I'm thinking it was the old stuff I didn't like.
The problem with this band is the drummer. He doesn't know the meaning of loosen up. A kid playing pots and pan in the kitchen plays with infinitely more joy and ease than he does. It's in the wrists man - feel the beat, be the beat, it's like you are trying to hunt and kill the beat. Being as the drummer is the lead's brother I don't see them changing up anytime soon.
Like I implied above, I didn't really "get" the lead singer. He's kind of a nerd who thinks he's cool and I just find that, well, annoying to watch onstage (I don't like Carrot Top either). Judging from my +/- CD collection, Richard Balyut may be better suited for studio work than live appearances.
Posted by Jim H at 10:34 AM No comments: 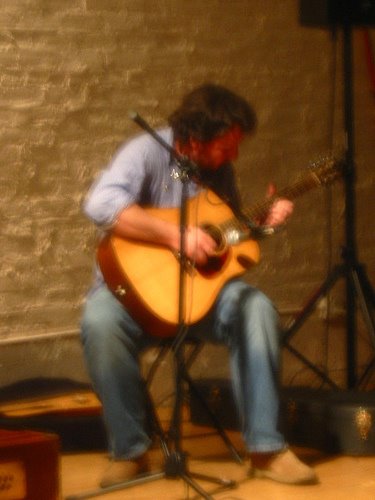 Jack Rose, a renowned Philadelphia-based acoustic guitarist, has died of a heart attack at 38, the Philadelphia Daily News reports.

Rose was born in Virginia in 1971. His professional musical career began in the Richmond noise band Pelt, which formed in 1993. But Rose is best known for his solo work, which he began recording in the early 2000s, releasing numerous EPs and LPs on a number of different labels, most frequently VHF. 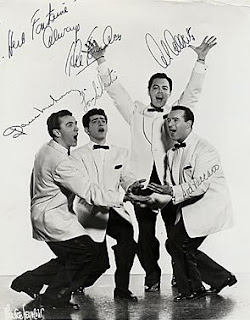 Just was squeezin' out a log in the water cabinet, reading this week's EW and come across the sad, sad news that Philadelphia's Uncle Al Alberts has succumbed. This is indeed the capstone of celebrity deaths this year for me!
As anyone who grew up in the 70's in Philadelphia and watched too much TV, Mr. Alberts curated a weekly show of proto-Jon Benets and 8 year old boys in suits, with spit-coiffed hair, trained to sing like Frank Sinatra. Mr. Alberts and his wife were sort of the local Jim and Tammy Faye except their religion was 30s and 40s show tunes and standards. Hosted on the twisted WFIL Channel 6 (which also featured the perennially sloshed Sally Starr, the ambiguously gay Gene London and legendary sky divin' anchorman Jim O'Brien), Mr. Alberts was just as freakish as the little kidults he hosted every week. Paul Begala could only wish to have his forehead topped by the Conway Twitty style hair apostrophe.
Despite all this, perhaps Mr. Alberts will (hopefully) be fondly recognized not for his Phillie freakshow but as one of the Four Aces whose graceful male harmonies soothe us even to this day.
Love Is A Many-Splendored Thin...
Stranger In Paradise - The Fou...
Image found at http://www.singers.com/jazz/vintage/fouraces.html
CORRECTION: Gene London was on WCAU Philadelphia (the CBS channel). As Wikipedia notes: "Early programs began with Gene London opening the door of his General Store and flipping the sign to read "Open for Business." As the kids passed by Gene, he palmed the tops of their heads and sang the opening theme song."
Posted by Jim H at 5:33 PM No comments: 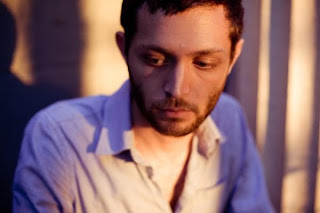 ARMS (Todd Goldstein) photo by Elizabeth Weinberg, June 09
This is lo-fi bedroom closet pop at its best - vocal harmonies mixed with banjo and finger snaps all fronted by a Neil Youngish nearly breaking vocals whining "They lie, they lie to your face / you were in love / you were on your way." The band does shows so there must be a band as well and not just a multi-tracking gargoyle behind this.
Group/project called Arms who released an LP this year that was massively and unfortunately (for them and anyone else who cares) ignored. Guitarist is also with Harlem Shakes but I have yet to hear of them so I just offer that as a factoid.
Here's a direct link to the subject MP3 [Arms - "Kids Aflame"] - but do go to the Arms site and check out the music tab for more. "Whirring" is another tasty piece of home recording for ya.
Posted by Jim H at 6:43 PM No comments: 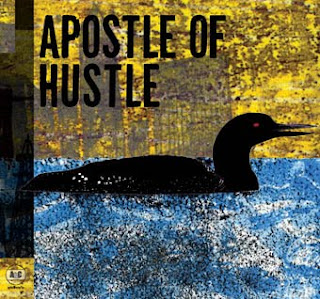 The band of the day is guitarist Andrew Whiteman's Apostle of Hustle from Toronto, Ca - home of the Space Needle and a bunch of fine restaurants and bus stations.
While the 2009 album ("Apostle of Hustle Eats Darkness", great name) was a bit uneven, perhaps too overladen in experiments and concept, this track, which incidentally is free, was the standout.
Not sure whether its the Broken Social Scene ca. 2006 vibe or the amped up drums and vocal recording distortions.
You can download "Soul Unwind" at RCRD LBL - here
Apostle of Hustle website
Posted by Jim H at 9:36 PM No comments: 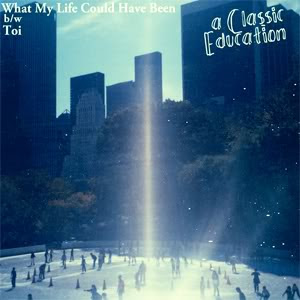 Today's band is an Italian bunch that make wistful yet dark lo-fi pop and cover old classics like "Spanish Harlem".
Anyway, Holiday Records has a digital freebie of their original "What My Life Could Of Been" b/w "Toi", a cover of a song from an obscure 60's movie. It's not the best I've ever heard this week and I certainly wouldn't order you to go out of your way to buy their records until I hear some more virtuosity and originality but it's free and at least worth the time it takes to click.
You can pick up the digital single at Holiday Records and learn more about the band at SoundSXP.
More links:
"Toi" video
Their tiny website streams this single
Posted by Jim H at 4:04 PM No comments: 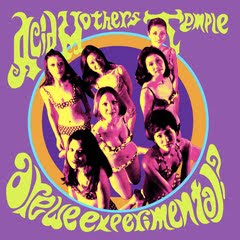 Warning, this music may not make you peaceful and loving as the cover suggests. In other words, you'd be foolish not to plug this into your earlobes prior to, I don't know, sacking a city.
Obvious tribute in the cover above which if you don't get well STOP READING NOW but it they froze Jimi, Noel and Mitch in a single moment of pure acid reflux, this might be the resulting melt. If other purveyors of so-called psychedelic music aren't malevolent as you would have liked and you just felt well lost at sea with it all, then this my friends is your lifesaver even if it is a eye-popping, ear-liquifying, tounge-scroggling noose.
I haven't always appreciated these geniuses too much before but I'm gonna have to stop being such as wuss.
Wired Stinky Pussy Luver - Aci...
Not for the faint-hearted or impatient. Other great song titles include: "Goodbye Big Asshole Emanualle" and "Ultimate Unhip Blues" (Mr. Acid Mothers Temple's guitar here is well real, real inspired - hail feedback and skronk!).
Here's more on Acid Mother Temple
Posted by Jim H at 5:14 PM No comments: