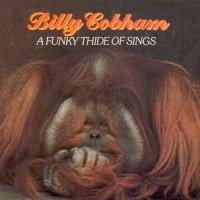 I don't really like this record. Never have. And to be truthful I think I purchased it before 1977 and this blog says its about stuff acquired between 77 and 93 (although if you have noticed it appears its really about stuff made between 85 and 89). But bear with me since it's kinda autobiographical and aren't blogs in the end all about me, me, me?

So... in my misspent youth, I was looking for a drum hero and rock und rollers just didn't impress me too awfully much (until I discovered punk) so I turned to jazz. Cobham, former Miles and McGlaughlin backup drummer, was recommended to me by some hippy drum teacher and I think I bought two of his albums before realizing I had been had by some clueless "fusion" dork. Most of the songs on this record sound like either:

That all said, Cobham may be best known for being among the first to experiment with electronic drums (although not very well IMHO) and innovate with timpani and other non-typical jazz percussion instruments. He also had a very good dynamic range - his soft touch was sweet but he can bang it out when he needs to and not sound too spazzy. If you could define his style, I'd call him a roller - a cat who uses drum rolls in his fills and to produce dramatics. To be fair, the follow-up album to this (Life and Times) was much better.

Luckily, I discovered Gene Krupa (thanks Grandpop), Buddy Rich and Joe Morello. Both Krupa and Rich were punks of sorts. Krupa was the court jester clown laughing at everything while he effortlessly sweats buckets just to prove the existence of God by just beating on some skins. The immensely talented Rich was an angry politically incorrect jerk who used to do karate demonstrations on The Wide World of Sports with a scowl on his face. His bands reportedly hated his guts but he never gave much of a flying fuck - he named one of his albums Stick It just to make sure his critics and enemies got the, er, point. Morello, on the other hand, was the mild-mannered nice guy from the Dave Brubeck Quartet who transcended them all with his light touch and flawless unrepeatable fills and frills. He also knew how to tune the hell out of an acoustic drum set.

But back to Cobham:

"Moody Modes (excerpt)" - This is an excerpt from keyboardist Bulgarian Milcho Leviev's closing piece "Moody Modes," a freeformish composition that stands out from the rest of the fusion dreck on this record. That's Alex Blake on the scorching bass and John Scofield on guitar. This is some of Cobham's best drumming on the record (he does his timpany - highhat duet thing in the beginning of the excerpt) and one of the few cuts in which the sidemen actually seem interested in what they are doing.

I didn't think this was all that bad. Not superb, but not terrible. Smooth jazz, also known as "jazz flavors," on the other hand, is satan's spawn. It's not jazz, it just tastes sort of like it. It's the nutra-sweet of the music world.

Well, the cut I picked was the only one I digitized and it was quite different from the rest of the record.

Ha ha, well poor old Cobham got his share here didn´t he.
And i´m sure you understand that i don´t agree when i tell you my site is called wasa express jazz-rock palace!
And Cobham is my all time drum hero. But that´s the beauty of music.It´s just opinions and you don´t have to think alike about anything. You can still be friends can´t you ! Great site!