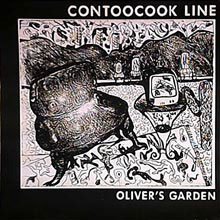 Attention Pavement fans! This would be more or less forgettable Richmond-Chapel Hill southern folk rock but for the drummer (listed here as Jonah West not Steve West) going on to play traps for one of the 90's biggest indie acts. Oh well, let's let his boss explain how this college band inspired Pavement to record two tongue-in-cheek songs about the biggest rock band at that time :

in the '80s steve was in an r.e.m.-inspired band called contocook [sic] line so i figured we should cover a [REM] song as a form of male musical social bonding. r.e.m. at that point were as popular as they would ever be - everybody hurts was the type of song your parents liked. so i guess i wanted to pledge allegiance at exactly the wrong time. anyway, we blitzed through camera, a song buried on side two of reckoning (it eventually came out on the cut your hair single). we had some extra studio time so i decided to do another song. this time, instead of the cover, we did a song about the band itself. the song, the unseen power of the picket fence, eventually made its way onto an aids benefit album called no alternative. the lyrics go all over the place (various observations about the band), but in the end i imagine r.e.m. as a unit in the confederate army during our civil war. general sherman is marching through georgia, burning down the mansions (except in savannah) and his last hurdle is r.e.m...

needless to say, i see r.e.m. standing tall in the face of the invader, even if the idea is absurd because the boys obviously would object to the slavery!!!! but as far as it goes they have proven me correct by being practically the most durable group on the face of the earth. album after album they are one of the hardest-working groups in showbiz. if any band deserve to be included in the webster's dictionary definition of "staunch" it is r.e.m....

Alas, those thinking that this is some sort of find will be disappointed. The music is the type that makes you forget the stereo is even on. Lots of acoustic rock type songs. I tried to listen to it several times and always seemed to wander off. Only one or two songs merit more than one listen, if that (but in the interest of fairness, I listened to the record a couple of times).

"Allen" suffers from some really collegiate lyrics ("Taking time with our li-i-ives") but I've never heard a more democratic mix - every instrument and the vocals is given exactly equal weight and it's built around a somewhat catchy bass riff and you can hear some of West's best drumming on the record here. It's certainly the most "R.E.M.-inspired" of the bunch. The album closing track, "Go To Hell" is a not very clever but has enough adolescent scorn to want me to keep it for special occasions. Other songs such as "Goliath" and "Sour Grapes" suggest an even more angry undercurrent but who really has the patience to care?

(How did this get in my collection? I have no friggin' idea. I'm pretty sure I didn't buy it and it probably came as a promo for my fanzine or the DC Period.)


Some bands I like to name check,
And one of them is REM,
Classic songs with a long history
Southern boys just like you and me.
R - E - M
Flashback to 1983,
Chronic Town was their first EP
Later on came Reckoning
Finster's art, and titles to match:
South Central Rain, Don't Go Back To Rockville,
Harbourcoat, Pretty Persuasion,
You were born to be a camera,
Time After Time was my least favourite song,
Time After Time was my least favourite song.
The singer, he had long hair
And the drummer he knew restrait.
And the bass man he had all the right moves
And the guitar player was no saint.
So lets go way back to the ancient times
When there were no 50 states,

There's no suspicious stuff on the site...yes, you'll get one popup per 24 hours, but that's it...the rest is just regular text and image ads!

OK - I got malwared once by a lyrics site (real bad) so I'm just leery - thanks for setting me straight.

Yeah...there are A LOT of lyrics sites that do bad stuff...but I hate them as much as you do! And you'd be surprised (or maybe you wouldn't) how often companies try to get me to run that crap...I don't want to do that to my visitors!

Leo, I struck out the lines above and will use your site as a future source. Thanks.

Awesome...thanks very much! And if for whatever reason you ever DO notice anything fishy on the site, let me know so I can track it down and get rid of it ASAP.

On a completely different subject... I love your blog, Jim. Your record collection reminds me a lot of mine. I'll even bet you have the same Nice Strong Arm and Phantom Tollbooth records I have. Anyway, I'd like to convert mine to mp3 format and don't know what software to use. Care to give any tips?

No, sorry but you can try and contact me and I can send them to ya.

Thank you! I would contact you gladly good sir. how do I do that? is your email adress written anywhere? thnx again!

vinyl dot mine at gmail

Hi, I'm Allen. The one on the record. All I wanna say is that this band had the best after-show parties, ever.

This album is better than anything Pavement ever put out. John Smith was one of the best unsigned singers that I've ever heard.

This album is better than anything Pavement has released. And those are the worst lyrics that I have ever read.

I liked Steve even though he was frequently grumpy. But that apartment was the gross. This is why I did not lose my second virginity there.

I didn't know the band personally but attended vcu 25 years ago when they were playing regularly. i was friends with a girl who knew the band and frequented their parties. she told me at one event in the bathroom there were q-tips on the toilet tank cover instructing girls to take pap samples. very odd i must say. but anyway, you missed the best song on the whole album. sister time. how in the F could you miss this gem? it is arguably the best cut on it. but just my own opinion. good to see i could actually hit them in google search...thanks to your blog! CD

I'm John Smith. Looking back, I think the recording, songwriting, lyrics, and performances were pretty lame. We did throw good parties, though, Michael Bowling's debutante party being the highlight. I don't remember pap smear episode, but it wouldn't surprise me. Dont bother listening to this record. Check out Joe Buck, Jrs stuff. ...quite good.

John, Billy here (boyfriend of Denise,stayed at Lisa's). Don't sell yourself short. You guys were one of the better bands playing in Richmond at the time. Burma Jam was great too. After show party's? Can't remember, that's good right? How bout shows in Kill Devil hills? Would love to hear from you John. Chris V. knows how to contact me

John, Billy here (boyfriend of Denise,stayed at Lisa's). Don't sell yourself short. You guys were one of the better bands playing in Richmond at the time. Burma Jam was great too. After show party's? Can't remember, that's good right? How bout shows in Kill Devil hills? Would love to hear from you John. Chris V. knows how to contact me

around 1990 peter buck came to the vcu campus...contoocook line was supposed to open up, but only the lead singer came with his guitar. tbh, the whole event was disappointing. the only redeeming factor was that after the show was over, one could claim 'i saw peter buck, up close and personal'. anybody remember that show? i can't even remember the name of the club. from what i recall it was next to grc (gladding) on pine street.

That never happened.They played at the Mosque, Rob and I dropped off a cassette. We were Stalingrad then. I don't know what ur talking about