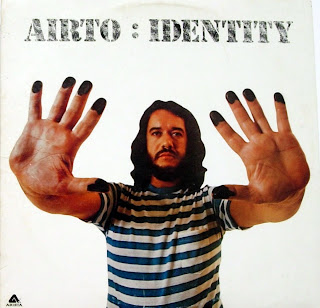 Hello? Airto? Anyone know him? If Downbeat magazine had a crossword puzzle, he'd probably be in every one given that he's won their drummer award and has so many vowels in his name. Met him while he was in Return to Forever, my LP initiation into jazz really, I was like 12 years old and got to see them somehow in Philly. Airto was was this drummer shaman, never seen anything like that shuffling around the stage with a massive percussive set of toys slamming things around. Things I never heard before and never heard again he had at his fingertips. He played with Miles Davis -- the Bitches Brews session no less, before my time, ah ha and I knew nothing about that shit just that he was jamming with this band that my Uncle had inadvertantly turned me onto (via a John McLaughlin album which made me seek out other stuff like it). Immigrated from Brazil, married or lived with and still does live with singer Flora Purim, another Miles/Chick Corea alum. He also played in Weather Report, a band I didn't like as much as RtF but just as seminal among most jazz fusion fans. Turns out he's not as weird as I imagined - his web site makes him out to be a pretty cool personable cat what with all his first person stories about his life.

Identity (1975) was to be, I guess, his breakout - produced by the then uber-crosserover hot Herbie Hancock (still sizzling from his smoking Chameleon album and later to be canonized with the biggest jazz crossover song in MTV history) -- Identity had lots of cross-overish poppy Latin jazz (what we would call "smooth jazz" in the '90s was often Latin-ish pop jazz in the '70s) . The album echoes in many ways both Hancock's recent work and the second incarnation of Return to Forever but is centered around Airto's effusive and celebratory drumming and percussion. A couple great guest stints from Raul DeSouza (trombone on "Flora on My Mind") and Herbie on his then familiar sounding Arp Odyssey synth.

The opener ("Wake Up Song") really makes a case for Brazilian Latin pop jazz that I didn't feel back in the day. I think that's Herbie cutting loose with an awesome synth solo and certainly that's Wayne Shorter doing his just a little schmaltzy thing on the sax near the end.

Airto uses three different bassists here and almost all of their work is uniformly good - it's just the liner notes don't give you enough information to provide credit where credit is due - the open bass work on "The Magician" is so fine that I almost forget about Airto's sappy and slightly off-key vocals and the lyrics ("let meee geeev you alll my luuuuuv") but he can sustain a note and someone (is it Gismonti) does the George Benson scat along with the guitar thing, only faster and better. Still, it's another fine sonic jam.

The lesser tracks "Mae Cambina" is very electric pianoish, ballad thing like what Hancock put into some of his albums (again with Airto vox) but has some of his cool bird calls so I don't dislike it too much. "Tales From Home" is Airto's biographical duet with Flora Purim that gets the funk on and Purim's vocals are worth the price of the tune even if it probably goes on a verse or two too long.

Two cuts stand out for me and they're the final cuts. The title track, written by Airto, short and sweet predicts Airto's work with Mickey Hart on Planet Earth, primal and tribal, it's the least pop thing on this album and so much more wonderfully messy than Mickey Hart's rather self-conscious efforts at ethnic music probably cuz its much more genuine. I can't place the African style guitar here and can't find anything in the liner notes as to what instrument it is but it fits really well with the layered vocals - the female chanting and screaming bores into the brain with repeated listens in a good good good way.

The final track, "Encounter", is co-written by Egberto Gismonti (who arranged everything here) and I think that's him on acoustic guitar and wood flute. Who knows who is playing the awesome bass line (they just don't make bass like this anymore do they?!). The singing here, also, cool Latin is well integrated into the rest of the jam and cuz its in a foreign language (at least for me) I don't hung up on any sappiness in the lyrics. You can hear Airto's awesome bird calls here and the drumming outro is sublime.

Some MP3s to try him out (recorded from vinyl):

The album was remastered a few years back and is still available as an import.

This album is not perfect, but many moments on it are. I would love to hear the remaster. The more rockish sections are a bit questionable, but the way these players go wild and smooth at the same time on the brazilian rhythms on both side openers is a dream. Everybody, trombones and synths and all, hits on astounding things. I had a chance to interview Egberto Gismonti. He's not fully happy with "Identity" because the LA exec producers made them put on extra vocals and stuff, "but Airto did that, so alright". You can hear some rough stylistic joints, it's probably why this masterpiece is so often overlooked.

The way the musicians interact, especially Gismonti, De Souza, Herbie Hancock and the bassists is amazing. I would say this is fusion at its best, but the vocals really mess up many of the tracks. It seem imposed by the record company somehow. Somebody should have said something in final edit. Such a shame, as the musicianship is astounding.