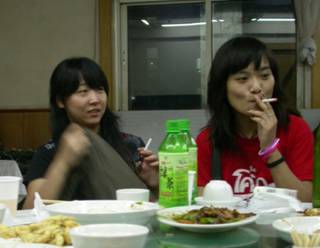 Coffee and Cigarettes is an irregular sMp3 web mix reflecting my mood usually brought upon by time of the day, season, shit that happened to me today and of course the legal uncontrolled substances that I am currently abusing. I have no control over whether these Mp3s will be available - typically MP3s included in this mix are found objects, usually discovered in a stream of conciousness trance-like state - RP refers to the "referring page" on which these tunes were found. Hey, it's better than watching TV. If you have a beef with these tunes being on the web, suggest you take it up with the owners of those pages...

Hey, thanks for introducing me to Hoist that rag, it's pretty amazing.