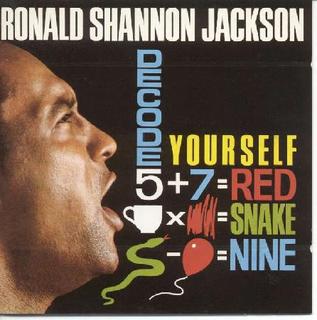 RSJ came to my attention as drummer for Last Exit. Turns out he, like Sharrock, had been around for many years and had an even more impressive resume than Sonny - playing with Ayler and "schooled" under Ornette Coleman, the father of "Harmolodic" jazz, a branch of melody/group improv that was in part the basis for much of the free jazz movement. Jackson was in Coleman's first electric group to explore his ideas. In the '80s, Jackson, living in NYC, put together The Decoding Society which incubated a group of youngsters that included Melvin Gibbs (later played with Defunkt and The Rollins Band) and, more famously, Vernon Reid, guitar god from Living Colour. It was only natural that Jackson would continue in the vein of the work he did with Coleman.

Much of the music he put out during this time was revered although this album is generally considered a low point. If Entertainment Weekly ever did an article on all his records, this would probably get a D-. What he was trying to do, however, was interesting and that was update Bebop and Free Jazz with a more techno, whatever-fusion sensibility (whereas Last Exit just thrashed the shit out of it). Hence, some of the experiments are either too much rock/techie ("Software Shuffle") or feature instrumentation that was even dated in '86 (Sonar drums went out with, like, Foreigner). Accordingly, the album starts out with a short but sweet cover of Dizzy Gillespie's "Bebop" as if announcing this is what has come before and now here's what's gonna come after (a lot of New York "loft" jazz at that time seem to be trying to make an Ultimate Statement about Jazz in the Here and Now). The cut immediately following, "Decoding" makes that point despite the hippy-dippy lyrics ("read all your dreams/key into the scene) that the Decoding Society Chorus sings are a bit lame but you can't deny the Jackson-Gibbs-Johnson (that's Rev Bruce Johnson on second bass) rolling beat, the horn/synth counter-melody and Vernon Reid's smoking guitar solo smack dab in the middle.

Bill Laswell is blamed for this record by some - for not letting Jackson's inner Harmolodics self shine with his more snaky and unrestrained melodies (which you hear in "Decoding" but seem restrained in the rest of the album). I'm usually not one to argue that the producer makes all that much difference (outside of MTV scrum-pop and disco) - I mean the ideal producer provides a second ear and should keep the engineer from interfering with the process - but given that a lot of the other Decoding Society output is pretty boss (especially live), I'm not gonna argue too much with the conclusion that Laswell had something to do with the failure of this record. 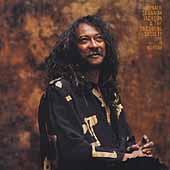 “The Decoding Society came together as a group during the winter months of 1979,” Jackson explains. “I met Melvin Gibbs through Bern Nix. Melvin brought his high school ‘like-minds’ running buddy Vernon Reid into the group. Vernon brought his friend Zane Massey. All three attended Boys High school in Brooklyn. Vernon also brought in the Rev. Bruce Johnson on fretless bass. Dr. Verna Gillis, ethnomusicologist at Long Island University, gave me the key to her loft club Soundscape. She needed someone living near Soundscape to allow for deliveries at any time. This gave me the all important rehearsal space I needed for playing drums and rehearsing the band.”

The Island period (starting with Man Dance and Barbecue Dog) represented the height of the group's visibility and popularity. Funk and blues gestures had become more overt than ever, contributing to a pastiche not found in the earlier work. Tempo and feel shifted rapidly from section to section. Hints of tonality, often in funk-based solo sections, could now be heard in contrast to polytonal and atonal sections. Unison sections at very fast tempos and Reid's fiery guitar work both exhibited the flashiness reminiscent of Seventies fusion, yet the signature rhythms, quirky melodies, and arranging/orchestration style assured the listener that this sound was still unmistakably Jackson's. Despite the return of the violin, the addition of the trombone, some interesting stylistic forays into country, bebop, and space funk, and the promise of a Bill Laswell production, the third Island release, Decode Yourself, is marred by a thin sound, gimmicky electronic drum and synthesizer timbres, and (surprisingly) a plodding, four-square rhythmic monotony.

That's some hot shit there. The full-band lock-step flights through labyrinthine melody remind me of Frank Zappa's late-'70s/early-'80s material, albeit with genuine swing.

Also, I don't know if I'm the only one guilty of this, but I can't help but laugh a little whenever I see Sonny Sharrock's name - not because I don't like his playing, mind you. I bite him more than I'd care to admit. But I just can't see his name without hearing his theme to "Space Ghost Coast To Coast" in my head. He's sonically typecast for me as the guy who scored a cartoon talk show.

Yeah, I think you said it better than I did - it does swing. I tried and tried and tried and with the exception of his humorous send-ups of metal and the PMRC, I could never get into Zappa. I did like the visual effect he gave off - I think I saw a live performance of Joe's Garage (on TV? PBS?) where he, still freaky by that day's standards, conducted his band like an orchestra, although in retrospect I regret turning to my parents and saying something like, "see like real music"... ugh, never justify your tastes to anyone except yourself...

Shannon's website has been updated.
The new address is ronaldshannonjackson.com.

I wouldn't have thought of this album as a failure, admittedly I picked up on it about 5 years after it was released, but it's always been one of my favourite Decoding Society releases, admittedly one of the most accessible, and it was Wire Magazine's album of the year for 1986.