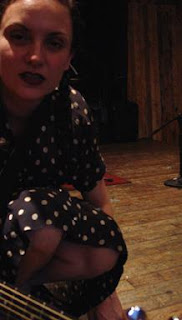 I'm way behind on the yearly daunting task of trying to listen to every MP3 up on the SXSW site... I think the festival is basically over by now but I've tried to ignore as much of the hype as I could so it didn't affect my listening parties.

Here's my first set... let me know what you like.

"Waste" - White Christian Romance. 10cc weren't really that bad of a band and this reminds me of some of their stuff - lush orchestral synths, cascading piano chords and vocals that provided whispered rhythmic counterpoint fitted in with a baritone guitar lead.

"Through A Keyhole" - Walter Meego. People might not like the nasal falsetto vocals here but it fits the whole paranoid mutant stalkerish vibe.

"Deen" - Wativ. Cutting edge jazz - don't get put off by the longish robot-analog reverb drum intro -- let it work for awhile --the aural payoff occurs when the strings made up to sound like wailing dogs kick in and the analog (moog?) synth starts cranking up.
Posted by Jim H at 1:30 PM

That track should actually be labeled simply Nina Nastasia, not Nina Nastasia & Jim White. SXSW flubbed that tracklisting for some reason.