Raw Power: After Your Brain LP 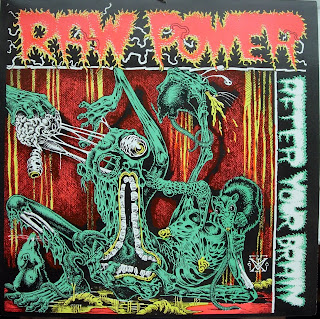 I was walking around town today and apropros of nothing, the tune "Somebody Done Somebody Wrong Song" popped into my head, so I spent my liquor shopping time singing it under my breath. Not sure why it did that as I don't remember hearing it today on the ubiquitous radio-soundtrack-of-our-lives nor I'm not aware of anyone doing somebody wrong or even doing me wrong, though there's plenty of stuff I could gripe about in the past.

Raw Power was an early, early hardcore band from Italy, one of the first. The earlier tapes and releases lived up to the "Raw" part of their name and there's nothing intrisically wrong with this release, just nothing much to push it above the rest of the many records released in this time period of this genre. More metalish than previous outings - their Screams from the Gutter is considered a superior record, I guess. There's a lot of head-nods to NWoBHM here and a little bit of acknowledgment of the post-hardcore scene even (your opinion may vary). Some of the first use I remember of the cringey Satanic scream-vocals that were so in vogue in 2004 Headbanger's Ball videos came from singer Silvio - but back then when he did it, it all seemed quite new and novel. Mauro replaced Silvio here I think on lead vocals. Another novelty of the time, they did that call and response thing that System of a Down have turned into an (annoying) science.

Drummer seems to be one of those guys that if he has an instrument he wants to play it - cowbell fills and the use of those still-cringe-inducing Bad Company electric drums (the ones that sound like high-pitched castrated dog woofs) but other than he keeps the beat and you can mosh to it.

My fave song of the bunch is "We Shall Overcome" - that is if you don't try to over-analyze the title or the lyrics ... Italians singing about "red Indians" - their words -- is like me singing about, I dunno, Mario Roatta's persecution of Slavs during World War II... instead give them props for pushing out against the more prevalent exhausting polkas and guitar grinders on this album.

Here's some highlights from the record - which you can buy on a CD combined with the previous album here:

"Buy and Pay"
"Is There Anything You Like"
"We Shall Overcome"

The band is still together although one of the founding members died a few years ago. I saw them live once and all the things people say about how albums can't capture a good live show are operative here.

They're heading out on tour on the West Coast this month - via Myspace:

Raw Power official website is not kept up to date - The RawPower myspace appears better tended... here's a summary page on Raw Power from the always useful KFTH
Posted by Jim H at 6:30 PM

None of your links work. They all point to something like http://projectmersh.com/03%20American%20Pastime.mp3

Weird - they are working for me...

They work for me. James, what browser are you using.

I don't think it is handling the spaces in the file names correctly.

Maybe you should try listening to SCREAMS FROM THE GUTTER...I saw these guys back in 84 with Decry,,,and they blew everything away at the time, except for maybe Die Kruezen...ya dig