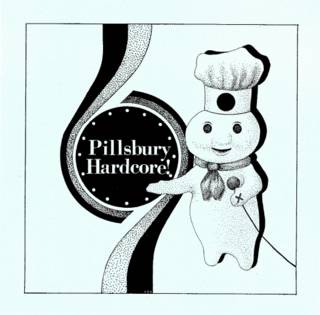 Here at Vinyl Mine, one of those "dime a dozen" Mp3 blogs, we force our readers to take the good with the bad - the mediocre with the heavenly - the dogshit with the creme brulee. I'm sorry to say that this is the former and not the latter. Hey, how else do you follow up Hasil Adkins?

I am by no means a hardcore hater (in fact stay tuned for a great HC 7" in a few days) but this is one of those bands that after 15 seconds, you're praying for another earthquake to hit their hometown (PoMoNah) - go ahead, listen for yourself. And what was it about SoCal Straight Edge? They got the whole basic edge thing down (no drugs, no drink, no sex) but turned it into some sort of homoerotic youth gang, what with the "x"es on their hands, the shirtless boys-only dancing, the sharp haircuts, the whole going to see some other boy's band, the anti-fashion-as-fashion thing.

Here's a horribly produced record full of a unintentionally laughable set of barely legible songs with such riveting and original topics of "pot is lame" and "7-11 is cool" (to paraphrase South Park, "Rollins Did It") and hippies suck ("Eddie Flowers Did It") and record collectors are assholes ("Tom Pig Did It"). I mean if you have to put "straight edge" in the title and you're a straight edge band to boot... isn't it like... game over, dude.

But what's even more funny and ironic is that members of this band went on to form the most pretentious self-hating band ever, Man Is The Bastard, who are known for -- sit down -- coming up with the concept of a "power violence" genre. Wow. There's a little bit of Spinal Tap in all of us, eh? Some more than others.

NOTES:
The lyrics for the above selection: 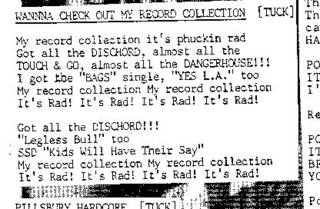 As I mentioned, the Pillsbury boys are now in Man Is The Bastard. They released a CD with Mumia the Cop Widowmaker, Jello Biafra and some Earthfirst!er, the entirety can be downloaded at here. Listen to the track entitled "Alignment" and tell me I'm not wrong about them being the most pretentious self-hating band ever. Here's an interview with them - ditto.

Some things are better left in the old shoe box. I think 75% of my collection falls into that category. Of course, I too would have been taken in by the doughboy.

True but in my fevered rationale for this stupid website, I said I was going to write about everything, even if in passing, about what goes under the "digitize or not" scrutiny... as agony shorthand calls is, a jukebox jury of sorts.

Jim... it is that rationale which makes your blog so enjoyable. The good and the bad - every piece of crap we ever spent money on - out there in the spotlight.

Plus, the writeups are just that much more entertaining when it's about a piece of crap.

I seem to remember this Pillsbury Hardcore ep being released as a joke record...

Yeah, well if that is the case, then to continue with my "Simpsons Did It" theme - "Meatmen Did it!"

It wasn't a one-off, though, like most joke projects (unless you are like the Meatmen who moved onto other things to parody) - I believe they released a few tapes and then did a compilation CD.


write this man & tell him we didn't come up with the concept of power violence matt of infest did.tell him he is a king & should be reguarded as having an extremely valid and important opinion.we hate ourselves a bit more in the bright light of his insight.


if you could do this for me it would help.

Guess you missed the joke.

From an ex-member of the band, I find the comments in total to be more funny than the release was intended to be. You would have had to be there (1983-1988) to enjoy this to the fullest. So sorry you didn't like it, perhaps if you smoke some pot, then play it you will find it enjoyable. BTW, Man is the Bastard contains but 2 of the 5 present on this release. Members of PHC went on to participate in many bands, all of which are unique in nature, such as Shoeface, End to End, Process, Charred Remains, Cyclops, Pissed Happy Children and on and on.

I was there. I have the album, and even the T-Shirt to prove it! Yes, it was funny, but they kicked ass unlike a lot of Pomona bands at the time. But as Shawn says, the comments here are funnier. Oh, and Shoeface was pretty damn good too. That was all Bob!

Funny how you mention that we ripped off Rollins on the 7-11 thing. That song was written way before he ever talked about 7-11.
Many of your so called "facts" are nothing more than false, opinionated, half truths. You don't have to like the record, but at least get your facts straight before you try to slag people.

I'm sure you're befuddled by Crucial Youth and Stikky as well. After all, any band that used the Pillsbury doughboy as a logo must have wanted to be taken completely seriously.

mRealize that the mystery guy wearing the Angry Samoans t-shirt on the inner sleve of Nirvana's "Bleach" album, taken by Charles Peterson and featuring Kurdt Cobain sprawled all over Jason Everman's drum kit, is none other than Bob Durkee of Pillsbury Hardcore. Yeah, these guys did rock back in their heyday.

PHC, for all its faults on vinyl, kicked ass in person. It was all about the experience and having the vinyl let you live it over and over. Wish I had more vinyl from Rubioux bands: SDI, TDF, Twisted...

Your ears are retarded.

I have this. On yellowish-orange vynil. And I had the tape. Oh my God I had a PHC t=shirt, a red one. I wish I still had that.

"Hey Bob What's Up" - that was a freaking anthem. woooo!

hey anyoone own this record and wanna sell it?? if so email on custkings@yahoo.com

Man Is The Bastard rules. You must snuggle chode frequently to not appreciate their talent and influence. Poseur.

The thread that keeps on giving. I love this thread.

I absolutely loved this record. The guys in this band were cool too. The P/V/H/C scene was fun and brings back lots of good memories. Now if I could only find this record somewhere still.