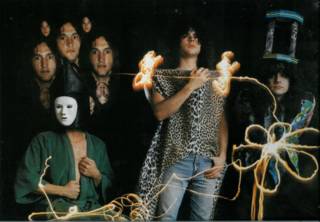 This is an album that doesn't work too well in the cold sober sunlight of the day but turns into a totally different beast once the moon comes up and the party materials come out (and no, the Vinyl Mine only tolerates legal party materials- like those conical party hats and noisemakers).

The Bags were a mid-80s / early-90s Boston 3-piece that mostly played music as if stuck in a pre-Sex Pistols rock'n'roll timewarp. At times, they were sort of an MC-5/Stooges version of Spinal Tap (not to say that both bands didn't have their Spinal Tap moments). Foghat and Kiss also spring to mind when listening to some of their songs. At other times, pretty thoughtful and original and even somewhat eclectic (one of the cuts, "Superpower" would have been right at home on a Boston hardcore compilation). I once saw them play in DC and they were the type of band where both the bassist and guitarist wore their guitars down at crotch level and had the same type of hair as Slash that they shook around as they played. They almost looked like a Peter Bagge (forgive the coincidence of their names) comic strip if it wasn't for the non-heroin chic babyfat and acne (well, maybe the acne).

Side 1 is what I would call The Stupid Side. With songs like "Atomic Coconuts" (because electronic coconuts just don't cut it) and "The Beauty of the Bud" (a tribute to the devil weed), you can't help but getting good and stupid. This is a great side for preparing to go out. And it's just not for single hipsters. The Ohio Playersish "Atomic Coconuts" is stupid enough for the kids, too and I dare you not to dance to it.

The second side is perhaps more thoughtful. The afore-mentioned "Superpower", their take on foreign policy that makes as much sense as, say, Noam Chomsky or Bill Kristol (which is to say, it makes no sense) and the almost wistful "Closer Then," a nostalgic recollection of an old friendship that might bring a tear to yer bloodshot eyes. This is the side you put on when you get back home. While the only "chilling out" I do is when I sleep, this does kind of set the stage for it.

"The Beauty of The Bud"
"Atomic Coconuts"
"Closer Then" 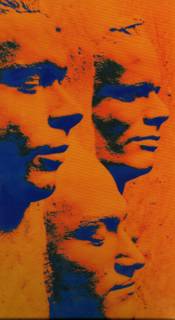 Links/Factoids:
The fine print: All MP3 tracks are provided to stimulate discussion and further research and education into the arcane world of (mostly) independent music. Mp3 files are removed after roughly two weeks or at the request of the artist/copyright holder.

Found a new favourite band. Thanks, How come that Mono Man is hardly mentioned in The Boston Rock and Roll Museum's site. He is the most famous Boston rocker in my part of the world.

i was going to post the bags one day but I got swamped with other releases. maybe I'll be able to beat you to the punch with human sexual response or the zulus or tribe or birdsongs of the mezozic. vinyl for me is a larger time committment so I always put it off

anyway thanks for the bags

Craig, except for Birdsongs, I don't think I have any of those other bands. But if you've got some good Bags or stories to share about them, don't let me posting it stop you - its certainly not my intention. The more the merrier. I agree though that vinyl is time-consuming. In a way, I keep on hoping for lousy weather, so I can get some of the work done. of course, I seem to find excuses even then (thank you Netflix).

Fire, I don't know why the Boston online music museum doesn't have much on Monoman except that it appears to be a work in progress and I'm sure they wouldn't turn down a good submission from somebody. They also don't have much on the Lyres or Mission of Burma, who I would also think are seminal Boston bands.

I literally stumbled on this site today, and YES! The Bags. I was in Boston from 1982-1991 and was a very huge Bags fan. I actually road managed them on a tour. I always described them as the pre-curser to the Seattle grunge scene, they were the ultimate heavy power trio.. Thanks for giving them their due, I am still looking for their Restless release that came out before this one I think in like 86 or 87, called Rock Starve.

2 things:
boozy memories of the Bags on Joe Harvard's website

I haven't heard it, but they have a new album, doncha know.
www.thebags.org

Miss the BAGS! They haven't played in a couple of years after doing some shows about once a year in Boston

They had about four other Album releases including one titled Swap Oaf; I liked them all but I agree the 1st one was the best!

This is one of the best f#%king albums of the past 25 years. Plus, I hit it right on the time stamp. Chuckle. -c/o www.facebook.com/britneylandusa