In my mind, the iPod shuffle (the feature, not the new device) and the digital editor are perfect for an artist like Eugene Chadbourne. First, I can only take him in low doses. His cartoon voice and often irreverent-when-he doesn't-have-to-be 'tude make it hard to take in extended doeses. So when he pops up in the shuffle its welcome because I still kind of like Eugene and his demented approach to music. He's also like a novel writer in serious need of an editor. His exuberance over some found sound can be likened to the happiness one can get from drinking a bottle of wine only to discover the next morning that the hangover isn't worth it. Being able to go in with Goldwave or Sound Editor and remove those parts of his tracks that annoy is a godsend.

Most known for his eclectic ability, throwing in a classical influence there, a modern jazz riff over there and then some country music and his stark leftist politics, Chadbourne has an impressive body of work and has a loyal following throughout the globe. Although, as someone from the Red Clay Ramblers said, "I'm not sure I understand all he does but he is really talented and certainly entertaining." From his early solo work, and then onto his gonzo rockabilly band, Shockabilly, to his mid-80's revival among the underground (including collaborations with Camper Van Beethoven) and on through the many years where he's been called to lecture at colleges, been invited to prestigious jazz festivals and still proudly maintains his "red diaper doper baby" outlook. His work, though, requires a curator - someone to pluck and choose the best - alas, that used to be college radio but these days, Chadbourne perhaps deserves his very own music blogger to specialize in his work. The number of tapes that he released alone probably numbers in the hundreds and his "formal" work (CDs, LPs) is probably up in the dozens if you count his collaborations. He is information overload writ large.

1986's Country Protest LP brought together The Red Clay Ramblers (a very famous group in bluegrass circles), Lenny Kaye (from the Patti Smith Band! playing pedal steel guitar!), Rik Rue (an Australian noise collage-ist) and Chadbourne's Fart Ensemble (yuck) who all no doubt crowded into Chadbourne's home studio and ate his wife's cooking. It's heavily weighted towards traditional country music but with a seriously bent perspective and LOTS of tape manipulations, found sound and noise, noise, noise. Much of this now sounds kind of dated but at the time it was a welcome relief from the hard rock of the day (if it didn't have feedback, it didn't get booked) and of course the pap that was being played on radio and in the mainstream. Chadbourne put out a few albums in this vein - the followe-up was Corpses of a Foreign War and featured a Phil Ochs medley and guests from the Violent Femmes and, as usual, lots of noisey mayhem. In the underground of that time, Chadbourne was one of the few "folkies" (although that's really not an accurate description) who didn't get either ignored or booed off the stage - probably because he never went with a common formula (and he had street-cred from Shockabilly).

On Country Protest, the opening piece is reportedly done entirely in one take with the Red Clay Ramblers (and Lenny Kaye) and is a tour de force through a number of songs including: "Always on My Mind", "Whiter Shade of Pale", Black Flag's "TV Party", "To Sir With Love"(!) and finally the signature song of a band I'm sure Chadbourne and Shockabilly felt a certain kinship with, The Butthole Surfers, which I have excerpted here. The Rambler's playing is quite good considering they have never heard of the band or song before (although Rick Good was reportedly a rock fan and helped the rest over the whole conceptual hump).

"The Wild Angels" is also excerpted and is my favorite cut from the album - a sort of tribute to bad biker movies and loud rebels. For the most part, its a great collaboration with Rik Rue but suffers from too much poorly recorded Peter Fonda biker movie dialogue in the beginning and end, so in the proud new tradition of digital deconstruction, I've done my own snipping - let's hope the original artist doesn't object too much.

I couldn't really bring myself to rip anything else even though I gave it a few spins. Songs such as "Perverts on Northridge" and "Choppin' Down the Weeds" as well as Buffy St. Marie's "Universal Soldier" suffer mostly from Chadbourne's voice and trite hippy-punk song topics (suburbs aren't cool, weed is cool, war sucks). Although Merle Haggard isn't the most politically correct person in the world, I found it a bit insulting the way Chadbourne looks down his nose at the man in his interpretation of the "Fightin' Side of Me." Maybe he doesn't mean it but that's the way it comes across. If you remember back then, there wasn't alot of reverence among the left for much of the country music although Haggard and his ilk always stood a bit apart from the rest of the flag-waving, god-fearing Country Music milieu. So, I'd have to admit that given the choice between seeing Haggard live over Chadbourne, I'd have to go with the former. 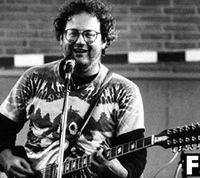 That said, I did see Chadbourne play live once around 1988 (Hung Jury Pub, Washington DC) and it was entertaining as the Red Clay Ramblers state although I was a bit lost as to why he put the birdcage on his head (no he doesn't drink) - I guess it was a gimmick. I also found his guitar playing a bit over-rated - and you can hear that when he goes up against the Ramblers in some of the other songs in the Medley. That night, I got to sit down and do an interview with him that I hope to find someday. We talked about politics and his music but it wasn't one of those interviews where you connect. Maybe it was the age difference. He seemed distracted and I suppose I was a bit of a pest as I hadn't arranged it long in advance. Still, he was a nice and gracious when I gave him a tape of my own music (I'm sure it ended up in the recycle bin the next day).

Sample Country Protest:
"The Shah Sleeps in Lee Harvey's Grave" Clipped from "Medley in C" with the Red Clay Ramblers
"The Wild Angels" (excerpt) with (I believe) Rik Rue

I always recommend "... Just Beautiful..." to people interested in Chadborne but unfamiliar. It's not a rockabilly band as you suggest. It takes the best of his and Kramer's sense of collage and mayhem, but never drifts too far into their respective navels. Other Shockabilly, like Chadborne records in general, can be pretty hit-or-miss from tack to track, but that one is solid all the way through in my opinion.

I'd also highly recommend Ayler Undead for those more interested in the free jazz side of his work. It's incredible and has very little of the noisy filler.