Not really punk, not really metal, perhaps the closest touchpoints is a less blues-heavy update of Alvin Lee's Ten Years After merged with the minor chord devil boogie of Blue Oyster Cult. This was their swansong LP, the long-awaited record that was recorded through the latter part of 1987 and released after they had broken up. Its a good, though not great, record and probably would have worked better as an EP. I always thought Green River had some of the greatest song beginnings - as in fact almost all of these songs do - they just didn't always deliver the song. I would have consigned "Rehab Doll", "Together We'll Never", "Smiling and Dyin" and even "One More Stitch" to the eventual CD w/unreleased tracks and called this release the Swallow My Pride EP (after the best song on the record). It would have stood proudly with Dry as a Bone as a fine example of pre-grunge Seattle misericore.

There aren't that many reviews on the Interweb that I could find but one was All Music Guide (AMG)'s site in which they complained about the recording. I don't understand All Music Guide's problems with the sound. Departing from their previous, ah, production values to Bruce Calder's sonic embrace was in retrospect a good idea. I found the sound to be one of the great things about the record, in fact. Maybe the CD version was remastered poorly, I dunno, but the LP version is fine.

AMG also complains that Mark Arm's vocals sound "like he's singing from across the room." Um, that's the idea of reverb vocals, dooshbags and I think it was very intentional - Arm's vocals, in this manner, work but (there's always a but) I think Arm "sells" his pain and misery a bit too much and it sounds a bit contrived, almost amateurish, at times. That's only made more painfully obvious when he moans in full room reverb. As for the other players: Gossard, Ament and Fairweather do a great job - for a pretty youngish band, they inherently understand each other's limitations and complement into a coherent whole - yielding some mighty decent riffage. They also contribute (via Calder's engineering) some pretty wild background vox which you notice after several listens.

The lyrics and the whole gist of this LP is pretty miserable - not bad miserable but truly utterly despairing miserable. Their subject matter being stuff like girlfriend with AIDS, mutual suicide pacts, self-destruction, you get the idea. Some of it is pulled off with aplomb but unlike Kurt Cobains' obtuse but deeply felt puh-ain, I'm not so sure that Mark Arm really has this badness in his life -- it just doesn't always ring true - ok, I'll say it: poser, dude, yer a poser.

And while there are some very worthy poetic passages in the songs, there are also some lines that sound like they were ripped out of his 8th Grade notebook (you know right next to the pix of pentagrams and big boobs) - I mean "the river in the city gets pumped with sewage/the river in the city runs brown" and "my love she's a party in Hell... only you make the gray sky black" (from "Rehab Doll" and "Smiling & Dyin'", respectively). I think what's missing is a sense of humor -- maybe he just didn't like his bandmates and the direction they wanted to go with the band (his pal Steve Turner having already left the group to "go to school") Whatever the tension that was in this band is reflected in these songs, I think. Mark Arm is not a depressed or depressing guy if Mudhoney and his other projects are evidence. And early Green River had its happy happy moments - the first EP was rollicking party longhair music for serial killers and demongirls. I say this because "Swallow My Pride," which is included here (and was on Come on Down EP), was one of the first songs they wrote. If you listen and read the lyrics, its a hilarious song about falling for a Reaganite chick and going through all sorts of 20-something liberal angst over it and then concluding that, well, "I wouldn't mind / if you swallowed my pride / make me feel alright." It ends with a seemingly spontaneous prolonged sendup of BOC's "This Ain't The Summer of Love" which I don't remember being on the demo version or Come on Down (confirmed!). Although the Summer of Love thing is done somewhat in jest, its probably indicative of my notion that Rehab Doll couldn't even take a funny (albeit self-hating) song without adding some downer elements into it.

There's also "Porkfist" which sounds pretty much influenced by Big Black about the guy who swings the big hammer in the slaughterpen and the alpha-pig that's about to go up against him. hmmm... sounds like every rocker promising that if they sell out, they'll somehow survive the carnage. Instead, I'm thinking that the alpha-pig got a boot to the head and a big hammer to the skull. Incidentally, I can imagine it was a song like this that inspired Chuck Eddy to (derisively) come up with the term Pigfuck for describing this genre (Killdozer being the kings of Pigfuck) and while Green River is constantly being touted as the progentors of grunge (I'm not totally sold on that but I will take Mudhoney for $1000, Alex), maybe they and Albini are really the fathers of Pigfuck, eh? (note: GR toured with Big Black in '85).

Finally, I like "Forever Means", the opening cut, even if it is the most overtly metal song here. It just has a riff that doesn't quit and its so good I'm willing to forgive Mark Arm's vocal excesses here and there. Even the downer lyrics are kinda okay since they are a pretty punk snarl about how "their" world (y'know, the squares) has nothing for the singer: "what you get is what you see/lookout, i don't aim to please")

The fact that Gossard and Ament went onto one of the biggest groups in the '90s (Pearl Jam if you didn't already know) has probably kept this record in print. You can buy it in multiple outlets along with the predecessor EP. Check froogle for best prices.

Songs:
When the sad day comes that I hit my 20 Gigs on my iPod, and that day will surely come, some of this Green Riverage will have to go. But these are the three songs that will remain:

"Forever Means" (metal, yes, but truly sonic - dig the background vox)
"Swallow my Pride" (with "sonic moans" by Kim Gordon)
"Porkfist" (a Pigfuck song if there ever was one)

Fine print: All recordings come off of vinyl that I own that is recorded off a cheap turntable. They are offered for research and historical purposes only and are removed within two weeks of the date of this posting. If the copyright holder, blah blah blah... etc. ad nauseum.

Despite all the hype around the band, there's relatively few fansites of note. Most of the better documentation on the band comes from Mudhoney fans. For some reason Pearl Jam fans take little note of the Green River years.


And then...and then, went up to get paid afterwards...after, you know, after probably the most humbling experience ever, and, Corey Rusk, who, he was in The Necros at that point, I was really excited to meet him, 'cause I loved The Necros, and runs Touch and Go now. He was the promoter for the show, we were supposed to make like a hundred bucks, which was a huge payday for us at that point. He's paying Danzig like $12,000, or whatever he was making that show. And I put my hand out, and he goes 'Man, I thought you guys sucked, I'm only giving you 25.' I just put my head down, and I'm like, I gotta to back and tell the band that we only made 25 bucks."

Well, we were trying to be Ten Minute Warning and Tales of Terror and Iggy Pop. Some combination of that and probably, in somebody's mind, SSD Control, and something else...but ah... Yeah, there were a lot of bands around at that time, the U Men and bands that were totally, in our minds, "the rock stars." We just went out there and we had some bad heavy metal riffs and we liked punk rock too, so we put them together and that's kind of what we came up with. 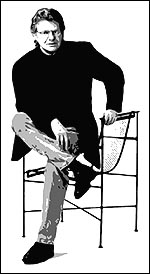 Green River broke up, reportedly, over the notion of "selling out" - Gossard and Ament wanted to make a good living playing music and put together Pearl Jam with Eddie Vedder. Mark Arm wanted to stay true to the punk ideals and along with former Green Riverite Steve Turner went off to form Mudhoney. They've released about 8 original albums - the most recent being 2002's "since we became tranluscent." Earlier this year, Arm replaced Evan Dando to complete the MC5 reunion tour to great acclaim. Meanwhile, Stone Gossard has released a solo LP, to little acclaim and reviews that will always compare his work in the context of Pearl Jam. Jeff Ament is apparently spending his time doing endorsement deals. And Pearl Jam haven't released a notable record since 1993. Pearl Jam itself went into seclusion after their massive popularity pretty much made every personal thing they did the subject of media gossip and paparazzi snapshots. To some, the old adage, "be careful what you ask for, you just might get it" rings true.

Mother Love Bone and Temple of the Dog, yep.

Spot-on write-up, and thanks for the mp3s...I've been looking for this vinyl for years, haven't heard it in so long. All I can find is Come On Down...