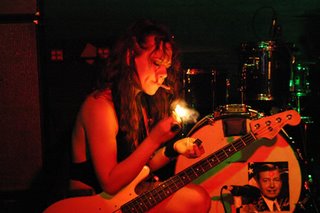 Caption: The Sundresses Light One Up for John Ashcroft
Argggghhhh... if "S" stands for "Saturation," then "T" stands for "Thirsty" well, that today's paradox. So much crap to drown in and then so little fine wine to drink of ...

I remember last year around this time, asking why I decided to take this on when I could be spinning some old vinyl.... or new (I just got a dumptruck load of 7" records recently).

But we're coming into the homestretch... one final post after this.

Sailboats Are White - "Veto" - Dischordant and disorienting is exactly what I think they were going for - one of the lyrics you pull out of the knife tornado that is this song is "who am I?"... indeed...

Sam Baker - "Waves" - A real tear-jerker this. Baker, who nearly died in a Peruvian terrorist attack, came back to life and started scribbling songs. This sounds like Dylan in his C&W phase, if that means anything to you.

Sarah Hepburn - "Hey...OK" - Has that Breeders cool feel but with a slick sound and a standout guitar riff. Music for wearing sunglasses to and then retching over the side of your convertible in middle of the summer.

Sean Smith - "bittersweet tobacco farewell" - The touchstones are clearly Fahey and acoustic Kakouen (sans vocals, thank you). A steel guitar instrumental for all the guitar fans.

Spinto Band - "Oh Mandy" - I know I'll hate myself in the morning for loving this sugary indie pop golem - the vocals whine, the band is overly cloying but I can't help but wishing I had a life that this was the soundtrack to. Or maybe I'm wishing that this is the soundtrack to the life of someone I wanna beat up. I'll stand by to take the slings and arrows now. I'm am St. Stephen Spinto.

SSM - "Exit Strategy" - In the year 3006, they will probably still be playing garage punk rock in Detroit and it will still be sounding fresh and great.

The Sundresses - "The Love Song" - Slide guitars and Delta blues-hop is usually not what you would associate with political lyrics (think minutemen crossed with Doors) but rock comes in endless combinations - celebrate diversity, maaaaan.

Tapes 'n Tapes - "Cowbell" - So, last year I jumped on the CYHSY bandwagon for about 15 minutes - then I heard the rest of the album. This year's model is Tapes who Pitchfork recently smeared wet lipsticky kisses all over. This is sort of a rock version of one of those Russian dances where you cross your arms and get your ass way down low and shoot your feet out from below - I hear buzz guitar, flute, hand claps, non-annoying singer and I'm sorry to report no cowbell.

Tarantula A.D. - "Who Took Berlin (part i)" - I was reading an article recently where Radiohead was claiming that the reason they hadn't signed onto iTunes was because offering individual song for download would degrade and besmirch the integrity of The Album. I can't speak for Radiohead (nor do I want the dry cleaning bill I'll amass if I try to) but taking a cut from this, one of my favorite albums from last year, seems unfair since it's so all over the place (doom metal, gloom folk, orchestral rock, prog, etc.) and deserves a close listening in its entirety (unlike, say, Hail to the Thief, which deserves nary a listen). But if any one cut can stand alone it's this one, a classical rock variation on what sounds like wistful midevil army campfire song - the song you sing after you've lost the battle. 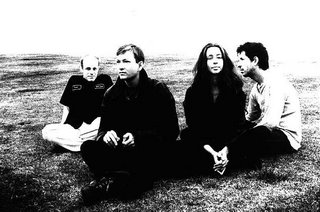 Th' Faith Healers - "This Time" - Another 90's band reunites for a lap around the states and Europe - promoting their recent Peel Sessions CD (they played for BBC five times). If you missed these guys first time around, as I did, this song reminds me of The Breeders trying to write a Dinosaur Jr tribute song.

Times New Viking - "We Got Rocket" - If any band last year set out to destroy capital R Rock - which is generally in the doldrums - and start rebuilding it shorn of all the current bullshit that it is mired in, it was Times New Viking with their incredible debut album (on Siltbreeze). Looking forward to find out where they go next.

Tom Brosseau - "West of Town" - One of those pretty folk pop songs that makes time stand still and makes you stare into space as the songwriter paints his picture for you.

The Trashies - "Bad Check" - Some scum rock from Seattle preaching good advice for all those Austin visitors ("spent all your money on booze and weed? / write a bad check, write a bad check") that I'm sure the locals will appreciate.

Tunng - "Tale From Black" - Mike Lindsay, who's been a one man folk and electronic collective, puts together the band for a short Texas tour - in Austin, they're playing with Man Man and n0 Things on Thursday and that sounds like much better thing than I'm gonna be doing on Thursday. 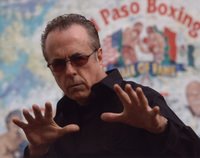 Tom Russell (pictured right) - "Grapevine" - This goes out to Bubba who I'm sure is still "writing movies in his head at night." Glen Campbell but with only a smidgen of country schmaltz.

The Twilight Singers - "Teenage Wristband" - Not a perfect song in my view (the vocals are a bit overcooked) but all honorifics to Greg Dulli, ex-Afghan Whigs are due. Except with something like two albums out since this came out (in 2003), why not pull out something from the newer recordings, Greg?

Saved Rounds: Just wanted to note that Savage Republic, a sort of B-list art punk band that was on the outskirts of the L.A. 1st/2nd wave SST teenage riot will be reuniting here on Friday. Also, if you want a laugh, Foo Fighters drummer will be "showcasing" his songwriting project. If you failed to pick up Sia's "Breathe" - the closing song from Six Feet Under - when it was making all the rounds of the Cool Kids Blogs, here's your chance to score a legal copy. Oh look, The Secret Machines are still shilling the same old song.
Posted by Jim H at 8:20 PM

I just wanted to thank you for posting these SXSW songs this year and last. Thanks to you I've heard some really cool stuff that I wouldn't have come across. It's good to know that there's still bands of many types that are just plain good.

i've loved "oh mandy" for a while now, such a great great song.

I just found out that they (Spinto band) are touring with Arctic Monkeys. Pretty "hip" for a band that lays tribute to Manilow.