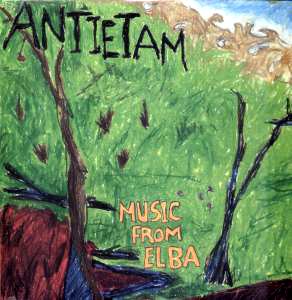 In a sense, Music from Elba (Homestead HMS-068) is supposed to be a progression from Antietam's self-titled debut album, released just the year before. It also seems to be a commentary on their status in Louisville - Elba was the place of exile for Napoleon and there's more of a concerted effort to explore their mid-Western / Southern roots of the Kentucky border state. The album seems to be answering the question - just what does an art-punk band from Lousiville Kentucky sound like? That they can't settle on an answer is what makes the album compelling in spite of its faults.

So obviously, there's more roots showing here - nods are made towards country, folk and even square dance music. There's also still the ample love for San Francisco acid rock and Beach Boys pop that was in the debut album but we also hear obvious tributes to Antietam's contemporaries - X, minutemen, Meat Puppets, Feelies. If Elba was a perfume it would be a mixture of leather, patchoulli oil and freshly cut hay. One also hears echoes of the band's precursor's - Babylon Dance Band (Key and Harris's art punk outfit) and Your Food (Wolf Knapp's roots hardcore band). As a result, the band tries to go both for the head (art punk) and the gut (roots hardcore) and that sometimes causes what critics would call "stylistic problems" a nd what I would call songs that fall flat on their faces.

There's also a jittery, overly caffenated feel in some of the songs that wasn't present in the sort of relaxed first album. The sound isn't great either but it was the rare independent record that lucked into a good production. On vinyl, it doesn't have the "tinniness' that some have claimed but there are problems with the mix - especially in songs where the lyrics are lost in the frantic guitar and bass playing. As was the case with a lot of these 80's indie albums, the drums are often amateurishly mic'ed and then given too much prominence in the mix. But even with that, the best recordings of that era can compensate for those problems by the quality of songs and enthusiasm, spirit and tone of the playing. That's not the case with some of the songs here, though, and I wouldn't recommend this as their best effort.

The most interesting compositions are either written or co-written by bassist Wolf Knapp - who left the band when they moved to New York City - he also takes the most chances which is good in and of itself but when the band can't keep up, the songs accordingly suffer. "M.V. Augusta" appears to be about a man riding his motorcycle around town - it shifts between a minutemen-style narrative of a bike ride and instrumentals embellished by Danna (Fetchin' Bones) Pentes' violin breaks -- including a square dance, a Meat Puppets meet Scarlet Rivera style lament -- the shifts, though, are abrupt and the drummer seems lost at times. Another composition "The Haunting of Rocky Face Ridge" (which closes the album) is written by the entire band but has Knapp's hand all over it. It also boasts a complex song structure (three movements and coda), vocal trade-offs and instrumental breaks and aspires to be something special but it just isn't a stand-out and suffers from some real amateur hour playing all around.

Knapp's other songs, though, are my favorites of the album even if they are obvious tributes to some of the more prominent roots-punk bands of the time -- there's X ("Until Now", co-written with Harris) and The Meat Puppets ("Concord") peaking out from behind the curtain in the best of them. The other obvious tribute is Knapp's "War Is (The Health of the State)" which sounds like a mash-up of The Knitters with d. boon's minutemen but just not as intense (and that scary crash and smash sound the minutemen had in the studio).

At any rate, I wonder if the band had spent more time rehearsing and improving these songs, whether this might have been more of a stand-out. Instead, it's a warm-up for things to come and also begs the question of "what might have been" had Knapp continued with the band. 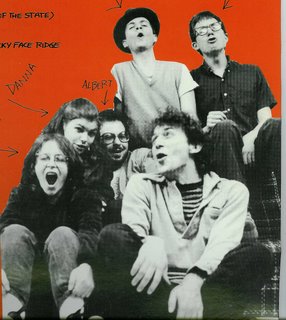 "Fontaine Ferry" - apparently named after a controversial amusement park in Kentucky that was closed in 1969 after youth riots, this instrumental provides a chance to hear the band's sound unencumbered by vocals. Written by Tim Harris.

"Concord" - Meat Puppets taking a ride on a Jefferson Airplane.

This album is out of print but can be found on E-Bay or used record stores.

What others have said:

"But it's passion, not complexity, that makes Antietam's music so impressive. The clinical precision of old-fashioned progressive-rock bands (who often played simpler music) isn't for Antietam; band members pick and strum and sing as if caught in a whirlwind. The lyrics on Antietam's new album, ''Music From Elba,'' are about surviving while structures collapse; the music builds new structures from fragments and clings to them with desperate urgency." - live review by Jon Pareles, New York Times, 1986

"The two mid-80's releases are marred by an over-abundance of restraint: just when Key and her bass playing significant other Tim Harris start to approach lift-off, they think better of it and remain content to chuf on terra firma. There's nothing really wrong with the discs - save the sub-standard harmonizing that makes X sounds like the New Christy Minstrels - but the songs are a bit too inconspicious, too gentle to really grab the listener by the lapels." (David Sprague)

A school was being born in Kentucky that would be influential throughout the 1990s. Its early leaders were bands at the crossroads between roots-rock and noise-rock, and Tara Key's Antietam were the most typical in bridging those two styles, i.e. the South and Sonic Youth, the rural and the urban sound, tradition and modernism.

Although the R.E.M. comparison no longer holds up, there's a moody, near-psychedelic feel to this quietly intense album that shows a definite similarity between Antietam and the mid-'80s Hoboken bands such as the Feelies and the Individuals. (Stewart Mason)

Circular free association fun: Antietam the band was formed in Louisville on Derby Day, 1984. A horse named Swale won the Derby that day. A swale is a "depression in the earth." Antietam was named after a Civil War Battle that occurred on September 17, 1892. The "Bloody Lane" is an 800-yard "sunken road" - or a "depression in the earth" is one of the more notorious sections of the Antietam battlefield. Music from Elba includes an anti-war song "War is (the health of the state)" Another song from Elba is called "The Haunting of Rocky Face Ridge" home of another Civil War Battle in Georgia. Georgia Hubley produced the third Antietam album, Burgoo, which is a traditional Kentucky stew served on Derby Day.

Links:
Antietam's Myspace streams songs from their most recent album (Victory Park), one cut from their 1994 Rope-a-Dope and a 2004 Esopus compilation cut.

So what DID Wolf Knapp do after leaving Antietam (or after Antietam left him)? I have that Your Food album, and I remember an interview where he said that Wolf "is my real name, not my punk rock name". I guess I could google him myself, just thought you might know.

All I could find was that he played for a number of bands that I hadn't heard of. He appears in a 1996 Mecca Bodega album for one and he also backed up Tara Key in one of her solo efforts.

There is a reference to a bassist called Wolf Knapp playing in a band called Stretcher ("alternative metal"), but according to their website they have a different player now.

I can't find any references to him doing any further songwriting, though.

Wolf Knapp actually founded Stretcher, but moved on. He's been in and out of Jazz session playing in NYC, but rumor has it, he's still writing, and YES, his stuff for Antientam was thier best. Seen him live? .

Ha! It's me, Wolf. Believe it or don't. Just comparing myself on Bing and Google, for salaryman-activity-related-purposes and found this.

FWIW, after Antietam I toured as bass player for Christmas, opening for Husker Du for 5 weeks. The Huskers were heroic. Also 5 weeks (felt like a lifetime) with Opal, soon to be Mazzy Star, opening for Jesus & Mary Chain. The drunkest people I've ever met. Often an entertaining kind of drunk.