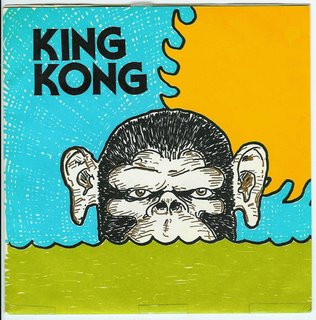 7" EP (1989). The first King Kong EP came with absolutely no information about who was behind it - sort of a hipster in-joke I guess known to a chosen few - at least until some of the fanzines in on it left some hints that it was yet another Louisville spin-off of Squirrel Bait. This record is all (Tweez line-up) Slint and I suppose a bit of a collector's item - Slint disappears in the later records and it's mostly (Tweez) bassist Ethan Buckler and guests.

The first side has two songs -- "Movie Star," the opener is the centerpiece and the more ha-ha pedestrian (get it?) "Camel's Walk Song." Side two has an extended song called "Chicken Shit." What unifies these songs are a sort of hipster detachment (some have compared it to B-52s and I suppose it was in that respect) and a new wave funk-rock styel. In later recordings, Kong morphed away from this - and while I would classify this recording as "post-hardcore" - it seems the later stuff was more firmly entrenched in a pre-hardcore attitude (blues, soul, conceptual, albums, etc.).

For my money, "Movie Star" is the best throw-down of the bunch. OK, so forget the trite lyrics (movie stars are clueless, shallow morons, we know this), and isntead groove on surprising classic blues-funk boogie-woogie new wave dance thang that kicks [substitute your favorite thing to kick].

It's for cool puppet robots, I guess (ooh, I have received the hidden message - movie stars are cool puppet robots! Wowie-zowie). For reasons unclear and most unfortunately, "Movie Star" ends abruptly - I would have extended it a bit more and maybe trashed "Camel's Walk" (a lesser piece in several ways).

Side two's "Chicken Shit" also has a funky groove and some awesomely recorded drums for the period / venue - was Albini behind this?... but in contrast to "Movie Star" - it overstays its welcome with a repetitive two-minute coda in which Buckler monotonically intones "anything but that" while someone squawks like a chicken - ha ha. Anything but that indeed.

Even if you don't like what Slint became (I don't, in case you care), you have to admit that the Bucker-Pajo/McMahan-Walford bass-guitar-drum combo was very, very, very boss (not to denigrate Brashear, he's a groovy cat too) and with them playin' this here white boy funk, that's enough of a reason to get this record. It was reissued as a CD single last year so what're waiting for?

This has one of my all-time favorite 7" covers - the giant ape angrily ascending over the water and threatening to overpower the sun makes the bright colors, um, ironic. But those big ape ears make it kinda funny at the same time. Note the scotch tape at the bottom - that's the way it came. I love seeing the evidence of hand-assembled records...

Links:
- A 1995ish interview with Ethan Buckler via Thrust Electronic Webzine
- King Kong's discography, Drag City home page
- King Kong Website is hopelessly out of date but this FAQ is written by Buckler

King Kong is also a movie star (in the surreal sense) so when I listen to the song I think of a big ape in sunglasses, convertible and blonde girlfriend cruising down Melrose Avenue.