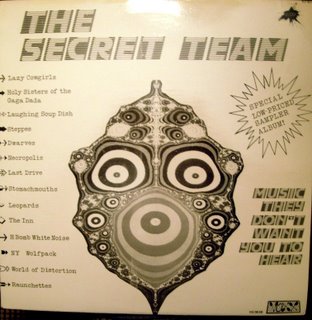 Everyone should know the story by now of Bomp! and the late Greg Shaw... 60's fan of longhair rock, dispirited in the '70's as rock petered out, starts a fanzine that draws the likes of Bangs and Meltzer and then starts one of the first small rock labels publishing the likes of Devo, Iggy Pop, Flamin' Groovies, embraces punk in '77, starts power-pop (new wave) with Stiv Bators, Plimsouls, Josie Cotton regrets starting powerpop when the majors embrace the term and push limpdick posers, pushes on, starts Voxx Records to allegedly publish "purist" garage rock (by 1988 Bomp and Voxx are pretty much interchangeable enterprises), sparks a neo-garage movement in the 80's and 90's (Cramps, BJM, Warlocks) -- which lays the groundwork for the holy ascension (and current freefall) of the Strokes, Yeah-Yeah-Yeahs, Arctic Monkeys and Hives-- but on the other hand has helped sustain and spark Greenhornes, White Stripes, Racontours and so on so it wasn't all bad.

Back in the olden days before myspace and MP3 blogs, labels had to (and still do) put out limited run, low price compilations to generate consumer heat for their bands. God knows they weren't getting played on the radio -- college radio maybe but in that period most college radio just took cues from NME and The Face and played Brit Pop -- or anywhere else for that matter. So records like The Secret Team come out and they're kinda fun records - getting one to go through what were no doubt Greg's personal picks (he provides loving liner notes for each cut on the back of the album) from a hell of a diverse bunch - about the only think holding them together was lo-fi/DIY recordings and maybe a shared sense of bathos -- I mean how ridiculous is it to be in a garage band in 1988? Might as well laugh. Pretty damn ass cool if you ask me but it wasn't like you were going to quit your day or night job with the residuals or gig take (and so it goes today for like 9 million bands).

So shut up already and listen to some of the tunes. By the way, there's a funny copyright notice here:

All rights reversed; all wrongs reversed. Unauthorized duplication might actually do a lot of good -- go for it!

Some songs (but not all of the tunes):

"Can't You Do Anything Right?" - The Lazy Cowgirls - the band from the home state of punk (Indiana) that put together pure garage rock with influences ranging from (early) Beatles, Ramones and Black Flag. At the time, one of the biggest bands on Bomp! This comes from their Tapping The Source. I liked that record at the time but I just can't always get into this muffled, recording. Still, it's a pretty great cut to start out the weekend with. Bonus link: Required reading for Cowgirls fans from Cutting Edge mag. They call this track "high octane frenzy"...

"Speed Freak" - Stomachmouths. This band of degenerate Swedes were on the Voxx label and prove that that garage rock from Sweden didn't start and end with the Hives and International Noise Conspiracy (respectively). Hell, it didn't start with the Stomachmouths - they were out and out revivalists but weren't afraid to admit it. Too bad they aren't around today, though I doubt this ode to drugs would have been featured on any iTunes commercials. Fan tribute site.

"Mister Mist" - Holy Sisters of the Gaga Dada. Junkyard rock - found noises, silliness abound. A tripped out Siouxsie Banshee meets Spike Jones. No doubt Xiu Xiu copped some of their ideas from the Sisters. Anyone have a copy of their cover of "Pretty Woman"? Pass it to me, please, please, please?

'H-Bomb White Noise" - H-Bomb White Noise. Get rid of Mark Mothersbaugh (he's too smart) and cherry-pick a new Devo from a buncha German prog-goth rockers, stick 'em back in the garage and they probably would have invented something like this.

Awesome H-Bomb White Noise Fun Fact: The married founders and members of H-Bomb White Noise - Roderick and Randa Milliron - also own InterOrbital Systems, a rocket manufacturing and test site in the Mojave Desert. Their companies goal is to make interplanetary space travel affordable and reliable! The band practices in their hanger and they are currently selling the first orbital space tourism tickets for a private-sector rocket (set to launch in 2008; ticket price: $250,000 - rebated after two years). That's literally outta this world, maaan!

"Wolfpack" - N.Y. Wolfpack. Some Albany straight-edge that describes both the attraction of the "scene" to young men and its fascist no-fun undertones. Very Black Flag influenced and part of Greg Shaw's very small foray into hardcore and thrash so it's nihistorically interesting in that respect. A e-zine called How's Your Edge interviewed the, er, leader of the pack not too long ago and he basically recounts the history of his band as a series of fights.

"It Can Happen To You" - The Leopards - You gotta love the ironic sequencing here. About the wimpiest, hookiest, poppiest song comes right after the loudest most obnoxious song (a death-thrasher called "Killing Kranium"). Although the Kansas City-based Leopards were basically pigeon-holed as a bunch of Kinks lovers, this is more reminiscent of the most treacly moments of Paul McCartney. And I've made my peace with Paul so this is alright. Trouser Press entry for The Leopards.

"Voices of Several Tourists" "Tourists from Timenotyet" - Steppes. Astute listeners might suggest that The Steppes (or sometimes just Steppes) played some influence in some of the prog-psyche-garage bands as Flaming Lips, Breeders and Mercury Rev -- although I have little evidence they ever listened to 'em. This Irish band was supposedly very, very big in Europe but never gained much traction in the US. Some of the best stuff on the record and was enuf for me to order Harps and Hammers from Bomp!

"Burning of the Midnight Oil" World of Distortion - This Boston band has previously received the VM treatment but as this is about as close to the early hairy chest classic blues-rock sound (somewhat different from other stuff I've heard from the band) that this record has gotten, it's worth a note.

And even though it's out of sequence, there's nothing like some Dwarves to enjoy the grotesque absurdity of the current fucked up world: So I leave you with "Fuckhead"


Links:
Go visit Bomp! Records. Most of the bands above have some vinyl or CD on their mailorder list (although this is long out of print). If you order, you'll get an email from Shaw's long-time partner Suzy Shaw. Plus they have a great new limited run purple vinyl Warlocks 7" that's one of those singles that sounds as good at 33 1/3 as it does at 45 RPM.

While you're there read Greg's 1994 history of Bomp! Records. Hell, print it out and read it to your kids as a bedtime story.
Posted by Jim H at 5:46 PM

just found your blog through a series of links from other blogs... and you totally made my day, this is all very awesome. much thanks and keep up the awesomeness...