Has Anyone Seen Sam Lowry??? 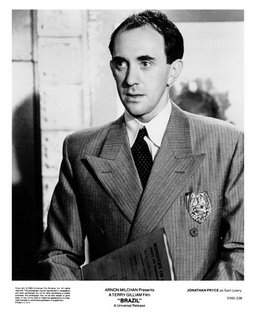 I'm a sucker for all the versions of the song "Brazil" - ANALOG arts ensemble blog has Carmen Miranda's version that I hadn't heard before. She's great for dreaming in technicolor of that "amber moon"...

And that escapist trait of the song was probably why it's such a great centerpiece of Terry Gilliam's great movie Brazil (there's certainly no other reference to Brazil in the movie!).

-- There's a bit of a cheesy Spike Jonze feel to this version but at the same time it's laidback - it could be just that with this melody and the latin percussion you can't help but lean back. The trumpets slur and at the end there's a big farting sound from a tuba(?). It's light and fun but played like maybe a bad drunken samba band might play it. I can see why Muldaur doesn't exactly reference it on his site. The soundtrack also has a dream version of the song by Kate Bush AND a full-up samba version of the song ...

As for Muldaur's Latin-swing version, I can do that Latin dance with the wrists going up and down and my feet shuffling (but only in my bedroom, alone - and no, I don't have a web-cam).

If you have another version of "Brazil" (and there are plenty - just peruse iTunes for one point of reference) - please post it or write about it and let me know where and I'll link to it.

Absolutley amazing movie. Ahead of it's time. The Criterion Collection is the best as it has Gillian's director cut but also the bastardized version the studio wanted released with the happy ending with everything sweet and wonderful. sick. Both have commentaries and in the crappy version they point out the difference in editing and the dubbed speech that changes everything. It's 3 dvd's and goes arounf $45.

There's behind the scenes xtras too.

Have you heard the version by Dori Caymmi?

i have many many versions of this song also, i will comment again with a zip file on rapid tmrw

Hi there. Have you heard Tav Falco´s Panther Burns version of Brazil? I like it. How many different versions you spotted in the film?
rami.olavi@luukku.com

Not a single one of the links works...

All of the links work currently except for the MP3. Most MP3s are only up for a short time, sorry.