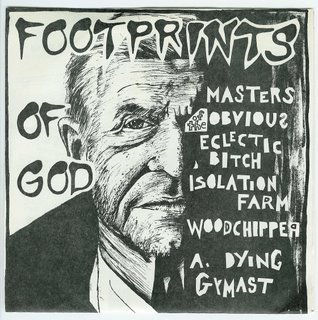 Joe Malinowski of Connecticut put out two of these 7" compilations in the late 80's. And evil Ronald Reagan on the cover and a funny Jimmy Swaggart drawing on the back.

These were all CT bands.

I'm laying down two of the cuts - both great for your Friday evening mix (assuming you are as twisted as me).

"Crystallize my Penis" - Masters of the Obvious (nee M.O.T.O.). Paul Caporino is a one man singer-songwriter-guitarist who has been sticking his long middle finger up the collective rectum of conventional rockstardom for about 18 years. This is one of his (perhaps the) first appearances on vinyl. Here he's vying to be the gross-out Kenne Highland. The highlight of the record. Paul Caporino has said he wrote it after he took care of a friend's cat who had to eat wet cat food or else the poor things penis would become crystallized. He also has admitted he wrote the song to get attention.

"Sandra's Getting Married" - Woodchipper. A skronky deconstruction of the John "Cougar" MellonCAMP / Springstine working class Tin Pan Alley so in vogue at the time... it's hinted in the liner notes that Damp fanzine editor Kevin Kraynick is on vocals. Their one and only recorded song and for that we can be thankful.

"Mother Goose and Mr. Hyde" - Eclectic Bitch. Before anyone had heard of post-partum depression, Dawn Cook was suffering and singing about it. Sounds very much like something Bongwater here. This band eventually became Bimbo Shrineheads (and then Shrinnirs and a few dozen other names) - anyway they recorded the sublime YLT-ish "I Will Die in Willimantic" (recommended) - the highlight of the second Footprints compilation - you can download that song and others here.

"Fuck you I'm God" - A Dying Gymnast. Scott Munroe's legacy to the lo-fi punk world. Thank you, Scott. Selfish Cunt ought to cover this if he hasn't stolen it already.

"Useless Things" - Isolation Farm. Sneering 4-track rock that namechecks all the stupid things about the '80's.

It's great to see folks getting a chance to hear "Fuck You, I'm God" again. Just found Scott Munroe's myspace page a few days ago.

Not sure if you knew, but there was a third Footprints compilation - Crystalized Movements, Paul Flaherty & Randall Colbourne, the HellCows, and LMB. Should've been a 4th volume with the Sun City Girls, Snake River, Brian Johnson (the drummer, not the AC/DC vocalist), and VHK; but it was delayed, and eventually scrapped.

Also, Tulpa & Vacant Lot co-released a Woodchipper 7" ep. They were a band that needed to be seen live to be appreciated. Their upcoming live double-album should clear up any misperceptions of what 'Chipper were about.

Thanks for all the links. Been reading Vinyl Mine and Vinyl Journey for a while now. Always thought "The Savage Wank of Paolo Mantegazza" was a pretty decent cut and was disappointed more folks didn't take notice.

yay, MOTO returns to columbus this saturday! much debauchery will ensue.

How will it be different than any other night for you, Squirrel?