Caption: Bobby Bare is so excited about playing Austin, he can't keep his hands out of his pants....
Or should I call this "Best of South Of" - as the Washington Post tells us that's how all the "hipsters" refer to SxSW - someone has called me a hipster in their de.lic.ious (whatever!?) capsule description as in "hipster digs through his record collection."

I am not nor have I ever been a hipster. I have always been outsider - I don't have a funny haircut, a hipster job, I'm afraid of tattoo parlors and my gut makes any ironic t-shirt look, well, ironically ironic.

At any rate - this LAST (applause, applause) posting goes into the remainder of the alphabet and ties up loose ends - namely the A-G songs that were in the second bit-torrent, which hadn't been released when I started this.

First, let's do the honorable mentions. The following were a bunch of heretofore unknown (to me) bands that had songs that almost made the cut - let me know if I'm wrong not to give them 5 stars: The Fever, Uncut, volcano! and Willy Mason. Here's some of the notable has-be--- I mean comeback: Chris Stamey, The Effigies, Garland Jeffries, Zolar X and Billy Bragg. And finally, here are the indie mp3 blog darlings that you probably have already downloaded to death elsewhere but are worth checking out: Band of Horses, The Boy Least Likely To, Earlimart, The Weepies and Wooden Wand. 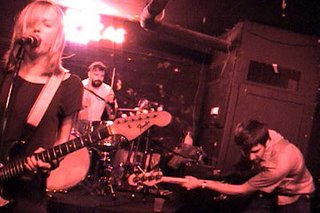 Caption: Who's your Ume, bitch?
Ume - "Wake" - I'm glad I kept listening to this as the beginning is sort of a ho-hum doom metal that sounds like it was recorded in the living room but then Lauren Larson's ice-chipped voice starts, uh, crooning and it all kinda makes even less sense - which in effect becomes the charm of the song. She sounds like my cat used to sound when he had a sore throat. The song is kinda like a lost prog-diddle from Scrawl's Smallmouth.

Vague Angels - "The Princess and the Newt" - Chris Leo's lyrics read like the internal voice of a novelist which, in fact, he is. Here he's in bed trying to scribble lyrics and hold a conversation with his girlfriend, which is apparently near impossible.

Very Be Careful - "El Camionero" - Vallenata (Columbian folk) music is accordion, bass and percussion, mostly and its the specialty of this L.A. Band. Gotta love their band name.

The Weird Weeds - "Holy Train Wrecks" - Like Animal Collective, Weird Weeds use acoustic guitar folk as a jumping off point to make what is in its essential "art" music - here describing the quiet before and after an accident.

Whitehouse - "Munkisi Munkondi" - And here is art music on the opposite end of the spectrum. Whitehouse have only gotten better at pushing the envelope of industrial-sound based music. Although, I'm wondering why they're wasting their time in Austin when they could be headlining the No Fun Fest.

WHY? - "Rubber Traits" - The lyrics sound like something from Trent Reznor while the music is pure Death Cab meets Brian Wilson. Dog lovers will love the accompanying video.

Xiu Xiu - "Muppet Face" - I love Xiu Xiu. Only Jamie could conflate the death of a little kitten into the politics of the day and then back it up with a turkey call. Has the best huhwhah? lyrics since, well, "support our troops, oh!": 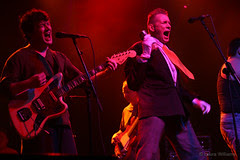 Auktyon - "My Love" - The only Russian band in Austin this weekend will be Auktyon - who combine Russian folk rhythms, sensibilities and melodies with that alt-rock thing. For the very stupid (like me), think Pogues from St. Petersburg, Russia. Picture via Laura Williams

Bettye LaVette - "Down to Zero" - Joan Armatrading's original version was laced with sympathy for the ex-boyfriend who finds himself on the reverse rebound -- probably because Armatrading could relate - after all, he broke up with her first, right? Bettye retains almost none of that sympathy and instead seems to want to rub ex-boyfriend's sad sack face in the dirt -- it's only at the very end that she relents and opens the door for the poor little cur. Great soul update of a 70's under-rated classic.

Billy Faier - "New World Coming" - With all the comeback mania of 60's songwriter-folkies, Faier seems poised, for well, something - I mean he's gotta be in his 70's by now, so he's due for it. And he's no Johnny-Came-Never, he's been around playing the coffeehouses forever, has a resume stretching back to the 50's and can meaningfully improvise on the banjo - most of this 7 some minute song is basically improv that surrounds a version of Faier's Seegerish signature song from 1973 sung in Faier's now gravel-laced voice.

Bobby Bare (picture at top of posting) - "Are You Sincere?" - Weren't bobbysoxers like the emo-kids of the 50's? Here's a third bookend to Elvis's "Are You Lonely Tonight" and Nat King Cole's "Ramblin' Rose" - from Mr. Bare, who was recently pulled out of retirement by his indie-rock son (who is also playing at the festival) because, well, everything that was old and good is hip once again. Check out that bass line in the beginning and tell me you don't think of something James McNew would do. Check out the three-girl backup vocals intoning "Bobby, Bobby, Bobby" and while its kinda cheesy, you only wish you had a three-girl back chorus singing your name.

The Bronx - "Heart Attack American" - Someone has a big hardcore punk collection and even updates the sound a little with some v. tight guitar and drum flourishes. Easily the best HC punk song in the entire 932 song collection, if that means anything to ya. They're about to go onto a major label (Island), so get 'em before they start to suck. 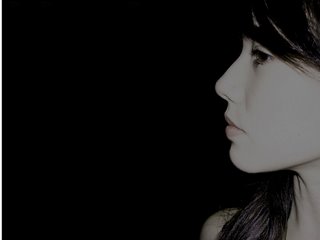 Caroline - "Where's My Love" - She (pictured left) sleeps in her recording studio and sings as if she's lived in America all her life. Pitchfork call it: "a beautiful experiment in minimalist pop arrangements and angelic vocals" and all the emo-boys are already crushing on her but don't hold that against her.

Clipd Beaks - "Smoke Me When I'm Gone" - I'd say smoke it now before they're gone. Best use of analog reverb I've heard this year.

Diamond Nights - "Destination Diamonds" - Powerful cock-rock in very tighty whiteys - open your mouth, no teeth please. Perfect music for the soundtrack of a yet to be unwritten movie about stupid co-eds (paging Lohan, Spears and Simpson). Currently looking for groupies to complement their bullet belts (really, I'm not kidding - this is a kool kut).

Shearwater - "I Can't Wait" - I had passed this by in an earlier posting but it came up on the Shuffle and so I'm giving it that proverbial American second chance. And they're the only band that get this honor this year, so isn't there like an award? Why yes, there is - Shearwater, I have an unopened copy of The Meatmen's War of the Superbikes that is yours for the claiming. And since M comes before O, you can file it right next to all those Okkervil River CDs you had to go buy.

SXSW: the annual reminder of how the democratization of art ain't all good.

See some pictures I took of Diamond Nights when they played in St. Louis here...

Love the Dengue Fever tune. And I also love the photo of Caroline Lufkin.
Thank you!