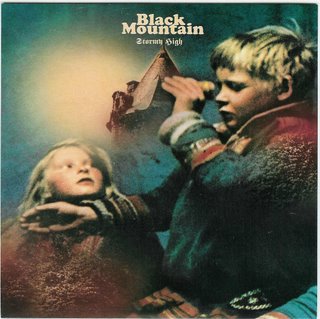 Continuing with some rips of some more contemporary music, at least if you define contemp as being recorded in the past few years despite sounding like it could have been written and played as is 30 years ago...

... comes this teaser Black Mountain ltd. edition single - marble wax with dashes of muted secondary collors (yellow, purple) very cool to look at (click the image below for the full groovy effect). I liked "Druganaut" EP from last year but still haven't bothered to get BM's first record. "Bicycle Man" struck me as a partic. jagged boy-girl vocal cut that got my finger hit the repeat button more than a dozen times throughout the end of last summer. Great for (fantasizing about) running down bicycle riders, ha ha. Seriously, a fine little chugging tribute to Blue Cheer.

Someone else has already ripped "Stormy High", hairy stoner rock proof that they weren't contaminated by their prissy 2006 tourmates (Coldplay, shudder) but I'm just as good with the flipside: "Voices" - a more mellow country groove than "Bicycle Man"'s 60's bombast - but both in the own way pay sad tribute to a music long thought extinct - which seems to be the reason for Black Mountain (and the Warlocks for that matter). Also, Amber Webber pronounces "fire" as "farr" and "glee" as "guh-lee" which I find oddly sexy. 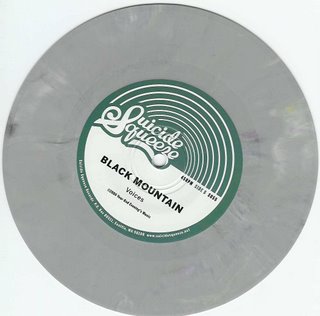 Man I can't stop listening to this 7"

I agree with eric!Voices is an amazing track, i wish "stormy high" was as chilled and beautiful this! Great rip!thank you for introducing me to this band