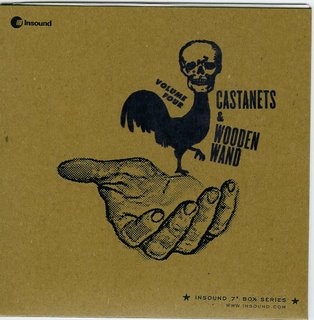 So, since Ray Raposa and his Castanets are in town tonight with Black Heart Procession and they put out one of my fave albums from last year, here's a rip from an exclusive 7" that Insound sent me because I have enough disposable income to become one of their top 1000 customers.

It seems a shame that this isn't more widely available tho' I'm sure it will show up in other compilations or future Castanets collections.

"Lucky," a semi-disguised protest song about somebody on the run (an AWOL soldier?), is more trad-folk than their more chaotic and lightning-singed First Lights Freeze but it shares the downbeat simplicity and world-awareness of their other music.

Red Hunter of Peter And The Wolf accompanies Reposa on this cut. Their song "The Fall" was featured in a past posting here.

Tour info here -- at some point they will be playing with Raposa...

Post Show UPDATE: Castanets played a nice but short set. In this incarnation of the band, Raposa plays somewhat minimalist drone Fender guitar and a very tall country girl in pumps played weird response on a Chet Atkins-style guitar. She had huge eyes and spent the whole set fixed on Raposa as if in some sort of telepathic communication. Neat. A bespeckaled bassist in a cowboy hat (Jana Hunter!) and a bearded drummer (Matthew Houck of Phosphorescent) and effects dude (drum machine, noise boxes) in the back completed the band. The last song went into a sort of free jazz drone feedback loop. Raposa starts packing up timing each unplugging of the chord to fit with the music while the band looked tentatively on. The Devics were also on fire (think of them as a blue flame) - very nice singing from Ms. Lov. Black Heart Procession wore thin after 1/2 a set. I can see why people compare Akron/Family with them but way too much theremin, maaaaan...

Planet Claire has some MP3 tracks from a February 2006 Jana Hunter - Castanets on-air show in France. Link via The Perm & The Skullet...

this has nothing to do with anything above but La Blogotheque has some 1969 tracks of Elton John covering Nick Drake...

I didn't notice an email address, so I'm leaving this off-topic comment.

Yesterday, while sorting through a stack of unlabeled storage boxes, I found a handful of Biker Mutt LPs that I had taken in on consignment about 15 years ago, but never had any luck selling.

Please let me know if you would like the LPs returned. You can reach me through the withdrawnrecords.com email/contact link.

'Sorry about the decade+ delay.