Sufjan/NSO and others at the Kennedy 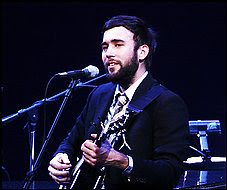 photo by andrea bruce - washington post
Well, there was a little concert last night in my neighborhood. I didn't see the headliner but had an awesome night at the symphony... Above is the Washington Post picture of Sufjan doing his thing looking all like a hick going into the Big City. You can read their review of his performance but here's an excerpt:

To listen to Stevens is to wonder what it's like to live in his head. It must get loud in there, with all those Beatlesque references, the baroque instrumentations, the darkly rhapsodic lyrics and those lushly romantic medleys all competing for attention. One gets the impression that Sufjan played a lot of Dungeons & Dragons as a kid. If he spent his adolescence toiling in rarefied geekdom, banging out Mozartean sonatas on a toy Casio in Michigan's Lower Peninsula (as his MySpace page suggests), then his Kennedy Center performance last night was a nerd's sweet revenge.

The Symphony played Pictures at An Exhibition - rock fans will remember the Emerson Lake and Palmer album of that same name (well some rock fans will remember it). But this was the real deal - nine movements based on a different painting. If you've never heard the symphony live -- and it's a rare thing for me -- it's something else especially in a decent acoustical theater.

The NSO performance is here.

Photo used without permission - but here's a link for purchase in case you want a version suitable for framing.
Posted by Jim H at 6:42 AM