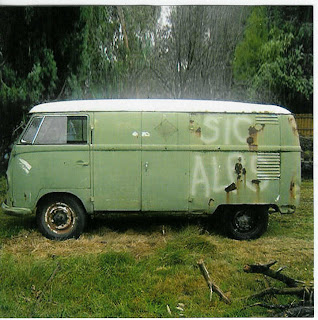 This CD, coming as it is from a two-man band with roots in The Hospitals and Coachwhips - both of whom I adoor - is the reason I gut blistahs on mah fingahs... and NOT what you are thinkin. West coast guitar and (mostly) drums bliss-noise-garage-psyche, simply put - tailor made for my ears, tired as they are of uber-cold indie emo-pop and meandering Americana that's soooo prevalent these here days. A test of a good try at this type of playing is that it can induce a natural high if listened to correctly (distance from the two speakers, volume, that type of stuff, trust me).

....so - I'm pretty sure that van on the CD cover is where they recorded this - that is after they ripped everything out and coated it with machine oil, lit a few hundred candles and set up a 30 year old 4-Track, is my guess at least. And yeah, that gives the whole thing a rusty, found-in-a-musty-basement aural sheen and smell (might as well go for broke in mixing metaphors).

CD was purchased via Forced Exposure. Visit the Sic Alps 'n' get you info on some of their other recordings -- I have their Semi-Streets 7" in my stack-o-vinyl for future listening parties. Big ups for the band for deleting their Myspace site because of "crappy ads, Madonna videos, and the fine print about them owning your tunes"... (1/2 snicker).

MP3s posted with permission of the band - other highlights from the album are "Down Comes The Perm" (available on their website), the stomp-drunk "Stories" and the two guitar screecher "Reconnection Land.":

"Semi-Streets" (video) - Ever been lost and confused?
"Surgeon And The Slave"- At some point, masters will run out of slaves
Posted by Jim H at 6:45 PM