All I Want Is My Mamma - God Bullies 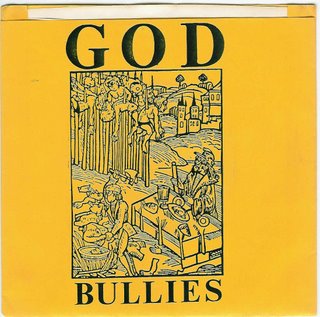 From the reigning boy band of the late '80s, back when they graced the covers of Tiger Beat and Sassy centerfolds, comes this melodic and dance floor friendly swinging hit. On the Top 40 charts for weeks in that glorious summer of morning again in America 1987, "All I Want Is My Mamma" was eventually toppled by that soulful boy duo Happy Flowers' "Mom, I Gave The Cat Some Acid."

In his later solo years, teen idol Mike Hard would look back on these formative time of God Bullies and defend their snippy guitar pop stylings, even coining a new term for it -- "dirty pop." I contacted Mike last week in his home in L.A. but he says he's had it the press and he's just gonna "keep on keeping it real" and continue to produce his brand of hip-hopping sweet pop. He says it's all about keeping the "girlies movin'".

(This is all a lie - God Bullies were teen idols only in some far, forgotten corner of a Hell populated by suicided overweight teenagers and masochistic pygmies).

"All I Want Is My Mamma" - God Bullies

In Other Teen Idol Blogs:

Tom Hazelmeyer on his young charges:

TB: Were the God Bullies as whacked out in real-life as they were on record? Did the act extend beyond the stage or was it not even an act?
Haze: No, they were definitely a collection of miscreants and oddballs. It definitely wasn’t a case of putting a burning bible out on your bare chest during the set, then go to your day job as an accountant right after. Mike Hard is all you see on stage all the time, ha-ha.

Hi Jim -- just wanted you to know that I'm featuring your blog as one of our Editor's Picks this week. We'll also be linking it from the AOL Journals main page.

It's a special edition, since this week's picks are being made in honor of a former boss who'd died recently. As I note in my entry, in a nice bit of serenditpity, I was looking for Journey blogs, and came across yours.

Joe, sorry to hear about your friend and boss. Thanks for the link.

Hey all, I’m helping Mike to sell off some left over tour merch from: God Bullies, Thrall, TheyNeverSleep, & Mike Hard Show. Please click on the link and search in tshirts and records and let me know what you think. We ship worldwide: http://thedarkslide.storenvy.com/

Hey all, I’m helping Mike to sell off some left over tour merch from: God Bullies, Thrall, TheyNeverSleep, & Mike Hard Show. Please click on the link and search in tshirts and records and let me know what you think. We ship worldwide: http://thedarkslide.storenvy.com/