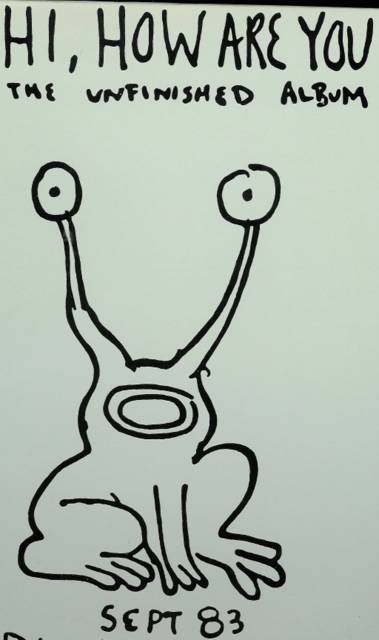 With the imminent release of the hotly anticipated (second) tribute CD to Mr. Johnston and the reissue of several of his releases, I thought it would be worth digging into a few tracks from his first vinyl release, the 1988 Hi, How Are You. The actual music on this album was first recorded in 1983 as one of Johnston's cassettes that he would give away and sell through the mail. They became a cult item among the indie cognoscenti and eventually landed in Gerard Cosloy's tape player leading to this.

Johnston is the type of guy who has songs in his head and can't wait to form a band, play a few gigs to raise funds and rent a recording studio and an engineer. Fortunately, many of his songs (and in particular these three cuts) are worth putting up with the cheap-o cassette and instrumentation. Making allusions to his long-time struggle with mental illness and his unrequited desire for a girlfriend - "Walking the Cow" poignantly explains the ins and outs of being Daniel - it's one of his early songs that can resonate with everyone and actually sounds like something close to a traditional song. I suppose one of the guilty pleasures of listening to Johnston is imagining how it might sound if it was covered by such and such band -- so it'll be neat to hear TV on the Radio cover this in the upcoming CD. "Hey Joe" is a tribute to both his beloved Beatles and Joe Lewis (for whom the tape was dedicated) featuring a piano backing - most of his tracks here were either muffled casio, boxes or appropriated background tracks. "Keep Punching Joe" steals a jazz track to directly tell his back story and its the angriest song on the album.

It's hard to really write about Johnston and why I still enjoy some of his cuts lo these many years -- like his one-time collaborator Jad Fair -- it takes a certain patience to "get" him and sometimes, as in a few of the tracks and extra poorly recorded ambient sounds he throws in here, that patience may be a long-time coming. For the "lo-fi" fans out there, he was one of the first and the line-up below of folks (Waits, Flaming Lips, Beck, Eels) willing to cover him is pretty impressive, you have to admit.

Notes: Johnston's family runs several websites. Start with the official site - Hi How Are You and you'll eventually find the other sites. The tribute CD was announced for release on Sept 21st. Proceeds will go to Johnston's medical bills so it's a good cause and you get some of the better bands and performers walking about these days. You can buy it directly from Johnston's web site.

6) The Rabbit ~ Good Morning You


Additionally, 1990, produced by Kramer in 1991 and with guesting from Lee Renaldo and Steve Shelley was released last week. It's perhaps one of his best later works. Another Kramer produced album, Artistic Vice. CD Universe has them at good prices. (1993) was also reissued. This features his first real band.


You can also buy all of Johnston's music (including Hi, How Are You -- now on a double CD) at Johnston's own site. The tribute album will be sold there as well and would probably be the best way to buy it being that its for a charitable cause.


UPDATE: A reader writes in (edited for typos):

Hey I saw the daniel johnston post. I have a whole mess of good news for you. I have a friend at gammon reccords. I helped him out putting together the album and he gave me a pre release copy a couple months ago. I have told him he should release some tracks to some MP3 blogs. He thinks it's a good idea with no negative draw backs. Over the last two days we have been talking about doing this friday or saturday when he receives word from Apple if they will do a early release on iTunes. Once we get the news I can send you a copy of impossible love and gordan gano's cover.
I realize I am partial, but the album totaly blew me away. Thistle - Love Not Dead sounds like blondie doing Maria. the tom waits track is crazy it has him doing wierd acapella rythem shit that is looped while he plays guitar and sings.

Hi, this is my first time on your blog. I am also converting LPs and cassettes to my hard drive and was wondering if you used anything to clean up the sound.
My email is hammockbrain@verizon.net