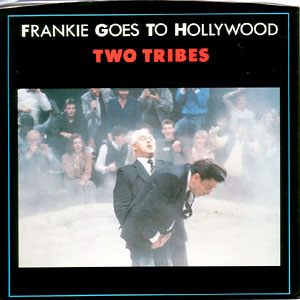 I think when pressed as to whether these were indeed all of the Frankie Goes to Hollywood band members playing on this tune, producer Trevor Horn deferred and implied that while he had hired some pro musicians and there were FGTW playing somewhere in the mix.

And I sure dug that video of two old men kicking the shit out of each other, didn't you (banned in the UK for being too violent, ha ha, but it got lots of play on MTV)?

This 12" included two mixes of "Two Tribes" - one, an overly long "Annihilation" mix of "Two Tribes" and the "Surrender" mix which emphasized the instrumentals and that bitching guitar underscore (dadadadumdadadadadadumdedumdedum) that makes you wanna put on your Miami Vice shades and go steal a cigarette boat (well, not really)... there's also a hyperactive version of "War (What Is It Good For)" that falls flat, a mock-interview of the band acting as if they were the second coming of the Beatles and a dry post-industrial spoken word piece ("One February Friday") featuring the British actor who was the same voice one would hear if the U.K. ever had a nuclear war.

So, Frankie Say: come relive the Cold War paranoia, Trevor Horn style, because when two tribes to to war, a point is all that you can score... now I gotta get back to work on the black gas.

Linkage:
Wiki entry
Band Website - FGTH plan a 2006 tours. They have tried several times to get Holly Johnson back in the group but he has backed off.
Album cover picture taken from classic 45 where this record retails for $12.00.
Posted by Jim H at 9:17 PM

Wow! Didn't expect you to cover this one. Truth be told: I was a MASSIVE FGTH fan before punk hit me at 13, and I can always thank the band for leading me in that direction (it may seem hard to believe now, but FGTH were constantly compared to the Sex Pistols at the height of their fame in 1984). The company I work for distributes the Repertoire label - the only label on earth who actually keeps FGTH's recorded works in print - and I whacked a copy of Welcome to the Pleasuredome on the other day for old time's sake. The verdict: it STILL kicks! So sue me, FGTH were a GREAT pop band (at least for a brief period) and their version of "Born to Run" is a knockout. No shit. Give it a listen. For a Top 40 outfit in the '80s, they were about as subversive as it got: the gayness, the politics, the pseudo-dadism, etc. Am I alone in thinking this??

So you're saying Frankie broke your cherry (Neil Diamond and Sonny&Cher broke my cherry, so I ain't making a jape atcha)?

But yeah, they were a decent subversive act that somehow seeped into the mainstream. Too bad that they had no personality nor couldn't write anything beyond three basic songs.