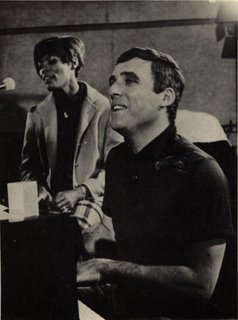 I can't help myself - I'm on a Bacharach kick. Ones with asterixes come from indexes found via Singingfish.com...

Burt goes political in his latest album At This Time

Is that a picture of Burt B or John Kerry on keys?

Love this version of "Look of Love", ubt it's playing at the wrong speed...and sound like the Chipmunks (as in Alvin)...please correct the speed or re-download.!

Someone gave me a call to say my demo's version of "The Look of Love" was on your blog. Thanks for picking it up and I'm glad you like it but it was downloaded with a "glitch" of some sort...it plays at the wrong speed and sounds pretty funny actually. But for true Burt B. fans, (or anyone who's heard my real version), PLEASE download again so it can be heard the way it was meant to be heard. Thanks.
(from Bobbe Shore)

Thanks - it sounded fine when I listened to it - maybe my autism was kickin' in.

I am not a Cult of Springfield* kind of guy, but for my money there is no better version of "Look of Love" than Dusty's.

*And we all know at least one.

Just a manual "trackback" for our lil' ol' blog as we were inundated with hits today from the San Francisco Jane's Firedoglake and people have left some comments there as well.

As for Dusty - for some reason that's become more tradition than anything else, I can't pass a jukebox without checking for her version of "Look of Love." That and the Clash's "Rudy Can't Fail" so if you're ever in a bar and hear those two songs together come say hi to the guy doing shots of Jack. Lately I've been adding "Body of an American" to the mix as well (Pogues). Two great uplighting songs to drink to. The third one is just a great drinking song.