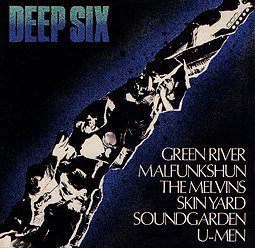 This record is sort of like what a Cuban cigar is to most American cigar aficionados - better as a legend than experienced in real life. The Skinyard, Sound Garden and Melvins cuts are like preliminary sketches. Skinyard's Jack Endino even admitted this on his web page calling these versions "embryonic" and pointing the listener to later recorded versions. Sound Garden always impressed me as a band that hit as often as they missed and here they missed with both feet firmly planted underneath their hair waving heads. And the Melvins had much better years ahead of them though they turn in one decent cut ("Scared") which (I believe) best showcases the Open D tuning that would characterize the 'Seattle sound' in years to come. They have three other cuts on the record. Malfunkshun, a band that broke up before they did much show some scattered brilliance bringing a nice noise-crud-infested guitar to the mix and often odd embellishments (hand claps!) to their cuts but failed to hold my interest for an entire track. It's all cool stuff, I guess, but more of historical interest than a compelling listen.

The best cuts belong to the more (then) established of the bands - Green River reaching their peak with both Stone Gossard and Bruce Fairweather turning in their first incredible twin guitar electric metal minuets (on both cuts) (Steve Turner having left prior to this recording). The cuts are a bit unpolished but that's cool I like it that way. And Mark Arm's vocals will improve in the coming years. There's a neat "fuck it all" attitude they bring to their songs (the Melvins would catch that 'tude soon enough), in partic. "Your Own Best Friend" which ends with a cut-up and an extended sloppy drum solo but is important as it outlines the fast-slow/rave to heavy song arrangements that made bands like Nirvana. "10,000 Things" opens the album and it's clear why it was chosen as it gets your attention even if the backing cuts to that side fail to excite in the same fashion.

But it's the U-Men who steal the show with an incredible closing cut "They" - a swamp-surf- metal-rockabilly-garage bastard of Elvis rave-up that manages to pay tribute to about 10 different songs and 20 different artists and puts The Cramps and live Killdozer to shame if they had any. Unfortunately, it's their only contribution. They wouldn't have been embarrassed opening for Screamin' Jay Hawkins, this band.

Because this didn't fit in the review above, it needs to be said that Deep Six is considered by many a seminal album, sought out by collectors (the vinyl at least), as it predates both Sub-Pop and of course the Seattle hype era and is the first recorded evidence of many of these bands. Also, it should be noted in more than passing that this album and perhaps a good deal of the momentum that propelled the Seattle scene into prominence wouldn't have happened without the industry of C/Z label owner Chris Hanzsek and his co-producer Tina Casale. Although I suspect that the record was also part shrewd business ploy since Hanzsek also owned a studio (still does) which got a lot of work when the Seattle scene took off.

The album was re-released as a CD in 1994 and is easy to find on E-Bay or in used music stores but remains out of print.

Bought this looking for some new music when it came out. Added a whole new sound to my mental mix. I was already steeped in Hardcore and SST, New Alliance, etc. So this fit very well. Classic Rock tendencies taken at a quicker pace and with a bit more acid (and more). You are truly right about Green River and the Umen tracks as they do seem to hold up best. The Melvins 7" that soon followed is to this day a favorite spin. Great site. Thanks for the memories. PSS

Hey great blog! (and fantastic concept). just discovered you after a friend pointed me in your direction. I've linked you up.

Hot damn, you weren't kidding about that U-Men song; I can't remember the last time I heard a band having that much FUN in performance. That singer sounds like the bastard son of Jon Spencer and David Yow - both of whom would have barely been legal to drink at the time.

would anyone have a clue as to its value in the origianl vinyl....i have one, but would like to see it go to someone more appreciative if at a fair price......

Check out a podcast review of the Deep Six Compilation with special guest Mark Yarm, author of "Everybody Loves Our Town: An Oral History of Grunge" on the Dig Me Out Podcast at digmeoutpodcast.com, a weekly show dedicated to revisiting lost and forgotten rock of the 1990s.