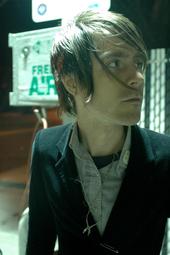 What I said back then about "Princess and The Newt": "Chris Leo's lyrics read like the internal voice of a novelist which, in fact, he is."

Per his book website, Chris Leo scored the highest on the Manhattan Tour Guide test. Here's a sample question from the new, revised guide:

Considered to be Britain's "last romantic poet," Dylan Thomas (1914-1953) was a conundrum as a writer. He was a Welsh poet who could neither read nor write in Welsh. Having become an intrinsic part of the bohemian scene of Greenwich Village, Dylan Thomas lived only to the age of 39. The end came after a binge of almost monumental proportions. He said: "I've had 18 straight whiskies. I think that's the record." Then he collapsed. At which noted Greenwich Village watering hole did this take place?

MP3:
"The Vague Angels of Vagary" - One sentence description: Geographical displacement and the mystery of women are sewn together into one botched up blanket patterned with silky beat prose recitation over a suede repetitive chord progression.