Squeezin Out Some Link-in Logs 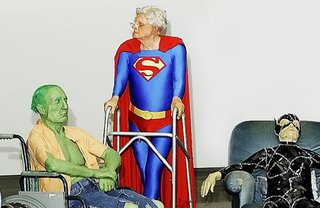 It's that random time of the month/week/day to lay some rad linkage and news on my bitches (that's YOU). And like these aging superheros, we're gonna take our time squeezing this out and milk it for all its worth. Photo via Gilles Barbier, link via boingboing


First let's get the whole Vinyl Mine Seal of Approval shit over with. It's getting old and I'm too lazy to go find the image and link to it... No more seal but here's some worthy music and mp3 blogs/websites that you outcha be czchecking out:

"Finally, the RIAA is arguing against the defendant's counter-filing for legal fees in the case of Elektra vs. Schwartz. Although to early to tell how this may unfold, the liability for legal costs incurred by a defendant who is able to successfully defend themselves against an RIAA lawsuit is an important hurdle for the RIAA. To date, potential liability for the defendant's legal fees have been the only viable weapon against the expansion of the RIAA's paramilitary legal wing."

Bonus MP3. Boing-Boing said some nice things about Sophe Lux so I found their myspace page. Not sure I'd say she's PJ Harvey meets Freddy Mercury - more like Kate Bush meets Blonde Redhead and so I'm digging this one song (the others so-so) and since the tags are all screwed up on myspace, here's another way to download it: "Target Market" - Sophe Lux
Posted by Jim H at 7:30 PM

Sophe Lux rocks. I bought their album and it holds up after many listens. I do love Target Market too.

Marie Antionette Robot 2073 is a crazy rock opera -- love it, love it, love it. But, the whole version is not on their myspace page because the song is 7 minutes long. What you miss out on is the opera and gospel solo -- pink floyd meets queen.