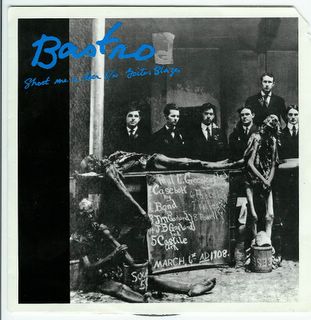 This single came out to herald the release of Bastro's 2nd album Diablo Guapo (translated: Handsome Devil). While Drowned in Sound says Bastro inspired Shellac, I always saw Bastro as a Big Black/Rapeman stalker band but without the baggage, snide vocals and confrontational nature of Mr. Albini. But they had everything else down pat, even down to the drum machine, irony, hats, strip clubs and autopsy photos. This album, though, canned the rhythm black box for a real live drummer, future Tortoise/Sea Cake dude (and then Oberlin music major) John McEntire. Even with the live drummer (um, hello Rapeman...), I'd warrant that it wasn't until Gastro del Sol that Mr. Grubbs truly found his voice. That said, he does have a distinctively different guitar style than Albini even if I can find little difference between their bass players. But I'm willing to put up with a Big Black stalker band any day of the week and a pretty good one at that. I mean consider the alternatives (i.e. the 2nd Squirrelbait album). 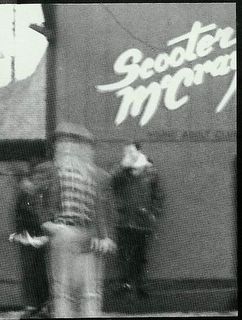 "Shoot Me a Deer" appears on the recently re-released (and re-mastered) Diablo Guapo (coupled with swansong 1990 swansong Sing the Troubled Beast). Its on Drag City supposedly released last month but is now curiously "temporarily available". Oh well, until then, enjoy "Goiter Blazes" -- it's co-authored by Mark Robinson (Unrest) and oddly left off the Drag City release.

Disclaimer: Limited availability - two week timeframe. Recorded directly from vinyl so do not take this as representative of the final sound quality.

I could be wrong and romanticizing the past but when this stuff came out (all the Homestead bands) it seemed like at the time we just accepted it as great new music from homestead and then didn't try to put a label on it. Now everything has to be labeled and packaged as part of a movement whether it's emo, lofi, alt folk, etc etc). At the time Big Dipper lived happily along side Sonic Youth, Scrawl, Big Black and others. I'm not sure that is the case today, but I could have had one too many glasses of Vinfindel as well

but when this stuff came out (all the Homestead bands) it seemed like at the time we just accepted it as great new music...no, i think yr right.

gone are the days.

Hmmmm... well, there was Chuck Eddy and his constant attempts to label and characterize it (remember "Pigfuck"?). At the time, most mainstream rock critics just ignored it - its interesting to see them rewrite their history today.

I do notice parallels between the mid'80s and today - but people - the bands, labels and the folks that write about it - are more sophisticated and seem determined to not repeat the mistakes of history.

Perhaps its as some have said - conservative politics reaps great rock and roll. And in the end, its all just rock and roll, which, so far as the time being is concerned is the beast that just won't die or resist reinvention.

Cheers and is Vinfindel some sort of new grape? An Italian Zin perhaps?

Sing the Troubled Beast/Bastro Diablo Guapo is out over here, in Japan. Came out a month ago on P-Vine.

On a related note, has anyone heard the last Squirrel Bait single on Ajax?

I'm pretty sure another Bastro/Albini connection is that Clark Johnson was briefly in the original Rapeman line-up...

This is excellent. Thanks for the post. As a Big Black/Rapeman/Shellac/Scratch Acid/Jesus Lizard fan...this will nicely find a home in my record collection.