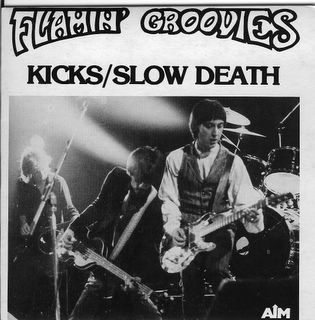 One of those 45s that I found in the Yesterday and Today bin decades ago that just sang to me even though I didn't know anything about the band at the time except that they had written "Slow Death" and "Shake Some Action" (one of the top songs of all time) and a lot of cool musicians would cite them in interviews. This turned out to be Flamin' Groovies (1966-1992), Revision 3.0 (mid-80s version), from an Australian recording studio take that ended up on One Night Stand. This is generally considered a fan club bootleg. The packaging is like a mini-LP hard cardboard stock with band photos on the front and back. The Groovies in case you didn't know, are one of the most greatest unknown bands. They started in the mid-60s with all the other San Francisco bands, mutated into a power-pop band in the 70s and then went to their roots in the '80s. To say that they inspired the mid-70's punks is pretty accurate, I suppose - Gizmos, Ramones, Dickies all owe a debt of gratitude to this under-appreciated band.

The only original members by the mid'80s are Cyril Jordan (co-writer of "Slow Death" with Roy Loney) and bassist George Alexander. "Kicks" - the a-side- is a so-so cover of an old Paul Revere and the Raiders song. It might suffer a bit from the "bootleg" sound quality.

The Flamin' Groovies are pretty much a half cover band anyway, so its appropriate to mix "Kicks" with "Slow Death". In fact, some would say after Roy Loney left, they were basically a Flamin' Groovies cover band but that's not nice - Cyril did a great job of keeping them together for so long and keeping them vital and non-sell-outy. At any rate, "Slow Death" was Loney's last song for the band and one of my favorites. I think I have about three different version of it not to count the cover versions from other bands. This is one of the better ones.

One Night Stand is widely available and worth picking up after you get the remastered Teenage Head.

All MP3s are limited time only meant to encourage discussion, interest and research into the subject. If original copyright holder objects, they will be removed post-haste.

Links:
Note: I'll be off the grid for a few days seeking a persistent vegetative state or something near enough... Cheers, all.
Posted by Jim H at 8:39 PM

AWESOME! Just awesome. Thanks (always) for the dose of SF!!! Much appreciated.

"Shake Some Action" is one of the great all-time FM classics. KSAN used to play it all the time back in the 70s... think that was a Dave Edmunds production, btw.

teenage head is a masterpiece. i think it was #1 lp in a few mags over sticky fingers in '71. flamingo was pretty good too. but the single of slow death/tallahassee lassie is up there with the best double sided singles of all time.
this site makes me wanna dig out my 45's.