Drunks With Guns (back by popular demand) 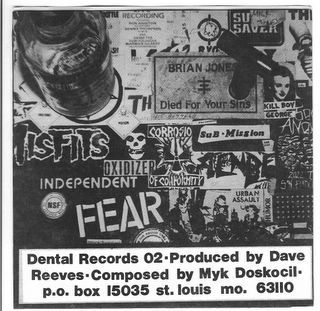 (photo of the back cover of Alter Human Industrial Fetishisms)

Well, maybe it's not by popular demand but someone on the previous thread asked for more Drunks so here it tis.

A St. Louis punk band that existed from the mid to late 80's, Drunks With Guns recorded Alter Human Industrial Fetishisms and from the discographies I have read, it was the second to last 7" under the second (and by far, the best) incarnation of the band. From what I have read, they only released 7"'ers and cassettes - although post-break-up, they later collected songs onto full length CDs or LPs. It's all so confusing - like the band.

I previously posted "Leprosy" with the assessment that it was the best cut on this 7" EP. But I take that back. Instead consider "Enemy," a tortured litany of all the peeps, things and Supreme Dieties that have converged on Mr. Doskocil to make his life miserable (this was before his bandmembers launched lawsuits against him, I guess). If you've ever spent time in humid St. Louis during the Summer (hell, for the Winter, Spring and Fall as well*), you can perhaps understand what he's going through. It starts and ends abruptly as if someone has pulled the plug on the whole enterprise.

"Zombie" is on the other side - it goes on too long for me (and that's only at 5 or so minutes) - perhaps this is a band only really suffered in short doses ...

Links:
Saved Round - Big Whoop! Exclusive:
This is a letter I received from Doskocil when I mail-ordered this single (click to enlarge) explaining the title of the EP and "news" of the next release. It has a signature in case you want to bother to analyze this alleged drug dealer's personality or whatever... The letter promises to put me on his "mailing list" - this, in true DWG fashion never happened...: 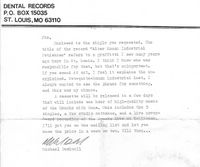 Greetings. Been following your blog for a while now (and had posted when you covered the Speed Trials LP). Ah, the old faves.

As far as I can tell, the Trouser Press DWG entry only covers noncassette releases by the "real" Drunks--anything featuring both Doskocil and Seitrich. Furthermore, I believe that Alter Human... is actually the final release on which both of those men perform (save compilation LPs and cassettes). It was allegedly issued by Myk, w/o his bandmates' approval. I suspect that the vocal track may have been recorded later on--note the inclusion of the line "Stan is my enemy!" on uh, "Enemy." I don't think Seitrich, Broyles, Broadhacker or DeLeon play on that "Drug Problem" single.

I am amazed that Doskocil's punctuation and grammar are fairly orderly in that letter he wrote to you. I suppose he must have actually been a reasonably intelligent--if terribly misguided--guy. Or at least literate. I would have expected more typos.

Thanks also for the link to that H Bomb site. Features No Trend. Another excellent band (early on as music, later on as fuck-you art statement), though misunderstood and absolutely loathed during its existence. Even Forced Exposure hated 'em.

Thanks for filling in the holes. Yes, the typewriter, my theory was that he had a girlfriend who typed - I mean I just had to make that up to keep the wild animal image.

Alter, etc.... has no other credits on it except for Doskocil so what you say is probalby true. The St. Louis Punk site talks the most about all the legal and band break up issues.

I interviewed No Trend way back for my fanzine - in a back room at Joe's Record Paradise. I kept on nervously eyeing the door as two of the NT'ers paced around me shouting out answers and peppering me with questions.

I interviewed No Trend, too. However, I'm too young to have been there at the time. It was a posthumous interview with most of the surviving members, done around the time of More's release.

What year did you interview them? One of the ex-guitarists is sort of a friend of mine. Did they say anything interesting at the time? Jeff, the singer, was quite guarded when we spoke, the others less so.

I interviewed them in the late '80s - around the time of the Tritonian album. Jeff was quite talkative -- remember that we were on his turf at Joe's -- and we discussed the proper color of stool and anecdotes from the road. I had a high opinion of the fact that he and the other leadin the band managed to get most of the group to come to the interview given that I was just a piddling little xerox fanzine.

I sold an extra copy of Bullets for Pussy 7" (one of Doskocil's post-DWG bands) to none other than . . .Doskocil. Actually he was fairly cordial in our email exchange and may have even left me positive feedback.

Bands like DWG and Brainbombs always leave me wondering how much of their image is really an act.

I know a lot of people from St. Louis, great people, but they all seem to be very angry people.

I hear a lot about DWG from some St. Louis rabid fans. I just don't get it (but I would love to hear the post/fake DWG band with the 12 year old girl)

A couple years ago I saw Strangulated Beatoffs play (one of the DWG guy's projects- I dunno their names). They are supposed to be very legendary audience baiters and they hadn't played in many years...it was a show to see! (all 50 of us thought so, anyway)

The show consisted of a couple TVs playing a loop of a black guy getting beat up (from some 70's movie) and them in the back, in the dark, twidding some knobs, occasionally yelling something like "I'm going to fuck you up" ala Whitehouse. It lasted 20 minutes...a very lame art-school attempt at baiting the audience. And they also had a ridiculous gaurantee.

The other DWG guy was at the show as well, passing out flyers proclaiming that his former bandmate was a child molester. Not knowing any of this DWG history, I thought it was quite hilarious (and still do, knowing the history)...I guess a fight was going to break out and the club kicked out the pamphleteer.

Speaking of baiting... weren't a couple of members of DWG associated with so-called joke band "White Pride" in the early 80's?

As far as I know, the only member of DWG in White Pride was Doskocil, who played drums in that group prior to DWG's formation. (He also drummed in the less-than-stellar Ultraman and Bootbeast during Drunks downtime. Maybe Theatre of Ice, too.)

White Pride was reportedly only half a joke. I dunno if it's true, but I once heard that the band split when the racist half realized that the smart-ass not-so-racist half (Doskocil and Jim, the singer) were just making fun. Again, I can't vouch for the validity of that. And supposedly one of the racist members (the guitarist or bassist?) was actually 1/4 blaack or 1/8 Chinese or something like that. Such confused youngsters.

White Pride released one tape during its existence, parts of which came out on a circa-1989 white vinyl 7" EP on Orphanage Records. The group's shining moment, entitled "Hoosiers are Niggers Turned Inside Out," however, was alas not included on the reissue.

As far as I know, the only member of DWG in White Pride was Doskocil, who played drums in that group prior to DWG's formation. (He also drummed in the less-than-stellar Ultraman and Bootbeast during Drunks downtime. Maybe Theatre of Ice, too.)

White Pride was reportedly only half a joke. I dunno if it's true, but I once heard that the band split when the racist half realized that the smart-ass not-so-racist half (Doskocil and Jim, the singer) were just making fun. Again, I can't vouch for the validity of that. And supposedly one of the racist members (the guitarist or bassist?) was actually 1/4 black or 1/8 Chinese or something like that. Such confused youngsters.

White Pride released one tape during its existence, parts of which came out on a circa-1989 white vinyl 7" EP on Orphanage Records. The group's shining moment, entitled "Hoosiers are Niggers Turned Inside Out," however, was alas not included on the reissue.

I believe the former lead singer of Theatre of Ice owns the Drunks With Guns domain. He and Doskocil were good friends. I think the two of them still plan to someday release a bunch of old material and upgrade the site.

This is Tom Noerper. I played in Drunks for a short time when Mike and Stan were both still in the band. I played guitar on the Drug Problem 7", after their split. Drug Problem is the last all-St. Louis line-up in Mike's version of DWG.

I'm the guy who passed out flyers at the Empty Bottle in Chicago, during a Strangulated Beatoffs show. I wanted to hype the band, and create a memory people wouldn't forget as easily. However, I didn't check it out with Stan and Fritz before hand, and I really did get kicked out of the club. It was just like old times.

Let's clear up a few things. Whatever his emotional issues, whatever crimes he may have committed, Mike is a brilliant, highly intelligent guy. Myself, I went from being a blue-collar kid who got kicked out of high school, to eventually graduating from Yale with an A-average - my view of Mike's intelligence has never changed.

The stories of Mike doing crazy and unusual things are all true - see the 1985 ish of "Forced Exposure" where they talk about him. It's not an act, nor a persona. It would take too much space to go on about this, but Mike and Stan are like the people in "News of the Weird," except that they make great records.

As for White Pride - the guitarist was Bob Leach. He died last year, only in his 40s. He was 1/2 Chinese. He and Mike and Mike the bassist are all properly liberal/progressive types who wanted to piss off the dogmatic, politically correct punks like Maximum Rock n Roll. They all hate the way WP is misused by stupid people who don't get the joke. They all have tried to separate themselves from that joke-gone-wrong. The band reflected the racist and segregated culture that surrounded them.

If you listen to the lyrics, it's clearly satirical.

"Punk rock has nothing to say/
Punk rock is all we can play."

Musically, it was some of the best hardcore ever done - as good as Bad Brains, Minor Threat, any of the best.

There are five important Drunks
recordings:

1st 7" I got the gun, bloodbath, punched in the head

LP - collection released by Stan that includes "wonderful subdivision," with Mike's vocal.
The original was black with no markings; an insert gave the song titles and had a picture of Japanese students with instruments.

Finally, Mike wrote some things in a St. Louis zine called "Head in a Milk Bottle."

Mike Doskocil played drums on one BOOTBEAST release -- the big 12" ep on red vinyl. He played drums on the THEATRE OF ICE 7" ep "It's All Over Now" and the albums "Lift" and "A Cool Dark Place to Die".