No Iron (or Vitamins), Man 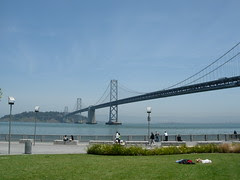 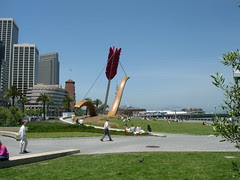 I feel like the anti-Iron Man or at least Smelted Down for Scrap Iron Man after one of those marathon cross country trips so the song below - an acoustic version of the great heavy metal standard from Four Tet seems to fit (it comes off this recent tribute record).

This time it was San Francisco but I did get some decompress time downtown - visited the Embarcaro (top two pictures), had some great food and beer and paid a pilgrimage to Aquarius Records (below). 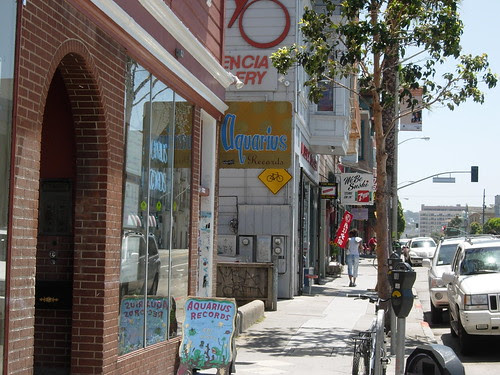 Poison Idea wins the Battle of the Bands competition. Jerry A and Tom Pig are still getting the love after all these years. Thanks for all the votes - there was a request for more Drunks with Guns and I'll work on that this weekend.

I'm going to see Spoon tonight and Malkmus tomorrow night which is a kind of record since I normally don't take in more than two shows a month much less one weekend. My Old Kentucky Blog has some songs from the new Malkmus record - recommended (best for headphone listening). It appears that the songs have been taken down - go to Matador for the one meager track ("Baby, C'Mon") that doesn't give you the full impression of this CD. They have a Spoon track but it too isn't really representative of their sound.

I'm also digging the new Smog record. Just the ticket for some further decompression.
Posted by Jim H at 7:23 PM

that "iron man" cover is fantastic (never liked the original myself). stephen malkmus isn't sounding too shabby, either.

I never liked the Official Ironman Rally Song either but yeah that Four Tet version hits a sweet spot - need ta get the record.

I'm the mail-order bitch at AQ.
Glad you liked the store!
I'll be checking you out more often and ORDER MORE RECORDS!!!
ha ha...

i recently posted a great cover of Iron Man on my blog by The Bad Plus:

if you get chance to have a listen