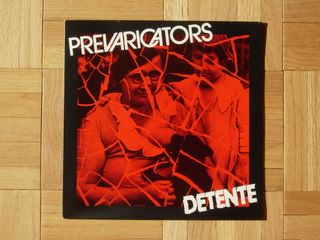 This collection of mostly garden variety hardcore comes from a little remembered Richmond, Va band and probably rightly so. Collectorscum.com's assessment is "OK hardcore, really nothing to complain about" and I guess that's about right - and given that there are plenty other bands in that subgenre that are worth checking out (see previous posts on Poison Idea and Big Boys), you would only have to be a total collector geek to want this - and even then they'd probably only take it for a pittance. (And I checked MXV and he doesn't fess up to owning any)

I bought this album on the heels of their previous single "Jihad" (a French import) which is remembered as a quite righteous skullcrushing hardcore screamer but was disappointed in the most part by Detente. But the Jukebox Jury is now out on that one as I haven't heard it in a while. I also remember people testifying about their previous album Snubculture but I haven't heard and Soulseek isn't turning up any rocks.

The cover shows a lady suckling what looks like a dog - apropros of nothing that I can tell (maybe its about a detente between man and the animal kingdom? - Richmond humor?) and I suppose that's par for course here.

Most of the songs are pretty much standard 2nd person accusatory hardcore (as in "you're safe within your plastic skin/you're an American mannequin" blah blah blah) mostly aimed at familiar targets - rockstars and betrayers, attempts at "humor" or political ranting- nuclear and religion-fueled wars are once again confirmed to be a bad thing.

The opener is a scorcher (in a manner of speaking) about the Rough Trade record distributors who apparently decided not to carry their previous record ("You're just a slut for money") - way to get back at 'em. One song ("Asente") proclaims that a friend shouldn't move to Philadelphia because its full of "queers and dykes". I dunno - I mean, consider the restaurants and Frank Sinatra kareoke nights. There's also a song or two with sax in it, so I suppose they were trying to think a little bit outside the lines.

So anyway, despite the rest of the album they do know enough about their punk history to have covered a Stooges song and I'm feeling generous enough to pass it on for your own assessment.

"I've Got A Right" - Prevaricators

You should have an actual (RIP) after Steve Hunter's name as he passed away six years ago.

Also, I believe the picture is of a bear cub. You can take that a number of ways. The woman can be raising something that will ultimately need to be gotten rid of, destroyed, or kill her. You can look at it because the kid licking his lips watching an animal get his mom's milk is hilarious.

Most epithets and slurs used by the band are making fun of the usages of those terms.

Your research is okay, but like they say... if you don't know... better ask somebody.

Alford Faulknier is still alive right? Did he move to NYC in the 90's and open a coffee house bookstore?

Alford Faulknier is alive and well. Sadly, Steve Hunter passed away about 6 or 7 years ago. Most of the songs are written with sarcasm, irony and humor. I suggest a little research before before posting "information".

Hey anonymous - maybe you should read my posting before you call it information! It's opinion. I recognize that they were going for sarcasm. Just not that good at it. Still, it's a great record so go pound in whatever.

I played on this record. Who the fuck are you? Some jacks hit who is easily disappointed? Fuck you. You are the judge of good sarcasm because.....you have a blog? Good for you , pussy.Steve Hunter was a genius.

I know this post is ancient, but I just saw it. Need to say that I saw this band once in 1986 and they opened for The Damned. If that's all they did, they would be pretty cool in my book. 👍😊

Not that anyone reads this "blog" - what the fuck is that? Found this looking for a copy to replace mine, lost> stolen?
Alford died a couple of years ago. He was quite the businessman, besides the stores, and bars; he built & sold houses. He finally found the love of his life, got married, and died of cancer not long after. Rest in Peace Al missing you daily.
Stover played in BEEX (!) and many other bands in RVA, still does.
> JP is right and they played with many bands of that note.
> Hunter was upset I never "dated" him. RIP Steve.