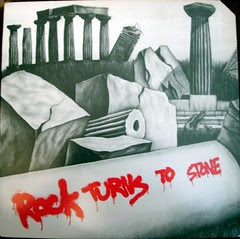 With a name like "Rock Turns to Stone", you'd think this collection of mid to late 80's New England bands would spell their Rock with a capital rock ... and you'd be right, rocker friend of mine.

While the majority of songs here are duds, the ones that click click hard as in bone rattlingly hard. Reference The Bags, not The Pixies. And not too surprisingly, almost all of the better cuts were recorded at Fort Apache (South) - historically, that makes this record important for future musicologists.

Vild Records apparently released this and a later record by Providence's Rash of Stabbings (their blase' cut on here seems calculated for major label attention) and then I can't find any further mention of Vild. Does anyone know if they had any other releases?

Stabbings, Rash Of (or just Rash) later turned up on Geffen Records and did their fair share of wasting large corporation dollars and further decreasing all credibility of Mr. David G... so we applaud them for that even as we withhold praise for their contribution to this LP. 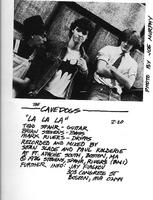 "La La La" - The Cavedogs went onto some reknown shortly after this. I believe they had a run of releases with Capitol Records. This power punk popper has me so happy I wanted to go out and trample some flowerbeds and throw spitballs at little ol' ladies. The Cavedogs are dead (well, not literally) but long live The Cavedogs - you can get all you need to know from this tribute site plus links to some of the former members current projects. See also a recent Mp3 blog posting on the Dogs courtesy Little Hits.

"Teenage Girls" - The Dogmatics. The tragic tale of this collection, the Dogmatics fell apart after losing their bass, Paul O'Halloran in an accident. Such a loss. This is a great unheard song- sorry for the record skip near the beginning. Originally recorded in 1986. Brett Milano on the 1995 Dogmatics reunion.

"Lunch With Ed" - Dog-zilla ...Most of the (good) cuts on this comp seem to be time-warped from 1979 and totally missed the whole SST/Homestead/Caroline Axis of Love revolution and certainly spurned Mission of Burma and the other art-rockers in Boston. As a collection, the Dogmatics, the Cavedogs and the Titatnics seem to be tailormade instead for Amphetamine Reptile, total retro guitar buzz rock. But someone snuck Licensed to Ill and King of Rock onto Dogzilla's turntable and they were never the same. Here they sing of what happens when you're a fuck up -- eventually you must pay the piper and have Lunch. With. Ed! Oh, if you click on the picture of Dog-Zilla, that's not just some random girl the guy on the right is leaning on - that's Andy MacGuire and she later played with Spoon for their Telephono debut.

"High On Drugs" - The Titanics. Formerly The Flies (authors of an early Homestead fave LP), they reformed somewhat as The Titantics and became a dirty psyche band. This song has a wicket fuzzy electric sitar and pays tribute to getting high. Fuck peace and love. The only song in this collection recorded in Fort Apache North (pre-Lou Giordano) which must have been brand new at that point.

Although not in the same class as the above, one track deserves honorable mention:

"Born Rude" - The Blackjacks - a failed attempt at trying to transform glam into punk. Singer / writer Johnny Angel (also of The Thrills and other bands) now writes about the lowlifes in the City of Angels. Here's the story of why he decided to quit music.

For the music librarians who have linked to this blog, here's the listing of all the bands and songs for posterity.

also... I wrote about the recent Bellafea show here.
Posted by Jim H at 8:56 PM

the kid who did this record Mark Melencaro was alright, a bit well shall we say very flaky. I used to host, WERS's Metrowave program(Sun nights, 3 hours all local music with a one hour set by a local band). Mr. Melencaro got the job of hosting, after I graduated and He got the honor of recording over the first Radio performance by The Pixes to tape another band, I believe it was Rash of Stabbings(not postive). We were all completly crushed by him using the reel that The Pixies were recorded on to record this or some other band. And it definetly gets the award for worst album cover EVER! By the way, it was so great to come to the blog and see The Dogmatics on the site. There was a band that had more energy then the Mats ever did and just as drunk.. Do you have the album they put out on Homestead?

Any chance of getting the Rash and Neutral Nation cuts posted? Both are bands from the RI scene of the late 80s. Being a RIer I'm trying to track down stuff from bands from this period. I vaguely remember playing this compilation in my freshman year on WRIU out of URI!
Thanks
ED

Thanks for posting the link to the Cavedogs site. I had been wanting to hear one of their songs again, but I only have Joyrides for Shut-Ins on cassette... so I went to the fan site, and there it was! 8-) jonhope

Interesting footnote, regarding the CaveDogs. Mark Rivers ended up writing the theme song to Dave Cross and Bob Odenkirk's show Mr.Show. And as a precursor appeared on WERS's Metrowave program while I was hosting and did a whole one hour radio program called "The Cave Dogs Funtime Hour" where Mr Show regulars David Cross, Jon Ennis provided a special musical comedy theatre about every Boston Radio Station with Cave Dogs providing the soundtrack. Where the oft qouted line "I'm going to paarty hardy and have a roast pork sandwich" comes from.

Wow, I'm pretty familiar will all of the bands here and never heard of this compilation. This is very much in the WMBR morning show vein (Late Riser's Club, Breakfast of Champions).

As far as the Turbines go, I've digitized both their LPs, the "Wah-Hey !" single, as well as two of the Throbbing Lobster compilations on which they and the Cavedogs appear. They were a great band.

Robert: By Turbines do you mean the Titanics? I hope I still have that Flies record.

Ultimoed - Not a chance since I didn't digitize Rash of Stabbings or Neutral Nation.

Marc - Thanks for all the background on the guy who put this comp together and Mark Rivers.

Jim, thanks for digging up the Boston stuff, your blog at the end of last year got me re-aquainted with my mates The Bags, I went on the road with them for their first US Tour and now bringing up good vibes with The Cave Dogs and the others on Rock turns to Stone. Your blog is great, and always look forward to a new entry.

hi there
where have the MP3s gone?
i would kill for a couple of those!

Dogzilla was a staple on WOFM-92 in Chesapeake, Va. in the mid 80's. I know 'cuz I played them especially "Lunch With Ed".

Marc Mel was a fellow DJ at WNHU at the U of New Haven. He was also a fraternity bro of mine. We lost touch after college daze. But he was kind enough to put my name and my girlfriends (at the time) on the record. He was a flighty dude and this was not the best LP but it took quite an effort none the less. He was Mgr. For Rash as well. This record is a keepah just for the Dogmatics cut! I miss the Grotto in New Haven!

Actually....A bit of correction...
First up, that recording over the Pixies tape (and as a fan of the Pixies, a iniquitous honor it would be...) never happened. That tape was stolen along with 10 other priceless recordings. It was the catalyst to a documented security installation to protect those tapes (only to have a good amount of them missing a few years later due to a broken lock). Only new tapes were opened for new recordings. Recorded tapes were filed in another room. Somewhere, there's a Pixies tape in someone's attic, next to a Warhol.

In regards to the album, a little history... it was a labor of love. And a financial sinkhole. It was originally slated to be released on a label called Monolyth Records. This explains the large M in the middle. In the 11th hour, the album was pulled so it could be pressed in a higher number and marketed wider. It was released under VILD Records (six releases, two legal infringement claims!). The artwork was already created, not what I wanted, and too late to change. Not the biggest problem. Affording it, bigger problem.

All artists kindly donated either original or requested songs for the album. Some (Titanics, Rash, Dogzilla, etc.) recorded songs specifically for the LP. Lou Giordano produced the Rash songs with Paul Q at Fort Apache. The spirit of the LP was to document the Boston music scene in that time, which it did. 2500 LP's were pressed and sold out all but one box in 5 months. ($25 on eBay!) All money generated went to further promote the bands. There's a great bootleg pressing in Australia (better cover, Marc). The LP received favorable press (remember, in the day) and each band benefited from airplay at college stations around the country, which was the goal. The cassette had two bonus songs. Flaky? (Ouch!) The more accurate term was learning. There was no one teaching this!. But that was then... what do I do now? Prevent legal infringement claims for feature films. Flaky paid off! Great blog.