When People Were Shorter and Lived Near The Water 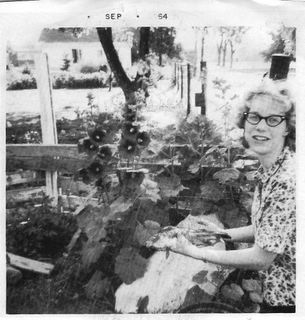 When People Were Shorter and Lived Near the Water sprung up in the late '80s in NYC to poke a little fun at music. Led by Kim Rancourt, the early modus operandi appeared to be to find a cheesy Top-40 AM radio hits and give it a snot spewing, spitting up punk rock treatment. Think The Dead Milkmen or A.O.D. but with slabs of squalling art-noise guitar and other sounds (Osterizers, yeah!). Later they did a more aclaimed rock version of Porgy and Bess on Shimmy Disc and a more tongue in cheek (yet still oddly respectful) album full of Bobby Goldsboro covers.

Three songs are covered: the mostly forgotten "Dandy" (Herman's Hermits) and "Danke Schoen" (the signature song of that Vegas schlockmeister Wayne Newton) make the first side the most enjoyable. Peter Noone is even given props in the liner notes for "special inspiration" and indeed the spirit of Noone's sarcastic personna infuses the record. The second side is not quite as good - sure there's the somewhat inspired version of The Association's "Never My Love" (you and I probably know it better as a Musak staple) and but then there's a tedious reading of the Gettysburg Address over a bed of mediocre mid-tempo rock. Keep the former, forget the latter.

My copy is signed by all the band members and I have no idea how I got my hands on this. I think I bought it at Yesterday and Today - no doubt enamored more by the band name and the cut-rate used bin price. 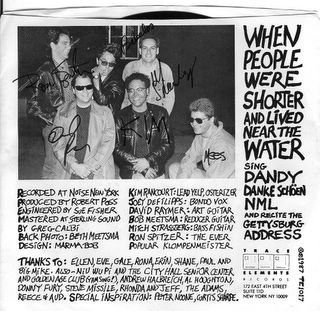 When People... had a sort of ongoing tie-in with some of the assorted NYC indie bands. Ron Spitzer, who played drums on this record, was also the drummer for Band of Susans and in one of the later albums, Robert Poss himself stepped up to play guitar. Later versions of the band included Dave Rick and Chris Xefos of King Missile. And you can imagine Kramer was probably somewhere in the background as well (this was recorded at Noise New York and Shimmy Disc became their later patron).

Kim Rancourt has remained a fixture in New York. He booked music for the Sideshows by the Seaside in Coney Island and has done several projects with Don Fleming (B.A.L.L., 1/2 Japanese). Most recently he (along with Fleming) organized the Vietnam Songbook which, in a burst of anti-war fervor, recreated songs from that war that no one seems to be able to get off their minds. Rancourt is currently playing with Fleming in a band called JFK - a cut of their appeared on the recent esopus magazine CD insert and previously played with Fleming and Jay Spiegel in Idlewild.

These are some good tracks. If you don't mind, I would like to link your site.

I have some tunes posted on my Blog as well.Check it out;
-----
SMALL BEDROOM//MP3 BLOG
http://small-bedroom.blogspot.com
-----

I like that Danke Schoen track, Jim, pretty bitchin. Thanks.

Some funny stuff. I was always intrigued by the name but never came across any of their stuff. Now I have closure.

I love these guys, I discovered them for myself many years ago off a Shimmy Disc video tape that I still have some where