Vox Pop: The Band The Myth The Volume 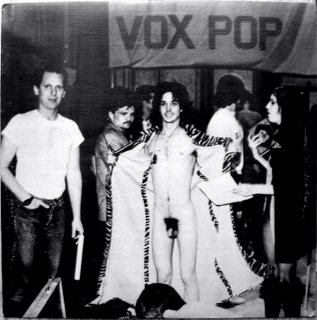 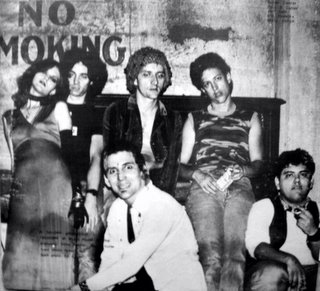 Band (from left to right - not verified):
There's little documented about this L.A. band. I believe they were active in the timeframe of 1978-1980 and preceded and perhaps overlapped a little with 45 Grave to which three of the members eventually ended up. They are most famous as a footnote to The Germs story in that this band is often cited as the reason Darby Crash kicked Don Bolles (Germs drummer) out of the band. More on that below.

I don't have a discography but apparently they released two (?) singles at least one on the same label that released some Angry Samoans (Bad Trip Records). The front cover photo of this record has Dinah Cancer holding what looks to be a 7" record (that's Paul B. Cutler providing the full frontal nudity and I think that's Jeff Dahl standing in shock to left). I am not sure whether this posthumous Mystic(!) release (1982) contains the singles or was previously unpublished material. I'm guessing buried deep in some old fanzines in my archive, one can probably put together a more fuller story. At any rate,there is some information about this band scattered all over the Internet, so I thought I would, in the tradition of Lexicon Devil and Please Kill Me, put together an oral history of the band.

If you have any remembrances of the band or can talk with intelligence about the provenance of this record or their other releases, please add comments...

An Oral History of Vox Pop:

From Flipside history of .45 Grave; Author Unknown: Don and Paul [are] from Phoenix and Dinah is from Los Angeles. ... Paul was in Phoenix in a band called ‚Turquoise Orchestra, the jazz version of Vox Pop. Don was playing in Krazy Homicide but since they weren't very active decided to take up drums and join The Exterminators with Rob [Graves - later in 45 Grave but not in Vox Pop - ed]. At about this time, the Consumers - a local Phoenix band Paul was in, Don and Rob all moved to Hollywood - right into the Canterbury Arms luxury apartments. The Consumers, among others practiced in the basement - that's where Don met Dinah [two hearts in the original text]! The Consumers didn't last long, and Don was offered many drumming jobs - he chose the Germs and The Skulls. The Germs finally got around to auditioning Don in The Masque bathroom and after much deliberation... Don was a Germ.

Flipside: Jeff Doll [Dahl - sic] the guy with the big red afro called up Don one day looking for a girl, he and Don talked and found they both liked Blue Cheer, so Jeff brought some live tapes over to Don but they ended up in the studio making noise. Jeff needed a band to play his songs and he already had a gig booked at Kings Palace. So they came up with a total meaningless name - Vox Pop. Paul was in it cause he was there, Dinah joined later cause she had always sung - "occasionally unis [? - editor] on vocals", Mike Ochoa joined cause "he was a weird guy with a synthesizer" and Del because they needed a drummer. Everyone wanted to play lead guitar. They ended up playing about 7 times and some guy liked them enough to put out their single on Bad Trip Records. At one show Mugger from H.B. [? - is this Mugger from Nig Heist - editor] got up on stage and sang "Fuck me in the wenny" to the tune of "Louie, Louie" and Vox Pop got another song... [Flipside, 1980 - http://vereine.rol3.com/Plasmatics/private/bands/45grartc.htm]

Don Bolles: Vox Pop was a big band in that there were like seven people in it, and one of them was kinda fat. So it was big that way, but really we couldn't pay people to go to our shows. People did not wanna go see someone being like Flipper-meets-Runaways-and-Faust. [Mark Prindle interview, 2004)

Paul B. Cutler: I had known Don and Rob from Phoenix and Dinah was Don's girlfriend. We had nothing better to do, so we started a band. [interview by Pat Thomas BOB Magazine; 1987 published on Steve Wynne's website]

Brad Duff: Vox Pop was basically 45 Grave with everyone switched around on instruments, plus Mikey Borens (I think) and Jeff Dahl, a couple other people (even me) were in and out of the band. [Dig It Fanzine; date unclear]

Nicole Panter (Germs Manager): Don Bolles wore dresses and make-up [in Vox Pop]. And Darby [Crash] was mortified: He'd get on Don's case, "People are gonna make fun of us if they see you like that." Darby was not an ironist. He was too deep in his own shit to see irony. - Lexicon Devil: The Fast Times and Short Life of Darby Crash, 2002

Barry Spradling: Don Bolles came walking past us with a striking feminine make up job on his face, and what appeared to be a fifties style police uniform. My poor straight friend stopped Don and said "hello!" thinking he was a girl, and Don replied "Hi!" back to him in a manly tone. "[via via Gerardo Velasquez tribute page - the Darby Crash biography has a picture of Bolles in Policewoman drag]

Don Bolles: Well, I still kinda do that. I look fuckin' hot in drag! I have this whole teenage rock star body even though I'm almost 50 years old. [Mark Prindle interview, 2004 - editors note: see for yourself whether Don Bolles still has a rock star body - that's him second from the left, picture taken in 2005]

Pat Smear (Germs): The fact that Don wore a dress was like, whatever, that wasn't it, I don't think -- it was that he was in a fucking joke band. I mean, you're in the most serious band in town. How can you be in a fucking joke band? -[Lexicon Devil, The Fast Times and Short Life of Darby Crash, 2002]

Jeff MacDonald (Redd Kross): I thought Vox Pop was fantastic! They weren't a "joke" to me -- at the time they were one of the only decent bands in town. I saw some incredible Vox Pop shows -- twice when I saw them Paul Cutler was nude. It was total rock and roll! [ Lexicon Devil, The Fast Times and Short Life of Darby Crash]

Paul B. Cutler: I would like to find a way to promote violent revolution in the streets and towns of America and until I do, there will be no Paul B. Cutler LP. That was, and will remain, my long-term goal. After all, why kill someone poor when you can kill someone rich ? You can't own something if it burned to the ground. [interview by Pat Thomas, BOB Magazine; 1987 published on Steve Wynne's website]

Jeff Dahl: 'kay, here's a strange one that came outta of the blue! I just had an email from a pal in LA telling me that there is a movie currently in production about the seminal LA punk band, The Germs. It's called What We Do Is Secret and I have no idea when it is supposed to be out in theaters or on DVD or on cable or whatever. I guess it's an actual legit movie coz it's starring Lucas Hass, Bijou Phillips and Shane West. Okay, I think it's weird that they're making a movie on The Germs to begin with but here's where it gets really nutty. As you may or may not know, at the time of The Germs, their drummer, Don Bolles, was also in a band called Vox Pop with me. I played guitar, I sang some of the songs and I did tons of illicit substances. Germs singer/martyr, Darby Crash, saw us once and pronounced us the worst band in the world, though he might have actually said we were the worst band in history. God knows we tried. Anyway, some friends who have been on the set during filming have said there is actually a scene in it where Vox Pop is playing a show! Which means that some poor actor type is playing me in a movie. I dunno whether to be flattered or amused or confused by the whole idea? Imagine going to see a movie where someone is playing you? Even a small scene or bit part ... kinda creepy, huh? If you had told me, in 1980, when we were stoned, drunk and porking anything that would allow us, that in 2005 there would be a movie about this stuff I would have laughed in your face... F'n hilarious. Whatta world... [via Jeff's website - date unknown but recent]
Songs/Commentary:

Jeff Dahl had another band right around the same time as Vox Pop called Powertrip. A single and a full-lenght were released. Band also from L.A. Something of a proto-thrash metal/punk group, just pre-dating the whole US movement spawned by the NWOBHM.

You should link to the full size photo:

Thanks Anonymous - I fixed the link.

Vox Pop put out one 7" (Cab Driver/Just Like Your MoM) on Bad Trip Records and then this Mystic 12" and that was it aside from a track on a compilation (one of those "Life is..." comps). If memory serves, Vox Pop didn't predate 45 Grave, they happened at nearly the same time.

That 12" is eventually going to get reissued on some sort of Mystic CD later this year.

Just so's you know - Paul Bolles is an author (albeit with a different spelling) -- DON Bolles was the drummer in Vox Pop, Germs etc. Thanks for the great post.

Thanks Jay - it is fixed. I called Don an author because he is listed as a "contributor" to the Lexicon Devil book.

There is a live Vox Pop on KPFK cd/lp that came out in the 90's. Worth tracking down.

I need a Vox Pop mp3 called 'Just Like Your Mom' please send it to ian_england@msn.com and check my site out at www.generationpunk.com

On the front cover photo, the person exposing his wiener is Don Bolles. The surprised looking gentleman is the late Craig Lee of the Bags. This photo was taken the night Voxpop opened for Throbbing Gristle in Los Angeles. This photo was chosen because everyone was mad at Don for not showing up at a band meeting to discuss Album art.

I was a “permanent live guest performer” with Voxpop, and was the 2nd synthesizer player along with Michael Ochoa. We still play together in Nervous Gender.

On the front cover photo, the person exposing his wiener is Don Bolles. The surprised looking gentleman is the late Craig Lee of the Bags. This photo was taken the night Voxpop opened for Throbbing Gristle in Los Angeles. This photo was chosen because everyone was mad at Don for not showing up at a band meeting to discuss Album art.

I was a “permanent live guest performer” with Voxpop, and was the 2nd synthesizer player along with Michael Ochoa. We still play together in Nervous Gender.

any way you could upload these again?

Joe Z., I was in Zoo Station with you and you also created some computer-driven music I liked.

Vox Pop did play at the time 45 Grave did. They also did work on a film they were planning to make, shooting on stage and backstage at the Whisky. It would be pretty interesting to track down that footage now. Dinah Cancer and another girl having fun with a giant crucifix.

Vox Pop did play at the time 45 Grave did. They also did work on a film they were planning to make, shooting on stage and backstage at the Whisky. It would be pretty interesting to track down that footage now. Dinah Cancer and another girl having fun with a giant crucifix.