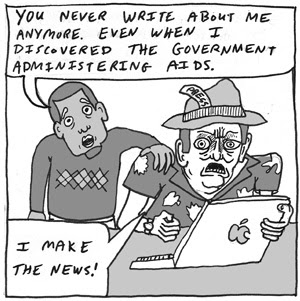 Some mea culpas from the last posting - there were several essential blogs I left off and I have yet to throw into my blogroll. One is Nick Sylvester's RiffMarket which has been just plain Jesusbreath in the past few weeks doing his Year In Riffs - with all his lil' buddies contributing hilarious write-ups about the year that was. The above is a frame from Farley Katz's comic strip about Kanye and Drudge living togther. Go here to read the whole thang. Other highlights are Sylvester's year-end riffage -- which I'm guessing he didn't construct in 35 minutes -- but I'm waiting for the next great novel to come outta this boy's hands (despite that Warlocks review, you, you asstripe!). And don't miss Danny Chun slaying Zach Braff:

But it's not these LA hipster icons I'm here to find either. The man I seek is off by himself in a corner, clearly intoxicated -- not with alcohol, but with music. So with a reverent wave, I approach Zach Braff. He holds up a finger to silence me as he listens to his iPod. After 20 seconds of what can only be described as intense grooving, he removes the headphones.

"Sorry -- I was just listening to this great new artist called Cat Power. I discovered her out of nowhere when she did a 40-minute set on KCRW followed by 2 Amoeba in-stores. But pretty soon she won't be just my little secret anymore." He is referring to Cat Power's inclusion on his soundtrack to Staring At Nothing, his latest movie, which stars Braff, Scarlett Johannson, Jessica Biel, Keira Knightley, Jessica Alba, Anne Hathaway, and Dustin Hoffman.

"It's about how strange this thing we call life can be," explains Braff. "Like in one scene my character meets a guy who walks around covered in bees. And there's a guy who only talks in Pig Latin. And a guy whose guts are all on the outside of his body. And a guy who lives in a trash can like Oscar the Grouch. And -- spoiler alert -- the ending is that my character meets a guy who walks around with chopsticks up his nose. That's when he learns that sometimes love is just a four-letter bed where your heart sleeps."

Yeah, easy target but one deserving of a couple more pokes than he has given us. I used to kinda like Scrubs in that sorta hate-Zach-but-like-the-supporting-cast kinda way but, man, it's become like a "Very Special Episode of Scrubs" almost every night now.

Another blog that I've given homage to in the past just deserves to be in everyone's RSS feed and that's Siltblog. Major props by the way I guess to Times New Viking for getting a leg up with Matador signage. I hope they totally destroy rock and roll and the label in the process. Fuck h'yah.

Some more random rubber-necking on the Information Super-HI-YAH!-way:

- Defuck Australia and the one-legged sphlyitic kangaroo their bewigged judiciary and asshole lawyers rode in on.
- And while I'm getting all he-man blogging in my underwear, defuck Myspace. What a fucking crawl you go through just to log-in and post a comment on some band's worthless blog. I swear it took me thirty minutes to do that. What's funny is that at work the company that provides their filesystem and "storage solution" has been marketing me and I totally shut them down. PROPS! And then there's this.
- And now for some other PROPERS. Black Flag unreleased cassette with the Rollins/Ginn/Dukowski/Dez/Biscuits line-up. Slobber, slobber.
- Mountain Goats: Thanks for the new song.
- Aberdeen City countrifies Low's Christmas song. Now can Low do a cover from the band called Christmas - that would be boss.
- The lost and probably censored Ren and Stimpy cartoon
- Josh Feit re-deconstructs the Kim Gordon - Chuck D "Kool Thing" banter - turns out Chuck was the Kool Thing, not Kim. Huh... and here all along I never really gave a shit.
- Aw man, this will make like an awesome mix CD -- WFMU's Make Your Own Alternative Jesus Christ Superstar (although as a Catholic, I have to point out to Station Manager Ken that this would probably be something you post at Easter, not Christmas...). But whatever, as I never knew Cuz did a cover of "What's The Buzz"
- Now for some eddication, the author of The Physics of The Buffyverse writes a nifty science posting on Mayan acoustic archeology on Three Quarks.
- Another melancholy Christmas mix at I Guess I'm Floating

And finally, remember, sometimes love is just a four letter bed where your heart sleeps...
Posted by Jim H at 6:36 PM