This ain't no bartending blog, but... 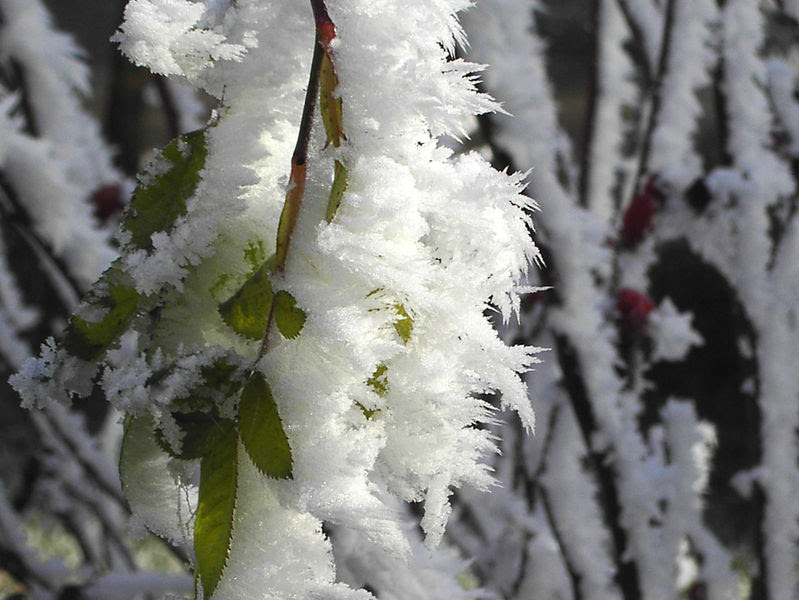 Here's a very little known winter-Christmas drink recipe via my grandfather, who died this year, which he brought from Old Europe:

RAUREIF
(the above is updated from an earlier posting)

Mix with a small amount of crushed ice to dilute and refridgerate until ready to serve.

Strain the crushed ice out when serving.

In fact this last step is really what, besides its bite, gives Raureif its name as the crystals represent the strange ice growths, I suppose (see below for explanation).

This drink can be served early in the day prior to dinner. Warning, it packs a punch as you might guess.

Learning Annex: The Germans have a word for everything even rarely and often bizarrely formed resublimated water vapour... via Wikipedia:

Raureif is a firm precipitation, which forms directly from the water vapour contained in air by Resublimation. For this a very high relative air humidity of over 90% and an air temperature of under -8 are necessary °C. The developing warmth is transferred thereby by convection to surrounding air, in addition, therefore wind increases the formation of Raureif, may not be to strong, in order not to destroy the sensitive structures. Particularly needle-shaped ice crystals in form of sechsstrahliger dendrites against the wind direction, which can to achieve a substantial size and bizarre forms and to grow usually only slowly, develop. Raureif "grows"against the wind, since luff-laterally arriving air possesses a higher humidity than in the Lee. The phenomenon of the emergence of Raureif arises comparatively rarely and with hoar frost or Raufrost is often confounded, for which it represents a kind of provisional stage. A special form of the Raureifs are ice flowers.

This definitely sounds dangerous enough for me. I will try this recipe out just before dinner at New Years eve. I think that it will a good sort of kick off thing.
:-)

Ah! Well, it was very successful. The drink was highly enjoyable. And a very good starter.
And - o yeah - we got drunk. But I am not saying that was the Raureif's fault. It was more the fault of gin tonic's later on.
:-)

Glad to hear it worked out. Yeah, I think because of the triple sec and sugar it really is a daytime - "kick off" drink.