The Top 14 Best (Audio) Blogs of The Here and Now

When I go out and look at what are supposed to be the "top" Mp3 blogs, I usually get green - not with envy but with nausa, so I need a good tonic to show there really are some other people out there that care, have new ideas, not all about maximizing advertisement income, aren't cynically trying to break into the Biz, boost their fragile egos or get on the promo "gravy" train.

To me, these are the real competition... enjoy finding some new friends. (Please note to all those on my blogroll, I rilly rove you guys but one of my criteria in this exercise was to go outside the 'roll for some new links)... 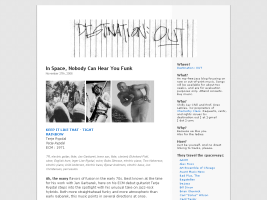 Destination: Out (rss) -- a two most knowledgable cats that you oughta know -- especially if you're tired of that same old indie and want to dip your toe into that fire and brimstone and sweetness and light that is free jazz.

Bumrocks (rss) -- this is an old-timer that I had forgotten about and this year rediscovered. No blithering aspiring ad copy or lame sophmore creative writing class puke - just a song per day to check out. If you like the band or cut, you're on your own to find out more as he doesn't provide links to bands or albums - but isn't that what makes the internet so much fun? 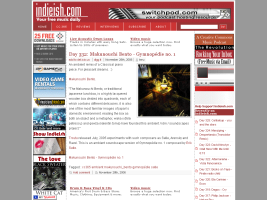 Indieish (rss) - Normally, my strict criteria would eliminate anybody who has "indie" in their blog title but we'll make an exception for this guy. His deal is that he only posts music from bands that have signed up to the Creative Commons licsense thereby keeping himself legal, not having to go ask permissions AND also putting himself out the mainstream/lamestream of most "indie" blogs. And yet, there's an awesome amount of good tunage in the commons. He's up to Day 344 so you could spend for like ever going through this one cuz the links rarely expire.

Jacob Sudol (rss) - Ever wonder what a blog might be like if a modern classical composer did one? Well, it ain't too bad 'specially if you're willing to open up your ears to some new and interesting sounds. Who knew that a contrabassoon could sound like bowed gongs, huh? Huh?

jefitoblog (rss) - A kind of ongoing mockery of the cheesy side of 70's and 80's that has some sort of relationship with this blog. If you read one, you get inside jokes on the other. Not that I have the time to do that but nostalgia is one bitch that is seductive and you hate yourself (in a good way) for clicking on the Bishmas record or the old Hall and Oates Jingle Bell Rock video. I guess during the rest of the year it's a more conventional albeit snarky music blog.

KinoSport (rss) - The upshot of this one is that the person who writes it travels alot and photographs alot. Beautiful photographs. Unlike most music blogs which read like high school try-out essays for internships at record labels, the entries actually read like a personal diary type blog - either interesting observations or random discourse on cigarettes and junk like that. The music is generally electronic house or clash (or is it techno? whatever) , so eh on that, but worth a listen or two just to confirm that I'm not missing anything by ignoring techno.

My Heart Is Made of Gravy (rss) - Like the Kinosport travel-photo-music hybrid above, Gravy Heart here takes his often funny doodles and finds a song that exactly fits the mood or subject. Unfortunately, he hasn't posted for a month -- so maybe this attaboy will give him some motivation to come back.

Old Blue Bus - If you like where Jack Rose is coming from or some of the Appalachia aspects of Ms. Newsom, you might be interested in checking Old Blue Bus out since they're into the "real thing". It's old timey and bluegrass and quite active. Believe it or not, 2006 was a good year for Old Time music according to the Bus. Not sure what the rss is but Google Reader had no problem swallowing it.

White Noise Revisited - Shoeglazer pop rock electro melodic -- oh kay pretty damn eclectic UKie blog that has introduced me to a couple acts I might have normally ignored. I couldn't figure out the RSS but Google Reader had no problem.

Boring Machines Disturbs Sleep (rss) - Another UK blog that is the best of the "indie" blogs - and trust me there are many, many out there. It's got a real fanzine feel, loyalty to the bands it loves and not afraid to go out on a limb with a CD that might not be on the "Cool List". It's a bit sparse on the MP3 front as they don't own any dedicated download space but that's okay. 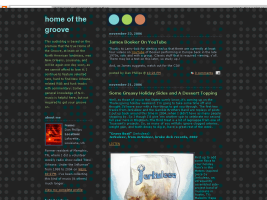 Home of the Groove - Downhome New Orleans music blog. Learn your history here and catch some great funk blues jazz from the Big Easy. Rss is working - just don't ask me what it is.

A Beef Sandwich w/ Sweet and Hot Peppers (rss)- This is more of an honorable mention because every Saturday the proprietor of this blog digs up an old Sammy Davis, Jr. video on YouTube and that's just too damn cool not to give 'em props for.

Disquiet.com (rss)- Alas, there aren't enough noise and experimental music blogs out there. But there' s Disquiet. Usually a few weeks ahead of The Wire.

The Trust Fund (rss) - Some Pitchfork / Dusted / Stylus reviewers you love to hate have their own blog so you can go and hate on them there, too. The thing is, they can actually write and it's so refreshing to see professionally strung together sentences in a music blog. I'm not saying this is a prerequisite for a good blog, just that the English language can be enjoyable when it's wielded by practiced hands, if that makes any sense. Also refreshing that they aren't out chasing the latest whatever buzz or whatever. Cute and telling name, though.


This posting made possible by Hype Machine's massive blog list...
Posted by Jim H at 8:36 PM

Hey, thanks for the blove! Just so we're clear, though, I'm not *always* about the '70s and '80s, and not *always* so heavily connected with Jason's site. It's just these past couple of weeks. Stick around into the New Year and you'll get a better idea of what Jefitoblog is all about!

there are 2 dudes working wonders on destination: out, however. 2 wonderful dudes.

And one of the two Dest:OUT dudes is here to say many MANY thanks for the shout-out. We're really trying to reach beyond the jazz nerd crowd, and your mention might just help us reach, y'know, a different kind of nerd. Really appreciate the nod. Happy, merry, and all that.

A really interesting list, Jim. I check in with Old Blue Bus from time to time and love White Noise Revisited. I'm glad that when SVC closed down Joe kept something going in the same spirit. Kinosport is fantastic! Thanks for introducing me to that.

I am completely flattered you have included the Boring Machines blog here.

The mp3 thing is something I'm keen to sort out asap.