The Exploited: Death Before Dishonour 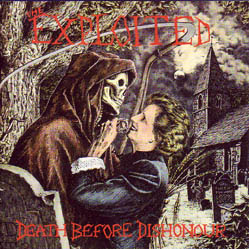 With all the loathsome Christmas music being pushed on blogs this week (although I suppose it's just as loathsome as what they were pushing last week), I need a fucking break, so let's pull out some old unrelenting and unapologetic punk.

In the 80's, my job took me all around the country and it seemed every punk venue I visited had at least one kid with the serious Wattie worship -- the beautifully handmade/mutilated leather jacket with The Exploited and the skull mohawk logo --- oh and the kid would have a rooster-mohawk too. The band seemed to have a good but loyal following but I never really got on the bandwagon. Course I never saw them live so maybe that might have been a clincher.

Although the politics that framed this record has gone kind of stale, there's still a couple keepers here -- as with lots of 'core of the time, the anger is directed outwards towards that mythical "they" but even so, it's a coincidence that all three of my favorite songs are "They" songs.

"Drive Me Insane" - is a good and still pretty current roar of anger against, well, all the crap that drives you insane. This would be great for an anti-Christmas Music mix tape.

"They Don't Really Care" shows the band flirting with the Great Metalwhore that destroyed so many other good bands and they come out of it still full of stink but looking good enough. There's guitar solos and a stab at a lazy marching drum break. But I like it for the nostalgic twinge I get every time I hear Wattie scream, "Maggie, ya fuckin' cunt."

"Anti-UK" is great for bedroom slamdancing - anger can be exhilarating. I have no real idea what it's about -- I'm guessing Wattie's mad that he, a former soldier, is being called "Anti-UK" when the politicians (there's that "they" again) with their "pre-election lies" are the real anti-UK ones. Mmm'kay?

Band line-up (one of hundreds, it seems):

Wait a sec... am I in a political band that parties or a party band that politicizes?
Exploited Links:
The Exploited's Official Web page -- they (or should I say Wattie) are still alive and kicking and just finished a small Contintental Europe tour which included Russia and Turkey.

Although, as usual Wikipedia offers a much better summation of the band than a band's official web page including a full discography and band member history.

In case you care, Wattie now sports a dreadlocked Mohawk, still orange. Not sure if that qualifies as a comb-over.

The punk cognoscenti, when you mentioned The Exploited, sneer and say that only their early 7"ers are good - that these later LPs were Combat Rock schlock. In order to forestall those potential comments in this here blog, those 7"ers are still mostly available in vinyl.
Posted by Jim H at 9:47 AM