From the Vinyl Mine: 7 Seconds 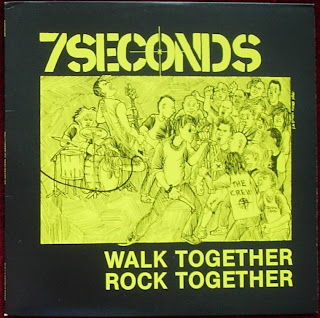 In my mind, 7 Seconds were the kings of the high school punk anthem in the '80s even if very few high school kids ever heard of them. I remember being at a big party several years ago in which a prominent politician (Democrat if you must know) was present. When it came time to offer toasts and make speeches, he had the audience cheering and yelling and yet when I later thought about what he said, it was pretty much, well, nothing - he just made everyone feel good about themselves.

If you look too closely at songs like the scene unity rocker "Walk Together, Rock Together" you start finding yourself taking it apart too much and not just enjoy the fine hooky chorus and neck flexing verse. I won't bore you with a deconstruction but if you ask yourself the song's central question, you can find about a hundred reasons to say no. But it's so damn hooky that I woke up at 2AM today with the chorus playing in an inifite loop earworm - I had to sing "Can't Touch This" to myself (that's my number one "earworm" song previously) to get it out.

If there's anything I didn't like about this record, though, it's the drummer who did stupid shit like cowbell fills - totally destroys their otherwise rousing cover of "99 Luftballoons" (also their biggest download on iTunes and what they're most known for) . He also occasionally slows down and speeds up - I'm sure he's gotten much better since and as a drummer, perhaps I'm overly critical.

"In Your Face" was their little tribute, I guess, to the guy who produced this record - one Ian "that's pronounced Mak-Ky'" MacKaye - picks up the Minor Threat gauntlet quite well.

Some of the other songs go a little bit overboard with the Positive Youth Politics - "Remains to Be Seen" - their band origin song, sounds like a party manual:

"And through the years our anger went /
toward more progressive goals /.../
Our main goal is to better ways /
And help communication/
With our positive commitment"

Ooookay. ... however when Kevin concentrates on the hooks and anthems -- and keeps the lyrics simple and raw - such as "In Your Face" -- you can't really argue with him.

These songs are available on a CD that compiled these tracks with several compilation songs - including some other classic anthems - "We're Gonna Fight" and "Regress No Way" - this can also be found on the major download services.

Band photo below is sort of a fashion-don't statement and since I was never very fashionable, I'm not trying to mock them but... between Kevin Second's famous "handmade white T-shirt as sweater vest" fashion statement and surfer dude-tool drummer, well I'll just shut my effing mouth now before one of their fans tells me to. And I'm not gonna say anything about the half-haircut guy Dan Pozniak (who only played with them from '83-'85)- he looks too much like Travis Bickle. You can look at latest pictures of Kev, Steve and Troy here. 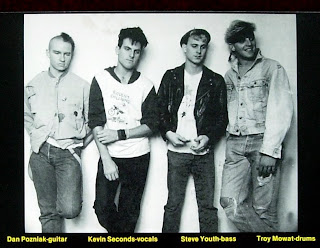 I love this album. My cover is purple instead of yellow though--is yours an earlier pressing?

I've never seen the purple cover but I'm pretty sure I got this soon after it came out. The cover drawing is by Brian Walsby who has scads of his rock comics online. Check out the Ryan Adams and Pushead pages.

There's also an interesting mispress of "Rock Together" that circulated with only one side (probably two A-sides) pressed into both sides of the 12".

I saw a copy back in the '80s, but a friend of mine who was with me at the record store grabbed the copy and bought it before I could.

He even had the balls to show the mispress to the clerk, and ask for a discount (as a joke) because the record was messed up! He's lucky the clerk didn't snatch the record back and say, "Nah, we're keeping this."

yes ma...did you ever go to the deli and order some sliced deli meats? Frequently, the deli meat is in a roll that is then sliced for your order. The deli meat is in a "casing". The casing is sometimes some edible rubbery stuff. Anywayz, one day after eating some fresh deli meats, I had an upset stomach. I went to take a crap and noticed something ticklish in my butthole. I pulled on it with my two fingers. Basically, it was like pulling a ribbon out of my ass. The deli casing was undigested by my gut. It was like a paper string covered with feces. Hope you like this posting!Note - The cheapest option is shaving your head with an actual net saving due to no expense for shampoos, conditioners, combs, brushes, or hair stylist. Of course, with this option you get no hair. Note: My Feet smell like rotting garbage in the summertime. Also, after intercourse, we throw each other's underwear at each other in reward for a job well done. In college, there was a girl known as the "Shitter". During anal intercourse, she shat all over the sheets. It was a mix of b.m. and blood. Apparently, during anal penetration she bled. That's how AIDS gets transmitted, so I'm told. A variety of shit comes out of different assholes. I get boners for men. Waxmen. Waxwings. Earwig. Only For The Weak.