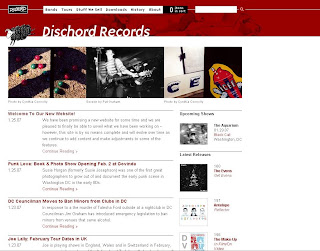 Dischord Records discovered that the year 2001 was over and updated their website. I can't fault them for waiting so long - the label has always been a labor of love and who has time for computer shit when there's music to be made.

- downloads! A HUGE amount of downloads from the entire catalog (even the 25 year old stuff). There's also a promise to bring in videos and stuff from the archives. This is really the most exciting thing about the new site. They made it so you can't "hotlink" to an mp3 or download (you have to right click on the flash arrow thingie to download - something they don't tell you about unless you experiment).
- clean and simple design wins the day
- they've kept the band pages pretty much the way they were and as I had no complaint about it (except perhaps they should have links to MP3s), that's an upside

Downsides - as they say here, this is a work in progress so take this as constructive criticism

- the store which was hard to deal with before now seems totally inoperable. Stuff you select for your shopping cart doesn't get in there (I'm using Firefox so maybe this works with other browsers). CORRECTION: Whatever the problem was - whether it was on my end or theirs, it's fixed now and I justed busted my budget on some Evens CDs... kidding, $10 each and free shipping - sweet.

There's no email links on the store page to make a manual order (there is a street address and phone number though). There is an email address for them but it's kinda hidden. Really, I know you guys see commerce as being icky but we want to buy your records at your great prices - make it easier for us.
- I hope they are planning to sell DRM-free digital (loss less or high bit rate Mp3s, please)
- no RSS feed for the news page - boo. Really, this is 2007. I want new announcements to come to me not have me have to go to their page. That can't be too hard to fix.
- the tour page is great and it does offer a way to subscribe but it's with icalendar?! Not a bad idea for the band manager and real fanatic fans but most people don't need to know when The Evens are going to be in Pittsburgh (unless you're in Pittsburgh). Wouldn't it be cooler if new tour announcements was also delivered to an RSS reader? Bloggers who love you guys would get the word out. And yeah, I know publicity and advertising is icky, too.

Well, this wouldn't be an MP3 blog with something I plucked from their download page. Embrace was a band I wished had stayed together longer but it was not to be. Viva la Revolucion Summer. I got to see them live at least and somewhere I have a soundboard tape.

I'm loving the new site, but I haven't actually ordered from it yet. Soon. I love the fact that I can sort the catalog based on Label, media-type, artist, etc. My only minor complaint is that the prices aren't listed until you put the item in your cart.

As for DRM-free downloads, I think the entire catalog (including some out-of-print stuff) is available on e-music.

When in doubt, send an email to dischord@dischord.com.