From The Vinyl Mine: The Ordinaires 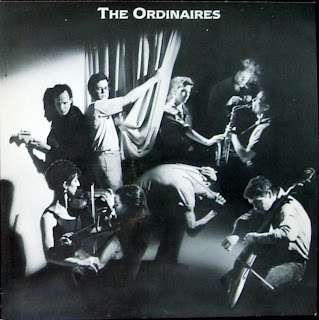 The Ordinaires were a 9-piece chamber rock-jazz (world-funk-punk-prog,etc) unit (reeds, strings, guitars, drums) that emerged from the No Wave scene in the mid-80's. Their bio says "the band was both an outgrowth of and a reaction against the shapeless dissonance of their peers." Peers being Mofungo, The Scene is Now and so on.

There's alot of love and sweat put into this album - this isn't some one-off improv or 3-chord punk thing - although most of the pieces were written or co-written by saxophonist/accordianist Kurt Hoffman, no single band voice really dominates. Most of the pieces eschew melody in favor of point and counter-point in ways similar to classical music with some improv soloing. Unfortunately, some of the pieces sound a bit stiff - as if over-rehearsed and no one really is loosening up. One exception is "Nature" - a sort of highlands jig in which the strings provide the main theme and the saxes duke it out for supremacy while the drum plays a odd-metered cadence. It's one of the few songs where the band gets into a complete groove and relaxes.

I also like the rework of an Asian folk song "Ramayana." Drummer Jim Thomas's arrangement sets a misty and dreamy mood and a recognizable melody emerges. The guitar soloes are a little bit flat, maybe overcooked - sort of like when classical guys try to do rock phrasing and aren't really feeling it.

An interesting group that had a sound unlike any other, - it's unclear where they were going to go with it and I'm guessing that live gigs were probably hard to arrange. At any rate, they called it quits in 1991 after releasing a second album. Their second (One - describing perhaps their ability to play well together) came out in the late 80's and included a cover of Led Zep's "Kashmir" -- it's probably what they're best known for. Members of the band played on a cut from They Might Be Giants Lincoln LP ("Kiss Me, Son of God"). And saxophonist Hoffman joined TMBG for awhile and went on to play with Jon Spencer and Frank Black.

PLEASE post the Kashmir cover if you've got it. I've never heard it!

Sorry - don't have the second album (One) - didn't really warm to the Kashmir cover which I heard several times on college radio - and as you can tell I'm lukewarm to this album overall.

If you go to the Trouser Press link above, though, they really liked it.

You can legally download the two albums The Ordinaires recorded at emusic or iTunes.

for what it's worth, the Ordinaires actually gigged a lot -- played regularly at various downtown clubs and art spaces and what have you, and, in a doomed attempt to make it as a pop act, hit the road and did opening slots for Camper Van Beethoven and TMBG.